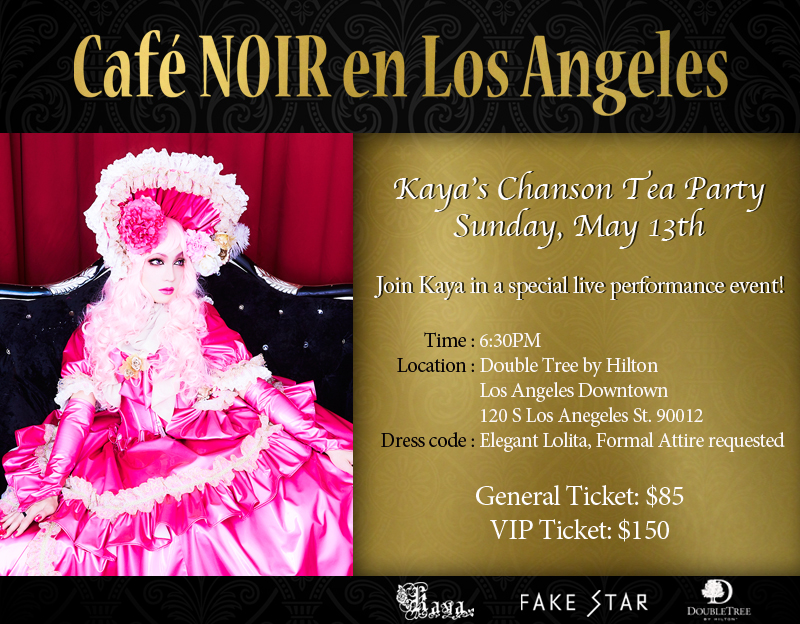 Kaya Returns to Los Angeles This Month with a Concert and Tea Party – Tickets Now on Sale!

Kaya will perform at GAMeBOI on Friday, May 11. Fans will have an exclusive chance to experience Kaya’s latest single FABULOUS and his club-diva aesthetic live! Buy your ticket and be the first of his fans overseas to see the song performed.

Tickets start at $10 and will be available to purchase at the following link: https://bit.ly/2w2Rf1m

The ticket price includes a pasta meal, a selection of desserts, and tea, in addition to a prize raffle. In addition, Kaya will be taking photos at the event as well as holding a live chanson performance.

More announcements regarding events at DragCon are coming soon!

Keep up with FAKE STAR to learn more about these events!

Kaya is a Japanese visual kei singer who is breaking down gender stereotypes with his beautiful voice and attire. In 2002, he and keyboardist Hora formed the gothic industrial unit Schwarz Stein. Signed to Midi:Nette, the label of ex-MALICE MIZER guitarist Mana, the band grew in popularity, but disbanded in 2004. After two years of silence, Kaya and Hora reunited for a one-release session band “another cell” which aided Kaya in launching his solo career in June 2006.

Kaya made his solo debut with the single “Kaleidoscope,” and was so successful that he went on to release 7  albums in the span of his career. He’s had a hand in several other visual kei projects, such as super group Node of Scherzo and Versailles’s album JUBILEE.

In 2014, Kaya reformed Schwarz Stein, and the duo recently celebrated their 15th anniversary. This September Schwarz Stein will embark on a tour in Japan and release a mini album.

Kaya released his newest single “FABULOUS” on April 1st, with a new visual direction gearing up for his appearance at DragCon. Check out the track on Kaya’s new YouTube channel: https://www.youtube.com/watch?v=X80X_VIWsJQ