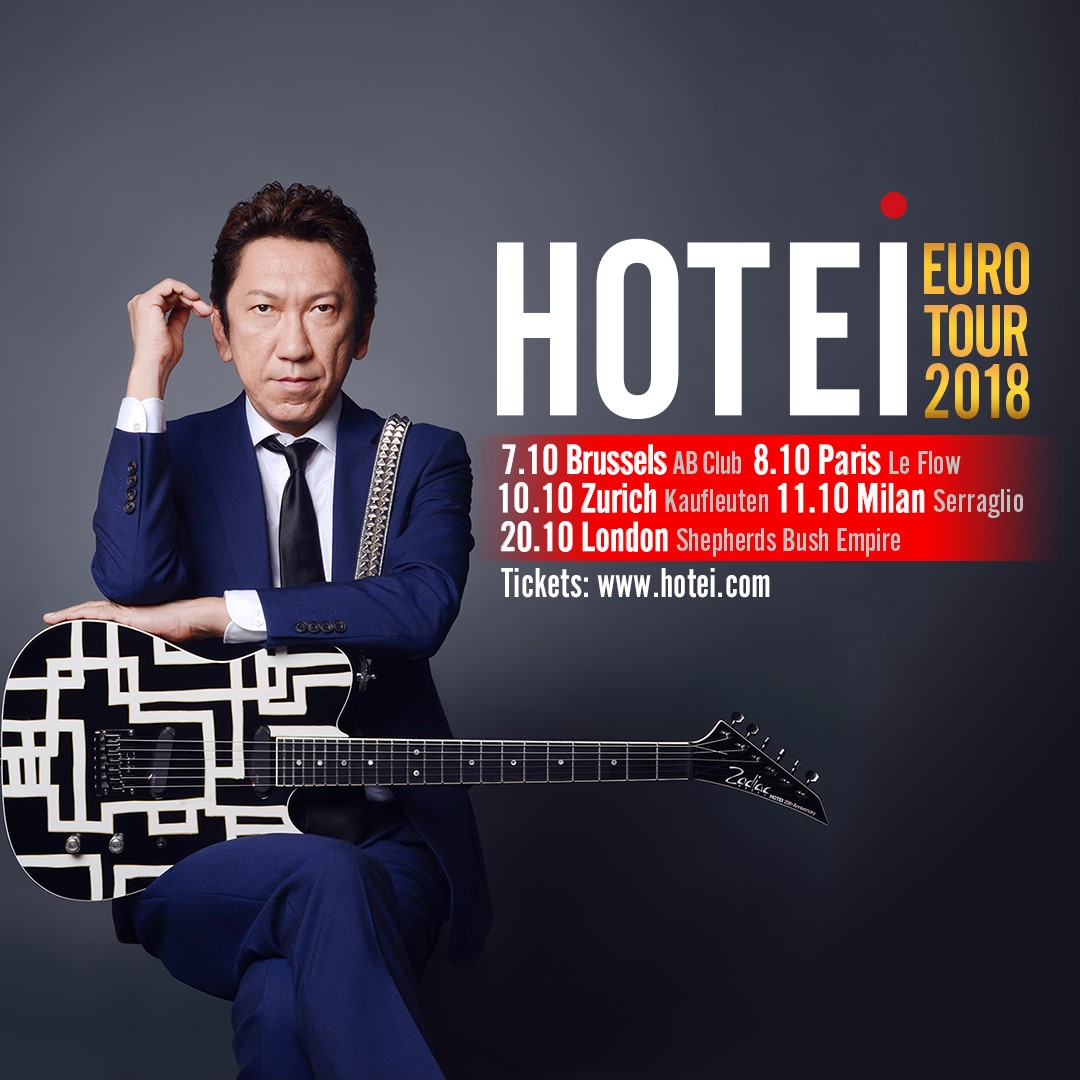 Hotei has enjoyed phenomenal success in Japan as a composer, recording artist and guitarist, with back to back million selling albums, revered stage performances and a reputation for elaborate and exciting stage shows. Worldwide recognition has come via collaborations with other major international artists, and extensive music placements in major films and TV, adverts and games.

Hotei’s career began over 30 years ago in the early ’80s as the guitarist in the legendary Japanese rock band BOØWY (pronounced Boy), who are one of Japan’s best selling and most popular rock acts of all time. In 1988, Hotei established himself as a solo artist, beginning international this new chapter with the album ‘Guitarhythm’, recorded at Abbey Road Studios in London.

Hotei re-located to London in 2013 with his family, to focus on his growing international profile whilst maintaining his significant presence in the Japanese market.

Hotei released his debut international album, “Strangers”, in 2015 through Spinefarm Records, a subsidiary of Universal Music. The collaborations based album features an array of guests including the godfather of punk Iggy Pop, Richard Z. Kruspe from German rock band Rammstein, and Matt Tuck, lead singer of British rock band Bullet For My Valentine.

Hotei toured in USA and Europe in 2016 and 2017 in support of the Strangers album, playing in many international cities for the first time, including his first-ever LA show at the legendary Troubador, and debut headline shows in Paris, Amsterdam, Brussels and Berlin.

In 2016 Hotei celebrated his 35th anniversary in music with the release of a 51 track career retrospective “51 Emotions: The Best for the Future” and an extensive touring schedule in Japan, with 57 dates across the country, finishing the year with his 40th performance at the famous Budokan arena in Tokyo, where Hotei performed 35 songs to celebrate his 35 years in music, a set that lasted more than three hours.

Hotei has collaborated extensively with other artists during his career, including more recently the Rolling Stones, Iggy Pop and Italian superstar Zucchero, with whom he has performed on stage in multiple cities since 2016, including Verona, Milan, London. Hotei organized Zucchero’s live debut in Tokyo in 2016, as well as making a guest appearance on Zucchero’s latest album, Black Cat.

In 2017 Hotei released his 17th studio album, “Paradox”, to great acclaim, and completed a major Japanese tour. Hotei began 2018 writing for his next studio album, alongside multiple music projects including various TV commissions and writing and producing songs for other artists. In July 2018 Hotei joined Zucchero for two spectacular shows in San Marco Piazza in Venice, the first live music concerts to be held there for eight years.