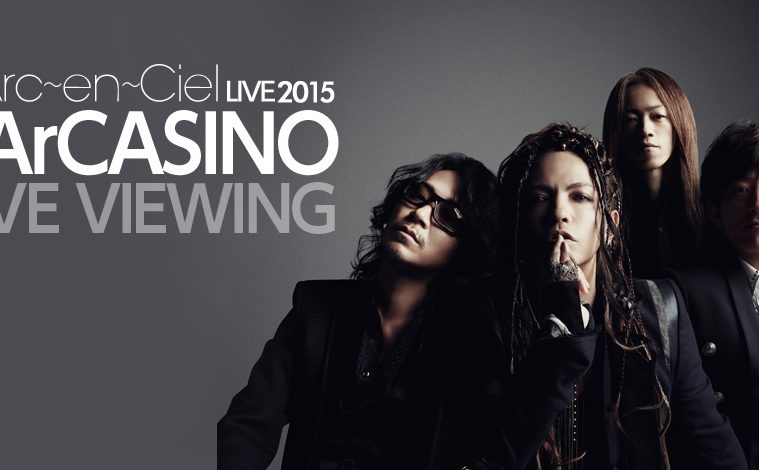 Live Viewing Japan, a distribution company dedicated to introducing Japanese artists of various genres to international theaters, is very pleased to present the screening of L’Arc-en-Ciel’s very first live concert in 2015, “LIVE 2015 L’ArCASINO” (Day 2) to Anthology Film Archives, New York, on October 18th, 2015. The two-day concert to take place on September 21st and 22nd, not only marks the band’s first performance in 2015, but also their long-awaited return as L’Arc-en-Ciel after the last concert held at National Stadium back in March of 2014. “LIVE 2015 L’ArCASINO” is definitely a concert that every music fan should not miss from the super band; if you won’t be able to see it live, make sure to catch the screening and enjoy the same excitement with other fans in the theater!

Comprised of hyde (Vocal), ken (Guitar), tetsuya (Bass), and yukihiro (Drums), L’Arc-en-Ciel achieved blockbuster commercial success with many number one singles and albums on the Oricon charts after their major debut in 1994. The band features a wide range of sounds from hard-rock tunes to romantic ballads. To date, L’Arc-en-Ciel sold over 15 million albums, 16 million singles, and millions of merchandise, including DVDs.

Finding success at home, L’Arc-en-Ciel continued to expand their profile through launching activities overseas. In 2004, L’Arc-en-Ciel made their North American debut at the largest anime convention in the east coast, Otakon, as the first Japanese band to perform at the 1st Mariner Arena, which attracted an audience of 12,000 people. The band embarked on a stunning world tour in 2012, which covered 10 countries throughout Asia, Europe, and North America. Their New York show took place at Madison Square Garden on March 25th, 2012, making L’Arc-en-Ciel the first Japanese artist ever to be the lead act at the legendary venue. The band has conquered the Japanese rock scene at a furious pace, while setting their sights worldwide to keep up with the frenzied response in Asia, Europe, and the United States.

About Live Viewing Japan: Live Viewing Japan is a Japanese-based media distribution company dedicated to introducing Japanese artists of various genres around the world. More information on the company and its projects is available at: www.liveviewing.jp