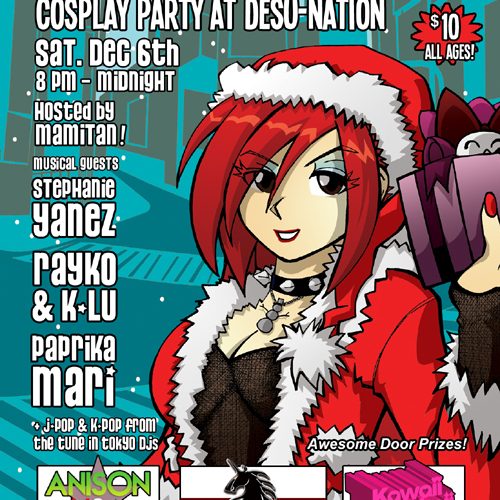 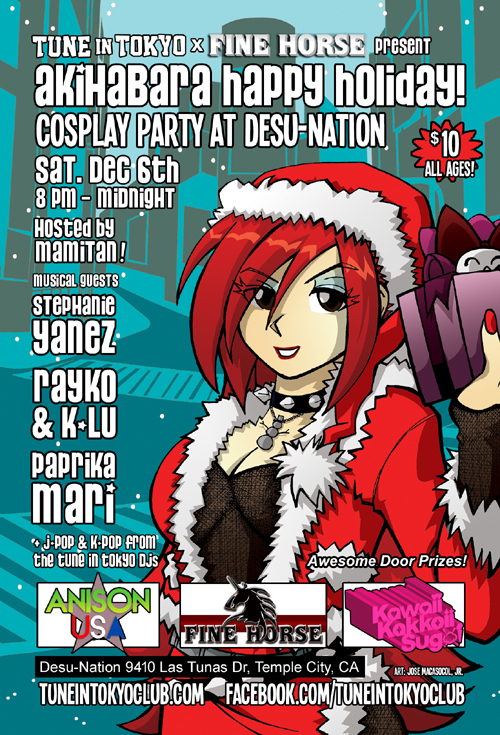 Stephanie Yanez will appear with her full band, presenting a set of her original songs and favorite anime covers, special guests Rayko and K-Lu of epic rock band Lolita Dark will perform a set of holiday classics and anime songs, and we’ll also be joined by Paprika Mari of Candy Bomber for a special number! Tune in Tokyo DJs Greg Hignight, Ally & Tommy Pedrini will keep the night moving with a mix of J-Pop, K-Pop and global dance beats!

All kinds of cosplay are encouraged (but not required)!

About Fine Horse
Fine Horse produces custom made costumes, props, and cosplay goods with an emphasis on quality and the best craftsmanship. Every costume is custom made by their skilled team of tailors and prop makers. For more information, visit https://www.finehorsecosplay.com

About Stephanie Yanez
Stephanie Yanez is a pop singer who fuses American and Japanese music genres. She has released music in Japanese and English, toured the United States and Japan, and performs regularly with her band in Los Angeles. She officially collaborated with Crypton Future Media’s Hatsune Miku with “Ultimate Miku World”, an exclusive song and animated music video by TinierMe. Her TV appearances have included Tokyo Reporter for Anime Select’s Comcast On Demand documentary, the series “Crazy Sexy Tokyo” and “Spesha Area Space Shower TV”. She currently models for the Japanese brands galaxxxy and Rilakkuma, and has also modeled for Hello Kitty, Aymmy in the batty girls, and Miss Alphabet, in addition to serving as a spokesmodel for Aniplex USA. For more information, please visit http://stephanieyanez.com

About Paprika Mari
Paprika Mari is the lead vocalist for Candy Bomber, a multi-genre pop band based in Los Angeles, California. Her roots in both the U.S. and Japan helped to shape her musical sensibility, reflected in the band’s playlist that spans Japanese and American rock, pop and jazz. In addition to being a staple in the LA Asian Indie rock scene, Paprika Mari and Candy Bomber have performed at anime conventions across the U.S. and other events. She is also an avid cosplayer, Japanese fashion enthusiast and licensed mixologist known for creating anime-inspired drink tutorials. Follow Paprika Mari on Facebook at https://www.facebook.com/4649PaprikaMari, and for more on Candy Bomber, please visit https://www.facebook.com/TheCandyBomber