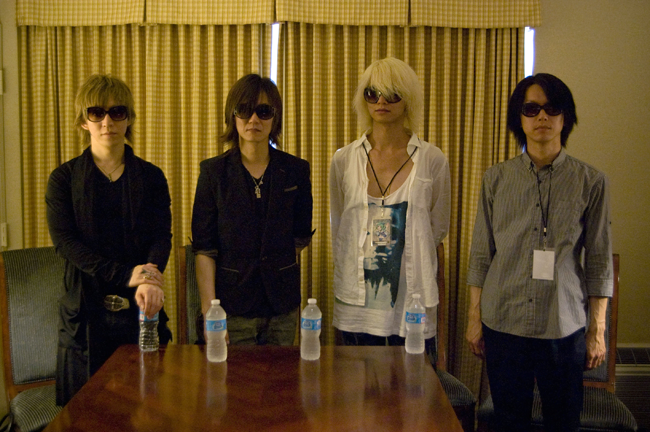 Moon Stream participated in a round robin style interview with 3 press outlets present. JrockReovlution was able to ask the following questions, with most of the other outlet’s questions summarized. All four members who performed were present (including bassist Poel and drummer Takaya (ex. Romance for~)), although mainly Satsuki and Tomo answered.

JRR: Moon Stream has performed in various cities in North America as well as Europe. As Japanese artists, do you see a change in how your music is accepted internationally, currently?

Tomo: You were at the concert last night, right? You noticed Satsuki sang our new song in English. We are trying to do more concerts in the United States and focus on the English lyrics. I think you can expect more songs from us in English.

The mascot of Moon Stream is a plushie named Apollo, design by Satsuki. It has a moon symbol on his head, and considered a cat because Satsuki loves cats.

When asked how it felt to have performed the first song as Moon Stream, Tomo said they have been working so long on that song, and now they are very happy to release the song at the convention. Moving forward he predicts smooth sailing.

JRR: What are some of the good things about being in a band as opposed to being solo and vice versa?
Satsuki: Solo is lonely. Band is more energy. That is difference. Solo can decide everything by myself. It’s good thing for me, but, feel lonely.

Tomo: I have worked as Heaven’s Factory as my solo. Solo has freedom but at the same time, you have to organize everything by yourself. That’s a pain in the ass. You don’t have another idea to help you, everything is from only here. [points to head] The band has different ideas put together, a chemistry, a different effect. Sometimes, a bad idea, and a bad idea can cross and it becomes a good idea. That’s a very interesting thing. But at the same time, there are different personalities, so it can be hard to organize.

Satsuki feels that fans all over the world are similar, and that it’s a pleasure to play for fans anywhere.

JRR: What is some advice you may be able to give younger bands looking to break into the international market?

Tomo: Don’t go into music, get a real job. [laughs] Everything has pros and cons, good things and bad things. I don’t want to push anyone, “You should do music!” or “It’s awesome!” I can’t. But if you like it, if it’s a passion, you should follow your passion. Or, you will regret it in the future.

Where do you gain your inspiration from?

Satsuki: Inspiration comes from within.

Tomo: There is so much information in the world, the internet, the news, Facebook, Twitter. We get so much information but so much sad news too. I know I can’t change everything. But my songs, my words may stay in your heart somewhere, I want to make that type of music. Strong music.

JRR: Satsuki and Tomo, [you] modeled in the fashion show at Anime Next – if you were able to collaborate for fashion, would you gravitate to something visual, chic, gothic or something else?
Satsuki: Fantasy style.

Tomo: I would like to do some weird stuff, sort of mod style. Avant-garde style. Weird hair shape. Branches on the body, a tree in the hair.

Moon Stream stated fans can expect a single out soon. Satsuki said, as soon as possible! Tomo asked fans to remind the band about the single, to say to them on Facebook, “You are working on the new music, right?” “Oh yeah, right! I’m gonna call Satsuki now! I almost forgot!”

What is something you can’t live without?

JRR: Do you have any rituals before a show, such as physical or vocal exercise?

Tomo: I do stretches-

Tomo: I go crazy on stage, I don’t want to get hurt.

Special thanks to Moon Stream for their gracious time.