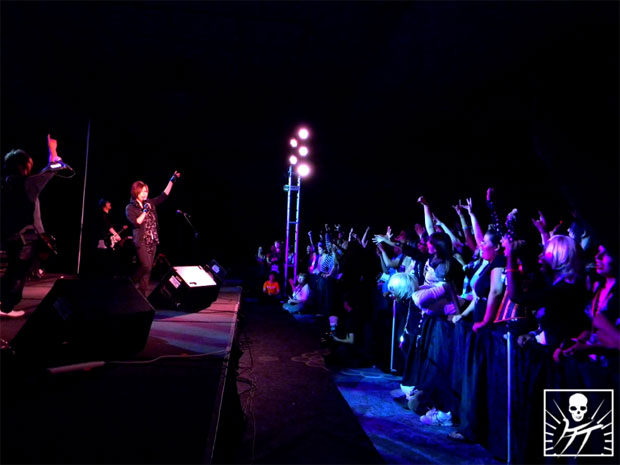 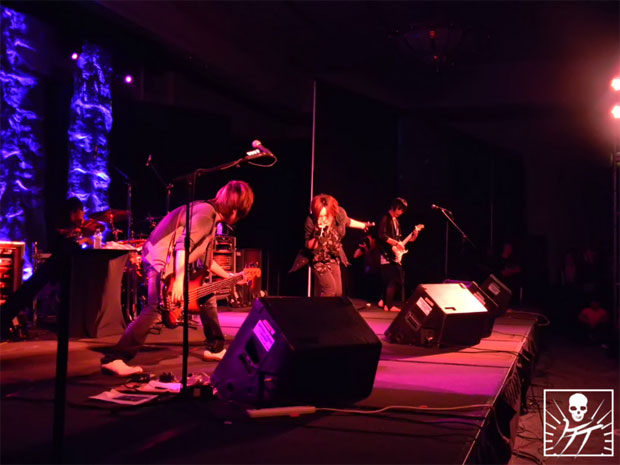 Well before the heidi. concert started, a long line of people, fans and non-fans alike had already congregated in front of the Ballroom where the Eyeshine concert still went on.

Once inside, it was even more surprising to see there was already about three rows of people lined up in front of the now empty stage waiting for the anticipated performance from heidi.

Anime Weekend Atlanta 2012 marks the return of heidi. to the American convention scene after their debut at AM2 in Anaheim, California last year. It is incredible to see their popularity rising since then, even with the Southeast audience who is rarely familiar with Visual kei music and lifestyle.

As people continued to pour in, the first one to appear on stage was Kiri, heidi.’s drummer, doing a little warm-up sound check before the concert began. It was barely 10:30 pm, yet there was already so much energy generated from the audience. Screams and cheers here and there from the crowd got Kiri going for about 10 minutes until he decided to walk off the stage which prompted everyone to get ready for an exciting live ahead.

One by one, heidi.’s band members appeared on stage, carrying the most confident expressions on their faces. No one could tell they were nervous, as stated later on Kiri’s official blog. Even though this would be their second performance in the States, it was an entirely different crowd, region, and people. Despite that fact, all the members put up the best they had and brought together the most exciting live for their American fans.

The venue was small, like those of live houses in Japan; giving off a very intimate energy between the band and the audience.

Even though numerous sound checks were done beforehand, the sound quality was not as expected. Yoshihiko’s powerful voice could barely be heard over the overwhelming bass and guitar. Perhaps that was the only flaw of the whole live, whereas the rest of the performance was spectacular. Yoshihiko interacted a lot with the crowd, sometimes in English, sometimes in Japanese. At one point during the live, Yoshihiko stopped for an MC and stated in Japanese, “I’m Japanese, so I don’t really understand English…but…” and then in a loud voice that could be heard in English “I love you!” Immediately, the band and the crowd were able to communicate their energy so well that the live could have gone on longer than scheduled.

Guitarist Nao and Bassist Kohsuke also put on their best effort to get the crowd all hyped up. Even though Yoshihiko and Nao did not have any shoes on, it seemed they did not care about that fact and just moved around the stage as they got the crowd excited, treating the stage as though a sacred place. There was so much energy going back and forth between the band and the audience which did not only just consist of heidi.’s fans alone but also common con-goers and curious people, who would possibly turned into fans.

After the last song ended, with multiple shouts of “Last song!”, the band retreated backstage. However, the crowd did not move one bit, and the screams of “Encore!”; some in English and others in Japanese, were slowly getting louder and louder. The audience obviously did not want the concert to end yet!

And to return the undying love from their audience, heidi. returned on stage for the encore, which synched perfectly with the crowd, and was possibly the best song played that night. By then, the band and the audience were one, moving to the music, the universal language that knows no barrier, and no one wanted it to ever end.

The band commented that AWA definitely was a better crowd comparing to AM2, energy-wise. They were telling the truth, as stated later on Kiri, the drummer’s official blog. Their popularity is skyrocketing as one of the most original Visual kei/Angura kei out there; at least in the States, for sure.