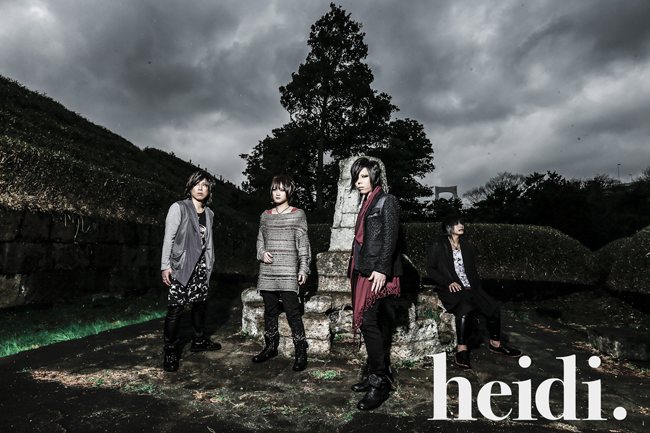 heidi. will be performing at Pacific Media Expo this November 7-9, 2014. From PMX’s website:

Featuring a darkly elegant musical style reminiscent of older Japanese melodies filled with jazz and rock, the four members of heidi. are proud to make their return to the U.S. for a performance at Pacific Media Expo. On top of performances at such high-profile events as hide Memorial Summit (2008) and V-Rock Festival (2009), the band has also made their mark outside of Japan at anime conventions in America including AM2 (2011) and Anime Weekend Atlanta (2012), and has even toured Europe (2014).

In addition to their active and impressive gig history, the band has earned notoriety for their contribution of two ending theme songs, “Yokan” and “Loop,” to the Japanese animation series Kaichou ha Maido Sama! (My Student Club President is a Maid!), available from Sentai Filmworks under the title Maid Sama!, as well as the main theme of the movie Mae Bashi Visual Kei, “Gekkou Showtime.”

For more information, check out: http://pacificmediaexpo.info/2014/index.php?option=com_content&task=view&id=617&Itemid=44

As a special bonus for fans, heidi. is offering lucky packs and VIP options. Some of both are still available. Check out their indiegogo campaign page for more information here: https://www.indiegogo.com/projects/heidi-at-pacific-media-expo-2014