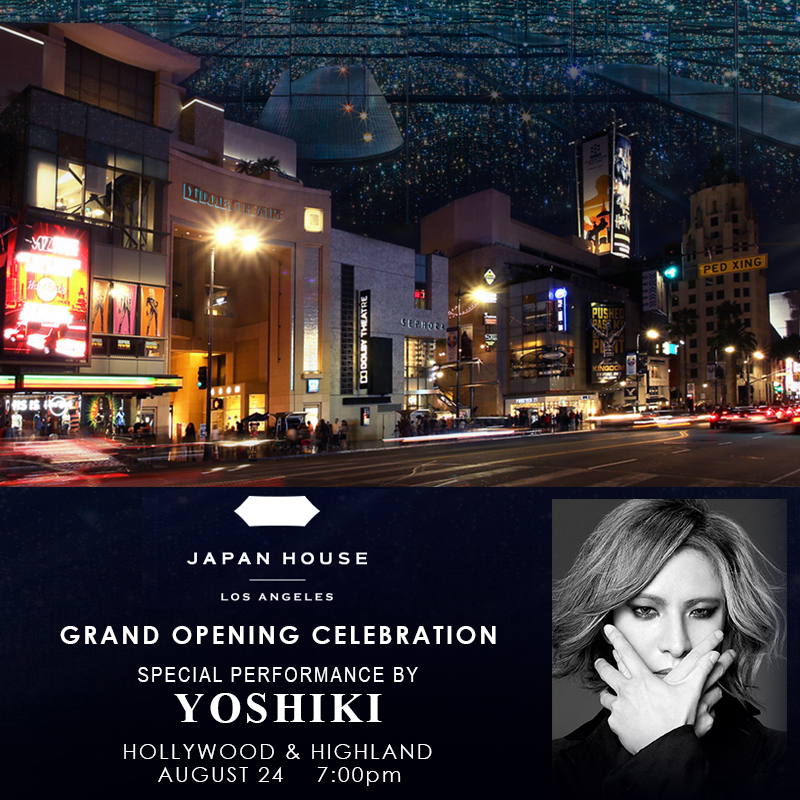 Japan House Los Angeles is a premiere venue designed to showcase Japan’s art, culture, business, technology, and entertainment to help strengthen cultural ties between Japan and the world. YOSHIKI serves as an advisor for Japan House along with honorary advisor Larry Ellison. With facilities in London and São Paulo, this will be the first time Japan House will open its doors in L.A.

YOSHIKI has been invited to give a special congratulatory performance at the unveiling of the newly-completed facility, which will include a special cocktail reception and a seated dinner with international government, business, and cultural leaders, including the Ministry officials of Foreign Affairs of Japan, the Consul General of Japan, and celebrities.

Demonstrating his commitment to the mission of Japan House, YOSHIKI personally made arrangements for a limited number of American fans to attend the private event in the unique, intimate setting in Hollywood. YOSHIKI announced the invitation today on his official Instagram, and applications for the rare passes surpassed the capacity limit just minutes after he posted the news.

YOSHIKI’s performance at Japan House Los Angeles will take place just hours before he returns to Japan to appear on a major TV program in Japan which has not been announced yet.

Yoshiki will then begin his second set of sold-out dinner shows “EVENING WITH YOSHIKI 2018 IN TOKYO JAPAN 6 DAYS 5TH YEAR ANNIVERSARY SPECIAL”. He began the anniversary shows last month, and this 2nd half will complete the 10 shows over 6 days, which also includes his charity fundraising through his 501(c)(3) Yoshiki Foundation America.