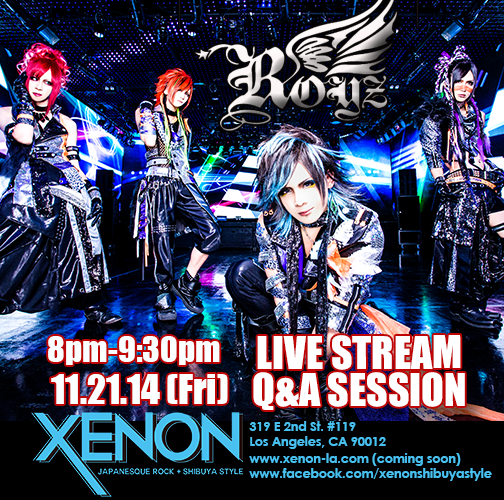 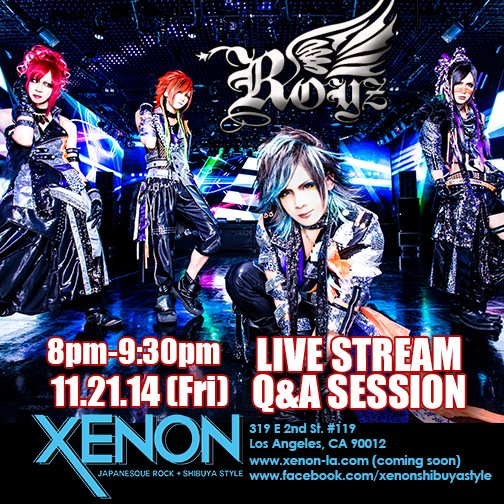 Fans are able to ask questions to the band directly through live streaming chat, as well as answer questions from the band. This is a great opportunity for fans in the States to engage and gather new upcoming information’s from the band.
No cover fee will be charged, absolutely free event. Hours for the event will be from 8:00pm-9:30pm

ABOUT Royz: Royz is a visual kei band formed in 2009, with a concept “to be catchy”, and they wish to make music that appeals to all different kinds of people. At the beginning of 2011, Royz toured with the band Kiryu from February to April. As a result, the band joined B.P.RECORDS on April 1, 2011 and moved from Osaka to Tokyo. Яevolution to New AGE was released on November 30, 2011. Their 1st album was well received and made it to #1 on the weekly Indies Oricon Charts. Their 8th single “EGOIST” was released on July 3, 2013 and was ranked #1 on the weekly Indies Oricon Charts. Their 9th single, LILIA, was released on January 15, 2014, which was then followed by their spring one-man live tour Red Desire LILIA. On April 30, 2014, Royz announced the release of their 3rd full length album entitled 「CORE」which was released on July 2, 2014 followed by a nation-wide one man tour from July 3rd to September 13th. At the end of their one-man, they announced the release of their 10th single entitled “Supernova”
Website: http://royz-web.net/