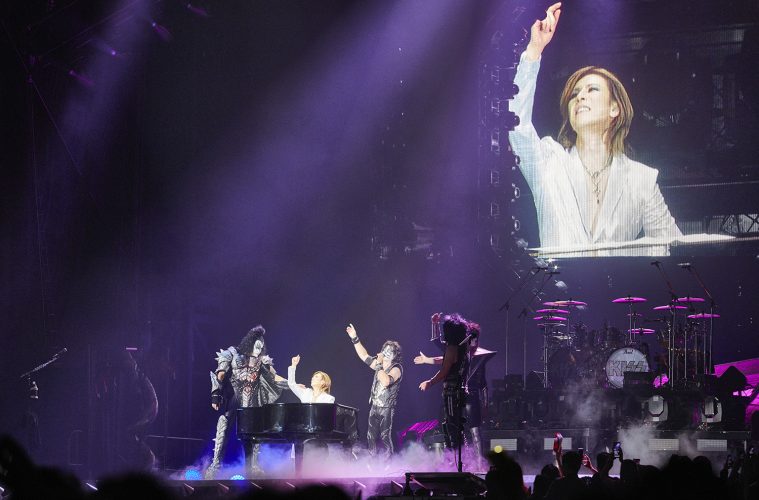 YOSHIKI appeared as a surprise guest on December 11 during the Tokyo Dome performance of KISS’s “End of the Road World Tour”. He shocked the audience by performing piano and drums for two songs during the encore of KISS’s only Tokyo show on the band’s “Final Tour Ever”.

YOSHIKI – composer, classically trained pianist, rock drummer, and leader of the rock band X JAPAN – was welcomed to the stage by KISS vocalist and guitarist Paul Stanley. The two men embraced before YOSHIKI sat at the piano to perform “Beth”, KISS’s highest-charting single in the U.S., prompting screams of excitement from the audience that shook the stadium.

For YOSHIKI, KISS was a life-saving force in his childhood as he dealt with the despair caused by the sudden death of his father. “KISS saved my life… Tonight, my dream will come true!” YOSHIKI posted on Twitter just hours before the show.

Through KISS’s music, YOSHIKI learned that the pain and sorrow that had accumulated in his heart could be cleansed through rock. YOSHIKI, who had studied classical piano throughout his youth, became attracted to drumming as a way of releasing his emotional pain.

YOSHIKI connected with KISS to create a 72-piece orchestral cover of “Black Diamond” for the 1994 tribute album Kiss My Ass: Classic Kiss Regrooved, and Gene Simmons joined YOSHIKI on stage to perform “Rock and Roll All Nite” at the 2016 Visual Japan Summit in Tokyo.

Stanley announced “We are so honored to have him play with us” before they began the final song. YOSHIKI gave his heartfelt thanks to the band: “I’m here today thanks to KISS.”

YOSHIKI will also perform with KISS at their Osaka performance at the Kyocera Dome on December 17.