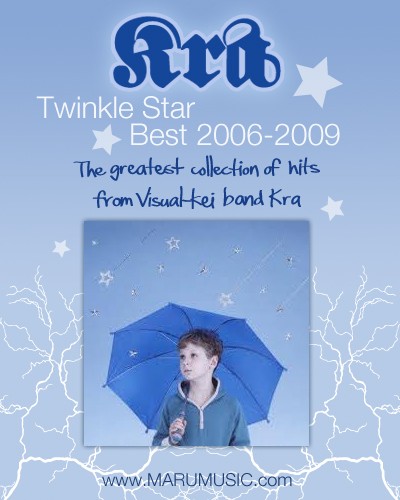 Visual-kei Superstars Kra set to Release album in the US

[Los Angeles, CA] – The hit Visual-kei band Kra is set to release their collection album Twinkle Star BEST 2006-2009 in the US thanks to Maru Music. This album is a collection of Kra’s latest hits along with earlier favorites. With their bright and more upbeat style, this album is sure to have listeners shaking their heads and stomping their feet.

Twinkle Star BEST 2006-2009 contains 11 tracks and features Kra’s best so far. Featuring many hit singles including Artman and Love Lab, Twinkle Star BEST 2006–2009 provides a Visual-kei experience unlike any other. Many of the songs on this album were previously available only on single releases or from other albums.

Since their formation in 2001, Kra has been producing the same Visual-kei music since their humble beginning. Immediately making a name for themselves, Kra has released a number of hit singles and albums in Japan. Kra has also headlined many concerts at major venues across Japan including the C.C. Lemon Hall.

The four members of Kra features Keiyuh on vocals, Mai on Guitar, Yuhra on bass and Yasuno on drums. Unlike most visual-kei bands being dark and heavy, Kra carries more of a light and colorful appearance. Their music is a mix of rock, pop and a little bit of jazz. With an upbeat and happy sound to match their colorful look, Kra continues to gain a loyal and enthusiastic fan-base.

As Kra’s popularity began to increase, Alice Nine began to participate in numerous major events across the globe. In 2007, Kra participated in their first overseas performance as part of Germany’s event the JRock Invasion. In 2009, Kra was also part of the largest Visual Kei festival in Japan, the V-Rock Festival, performing alongside many headliners including Alice Nine and the Gazette.

Maru Music (marumusic.com) is the leading media company, bringing the highest quality, Visual Kei, Jrock and Jpop to North America. A full-service media company based in Los Angeles, Maru Music provides the best in CDs, DVDs, Band Merchandise and Live Performances. Maru Music would like to thank the fans for their continued support and will continue to build a community around our common love of JRock.