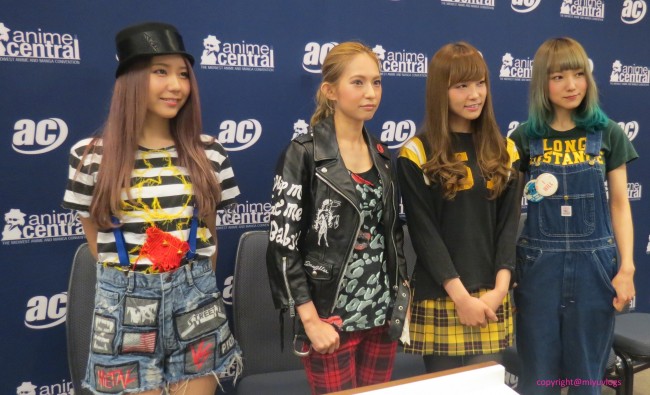 Q: So, just finished Europe Portion of the tour, How does that feel?

Scandal: It wasn’t our first time in Europe. We played a show in Paris at an Anime Convention. We played at a live Venue, and some fans were not just fans, but people who came to check us out.

We totally thought that people would be more into Anime theme songs but we were surprised and happy to see it was more.

Scandal: We’ve actually toured Asia as a headliner. For Europe, and US this is our first headline tour. We’ve toured the US but that was 7 years ago, and right now it’s like going back to basics.

Compared to 7 years ago it was different  but now, we just released a new album called “Hello World” and as we said it’s back to basics.  (They also commented on  Chicago’s deep dish pizza)

Q: What is  the difference from Japanese fans vs. American fans.

Scandal: Prior to going on stage we got a Scandal chant from the audience and we don’t get that in Japan. In Japan when the light goes on that’s when we get the chant. The Audience here was very lively as well, and they are good at using the concert venue.

Q: What is your favorite venue, and what do you plan to do after the Hello World tour?

One of the most memorable venue was in Taiwan, and we were blasting AC but even the wall was still sweating , and the floor was wet.

Q: Are there Anime that are your favorite that you want to make music for?

Scandal: All four of us growing up. We weren’t fond of Anime. Creators of Anime came to us, and that’s how we got into Anime, and wanted to be a part of it so we started to watch some. We just worked on Pokemon, and it was very popular, and it was great.

Q:What inspired you to pursue music?

Scandal: We all went to a dance, and vocal school, and at that time we didn’t have a passion or we didn’t have the experience to play so our teacher told us to pick up an instrument to give it a try.

Q: Who would you like to collaborate with in the future?

Q: Would you be interested in doing music for Video games?

Scandal: Again, we’re not really a gamer, but we have done one game in the past.

Well we say we’re not gamers but Tomomi plays games, and curious about how games are made, and the sounds.

Q: Everybody goes to Tokyo. Would you be interested into moving to Tokyo.

Q: What is the most stressful thing you have encountered and what is your advice for aspiring artist?

Scandal: We have our hardships in our daily hardships in life but I think our turning point was the street performance in Osaka, and just keeping to have the will to move on.

There was a time performing on the streets even when there wasn’t anyone there.  Back in the day we weren’t writing our own songs, and it didn’t seem like it came from the heart, and people didn’t see us as a real band. Now all 4 of us write our own songs and can present it to the world.

Q: What inspires your fashion?

Scandal: We actually have a totally different taste in fashion.

Tomomi: If you take a look at myself I have an interesting hair color. I tried red, orange, purple, green. The base is blonde, ash gray, and blue. So everytime she finds an exotic fruit type color she wants to try it.

Rina: Actually I’m inspired by a lot of movies. This is from the 80’s from a movie. French style. I got to a lot of vintage shops.

Haruna: So we just started our official instagram. You see real live people, and taylor swift. I check out instagram to see the latest fashions. (Taylor’s)

Mami: I actually don’t have a person who inspires me. I like going to different shirts, and London based motifs.

Q: What inspires you to write your lyrics/music?

Scandal: We just talked about how we’re influence for Greenday and Foo fighters, and kind of have a obsession with them. We saw the documentary, and saw that it was the same thing as it is for us which makes me feel happy and confident.

Q: As an all-female band, did you find difficult to enter the  industry?

Scandal: Actually in Japan we never came across any hardships. Coming to overseas we notice that there aren’t any girl bands. Being a girl and being in a band is tough but we have one life, and should just try to pursue their dreams, and go for it.

Q What is your favorite part of this experience?

Scandal: Playing music and traveling are the best part of it. If we weren’t in this position we wouldn’t have met the people we have or travel to places like Chicago.

Q: Have you ever wanted to pick up a different instrument?

Scandal: Tomomi knows how to play drums but it’s more of a hobby. We tried it but it just didn’t work out.

Q: where else in the US would you like to travel?

Scandal: When we came to the US and we went to Denver. There was something that was wrong with the venue and we couldn’t do Denver so we would like to revenge [revisit?] Denver.