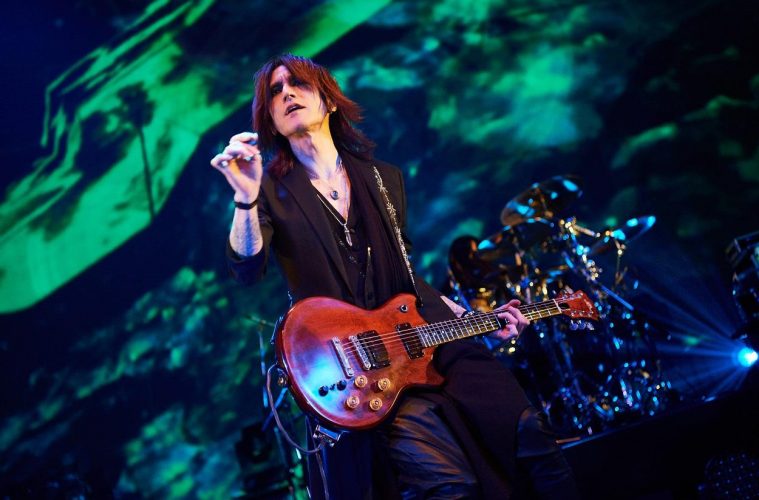 SUGIZO (LUNA SEA, X JAPAN) hosted the final of his concert tour “Unity for Universal Truth” at Zepp Tokyo on December 6th last week. This tour commemorates SUGIZO’s 20th anniversary for his solo debut, and three of the industry’s top vocalists each performed a song with him as guest vocalists — ToshI (X JAPAN), RYUICHI (LUNA SEA), and Kiyoharu (Kuroyume, sads).

SUGIZO had just released the album “ONENESS M” at the end of November which features an extravagant list of well known vocalists such as Kyo (DIR EN GREY/sukekiyo), TERU (GLAY), and MORRIE (DEAD END/CREATURE CREATURE) in addition to the three listed above.

The concert tonight was split into two parts: The first part showcases a setlist made up of SUGIZO’s mainly instrumental songs, while the second part features the guest vocalists and the new songs on his latest album.

((First part))
Ambient music filled the venue to a sold out crowd, with flashing white lights accompanying the music and a graphical video playing in the back. The members appeared on the dark stage to an excited crowd cheering their names. The first song, “IRA” focuses heavily on a thundering rhythm and SUGIZO’s guitar reverberating throughout the venue. A short MC came after the first song, with SUGIZO first apologizing to the fans for having them wait outside in the cold for thirty minutes more than expected, and him introducing the special make-up of the show that night. Following up, he said, “It’s cold outside, but you’re gonna get a hot and excited psychedelic “super SUGIZO” here, non-stop. Today, let all of us ascend together to a “‘SUGIZO kind of universe’. Let’s all go together, alright?” He then introduced the next song to be a 20-year old track, “THE CAGE,” from his first album released in 1997.

The lights flashed red for the song, with SUGIZO doing some vocals for the track. When he wasn’t singing, he was moving left and right on the stage and spinning. The crowd cheered loudly after the song, then a wing motif showed on the screen for the next song, “MESSIAH”. The crowd clapped along to the rhythmic bass and drum beats while SUGIZO’s guitar rang playfully amidst red and purple lights. The crowd excitedly waved their arms in the air as SUGIZO drove the crowd. It’s one of those songs that easily gets anyone listening to it to bob their head along, whether they knew the song before or not. The crowd gets even more united, clapping together for the next song, “NEO COSMOSCAPE” as blue lights flashed wildly across the stage, welcoming a percussionist on stage as usual for the song.

Entering the middle of the first part of the set, a video of water and fish swimming fittingly set the mood for the serene feeling of “ARC MOON”. SUGIZO’s clean notes and clear tone was like a fish swimming in the water, enchanting all listeners present. Follow this very visual presentation, was “FATIMA,” which featured an aerial dancer clad in a flowy white robe dancing high above the stage to SUGIZO’s equally flowing violin melody. “Lux Aeterna” then followed, with a black and white video playing in the background of children and refugees from war-torn areas. The message if followed by “ENOLA GAY RELOADED,” with SUGIZO waved a huge flag that says “NO MORE NUKES PRAY TO MUSIC.” as the aerial dancer, this time clad in black, performing an aerial hoop dance above the stage.

Things got heated up again with sparks flying from the drums on far stage right and flashing white lights for “Decaying,” which features a prominent drum part. Then the drums got even faster, heavier and more powerful for “禊”, this time featuring Japanese instrumental elements as well as the percussionist on drums center stage once again. After this, bright lights flooded the venue, with SUGIZO center stage showing off not only his guitar skills, but his unrivaled presence and charisma as one of the leading guitarists in the scene. Fans burst into loud cheer and followed suit when SUGIZO had his hands up in his signature Vulcan salute and announced “Last Song!” The main set with the indeed psychedelic and upbeat song, “TELL ME WHY?” Fans waved their hands and danced in unbelievable unison as SUGIZO ran around the stage. SUGIZO wrapped up part one of the night, saying “Thank you, Tokyo! Thank you, everyone, you were all great. It was amazing.” before introducing all the members performing that night, and then gathering center stage to bow together. 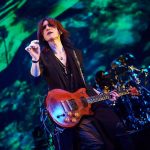 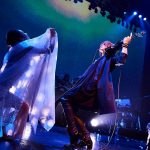 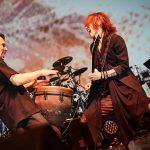 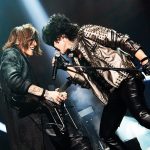 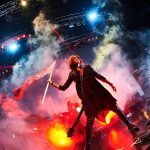 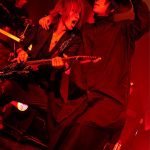 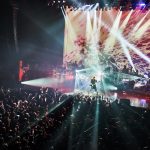 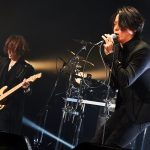 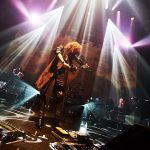 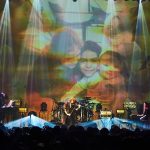