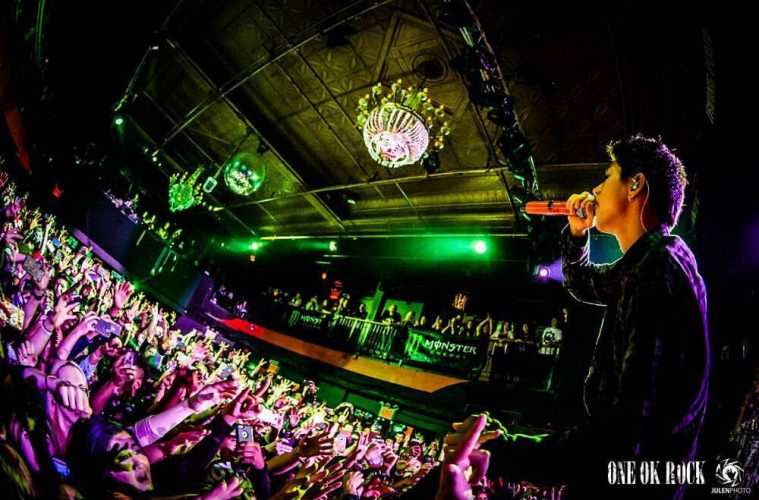 ONE OK ROCK with Issues in NYC 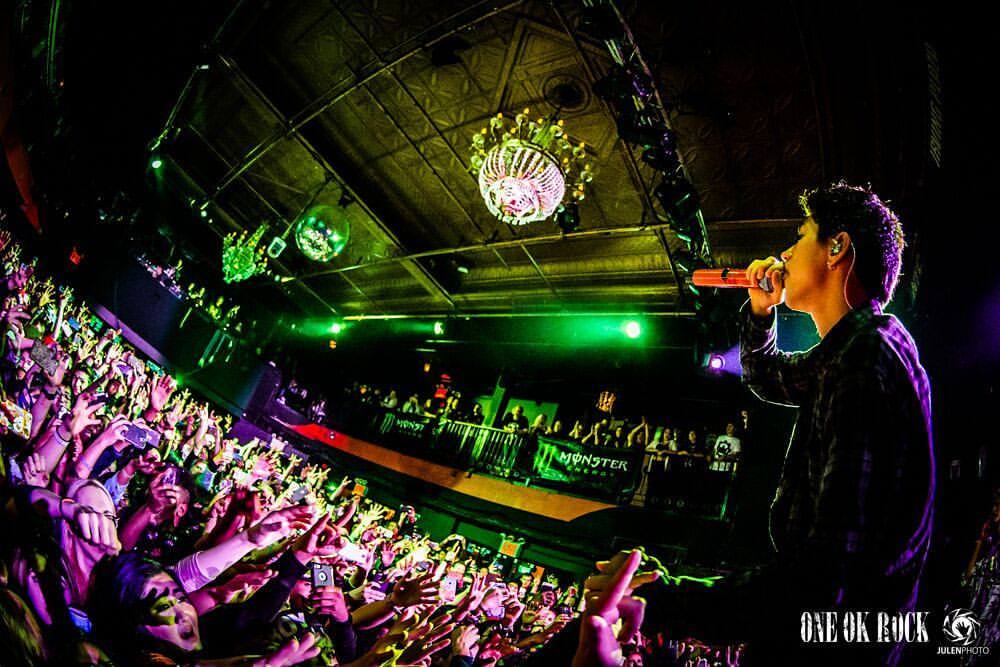 ONE OK ROCK was the second opening band on the Monster Energy Outbreak Tour Presents: Issues, but you wouldn’t have known that by the passionate crowd reaction in New York City on April 11, 2016.

Irving Plaza is the smallest stage ONE OK ROCK has performed on in New York City, previously performing twice at the Playstation Theater (formerly Best Buy Theater). The stage size didn’t stop them from putting on a short but sweet 6-song setlist.

Drummer Tomoya came out to check his drums after the first opening band had finished, and already the crowd were screaming for the band. A few even called out his name, hoping to gain his attention. As soon as the lights dimmed, the crowd surged forward. The screams of band members’ names could be heard as Tomoya, bassist Ryota, guitarist Toru, and finally front man and vocalist Taka emerged.

The energy skyrocketed and those who weren’t familiar with the Japanese rock band didn’t know what hit them. It was easy to tell who was a ONE OK ROCK fan and those who stood there bewildered at how a band from Japan would command such attention when they are only the second opening band. Whether you were a fan or not, it was hard to ignore their presence.

They started off with an intro song of just drums and bass, with the guitar joining in moments later as Taka walked onto the stage. Cell phones were held high in the air to capture the moment. “What’s up New York?!” Taka yelled as they launch into the first song of the night, “Take Me To The Top.” In the chorus, there is a part that goes “woah woah woah” and remarkably, the audience sang this part back to Taka as he held out the microphone. “I wanna see your f*ckin’ hands!” and everyone put their arms into the air.

“What’s up everyone? We are ONE OK ROCK. We’re so happy to be here. We only have a short time, so let’s make it a good one. Are you ready?” Taka gave his MC’s completely in English throughout the night and he spoke frequently.

At the last verse of “Cry Out”, Taka said, “If you know this song, please sing along. Let’s make some noise New York!” The lyrics go, “Shout it out now! Shout it out now!” and the audience did shout it out and clap along.

On their latest album, 35xxxv, ONE OK ROCK did some collaborations with other artists including Issues – who are headlining this tour. For the song “Decision,” Tyler Carter of Issues came out to sing the song along side Taka. Everyone suddenly paid attention to the stage, seeing as Issues was the band most people were there to see.

ONE OK ROCK put on such a high-energy show; if you’re in the front, middle, or back at the bar – you can’t help but feel their energy. Ryota especially gets very into the music, his stance wide as he drops his bass low to play and rock out. Ryota, Toru and Taka all headbang and whip their hair around often.

“Show me a circle pit!” Taka yelled during the instrumental break in “Suddenly,” as he twirled his finger around in a circle – the universal symbol for, “I want a circle pit right here, right now.” The crowd was too densely packed to create a circle pit, unfortunately. As the next song started, Taka tried again to get a circle pit going but to no avail. You might say the crowd was “Stuck in the middle” and couldn’t form the pit.

The last song of the night was “Mighty Long Fall” which seemed to have the greatest reaction. It has a slow build; the slow beginning when the audience was calm leading up to the chorus and everyone went crazy and let loose! As ONE OK ROCK’s last song of the night, fans tend to let all their remaining energy go!

At the last chorus, Taka jumped down to the barrier and reached into the audience. He held onto someone’s hand as he screamed the ending of the song into his microphone. “Thank you so much New York!” The band each waved as they walked off the stage, finishing their set.

It seems like ONE OK ROCK were a good pairing for this tour with Issues. A lot of the audience seemed into them and even those who weren’t familiar with ONE OK ROCK before may have become fans.

In my opinion, ONE OK ROCK are slowly bringing Jrock back into the American scene and making people pay attention. This is their third tour in recent years as an opening band for an American band tour (including Yellowcard and All Time Low/Sleeping with Sirens tours), so they are clearly doing something right. What does the future hold out for ONE OK ROCK? Only time will tell, but it seems promising.

Photo courtesy of ONE OK ROCK social media and JulenPhoto.