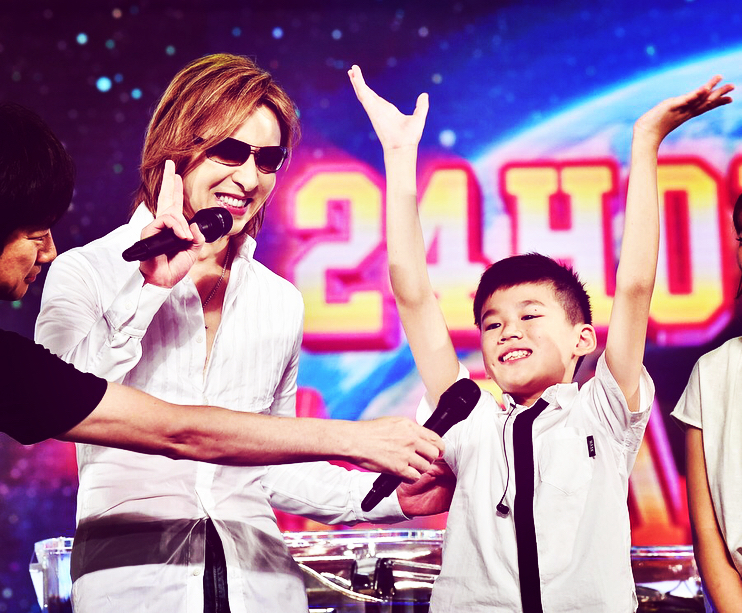 aliAugust 30, 2018
Jrock NewsNews0 Comments 0
YOSHIKI made his first appearance on 24 Hour Television’s “Love Saves the Earth” on Sunday, August 26th, with a moving performance on the stage of Nippon Budokan alongside a blind 11-year old boy.

Hibiki Sakai developed a childhood cancer called binocular retinoblastoma two months after his first birthday, and he lost his sight completely before the age of two. The theme of this year’s season of 24 Hour Television is “people who change the lives of others”, and YOSHIKI spoke about losing his father at the same age and how music enabled him to escape from an abyss of despair.

Excited to help young Hibiki on the first step of his dream to “inspire the world with courage as a professional drummer”, YOSHIKI rushed to Japan on the 26th immediately after performing at the grand opening ceremony of Japan House LA in Hollywood. Because of an unexpected airport delay, YOSHIKI arrived just in time to make it to Budokan.

After a video showing Hibiki visiting YOSHIKI’s Los Angeles studio, YOSHIKI joined the young boy on stage and slowly guided his hand to the drums. With YOSHIKI standing behind him, Hibiki played X Japan’s famous song “X”. Later, “Endless Rain” provided a moving finale, with the two musicians playing alongside one another and the entire audience at Budokan singing along.

During the broadcast of the performance, “YOSHIKI” ranked first in Twitter trends, and the program’s TV audience share jumped to a high of 28.7%. YOSHIKI also announced a 3 million yen donation to charity through Yoshiki Foundation America, just weeks after the musician donated 10 million yen to areas in Western Japan affected by heavy rains.

After appearing on the program, YOSHIKI said, “I came here today because I thought I could give someone courage, but I was inspired to be courageous and hopeful myself.” He also talked about his memories of Budokan, where YOSHIKI once saw KISS live, an experience that changed his life and inspired him to become a professional drummer. YOSHIKI also expressed his worry about the airplane delay on his flight from the United States and laughed, “I’m so relieved I made it on time.”