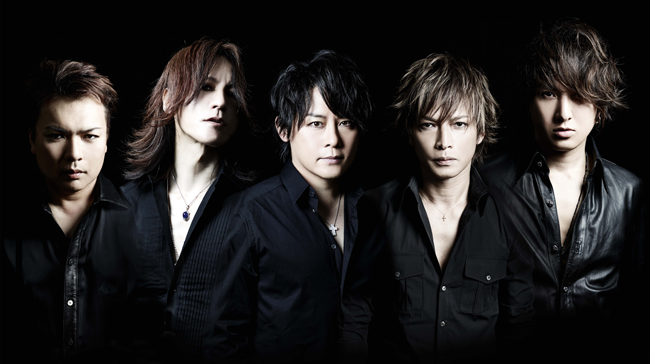 2017 marks the 25th major debut anniversary for the mega rock band, LUNA SEA. Celebrating its success for over a quarter of a century, the band held a concert on May 29th at Nippon Budokan. On this very day 28 years ago, LUNA SEA played their first concert at “The Play House” in Machida, Tokyo. The five young, talented and ambitious musicians at the time probably didn’t know that in 28 years, they’d be celebrating this day with a sold out crowd of approximately 14,000 fans at the venue hailed as the “holy land of VK” along with fans nationwide through a live broadcast on NEXT of Fuji TV.

For a band like LUNA SEA who easily sold out Tokyo Dome — with a capacity of 55,000 — in 5 minutes in 2007 when they revived after a 10 year hiatus, it means all of those who got the chance take part in their anniversary live at Budokan are real lucky. Excited fans of all ages clad in black gathered at Budokan on this partly cloudy day.  Inside, the stage was offset to one side, but seats were opened 360°. Making up to the audience looking at the back of the stage, walkways were extended not only to the sides but right up against the front of the first floor railings. Two medium sized screens dangled from the ceiling on either side of the stage, and what appeared to be an LED strip display screen hung in a circle above the stage. The drums was glowing in blue and green.

At 6:30pm, fans started cheering and clapping in sync at the scheduled starting time. At 6:50pm, cheering and claps thundered when lights went out as LUNA SEA’s familiar SE with elements from “Moonlight Sonata” played, and the members appeared on stage one by one. White and blue lights flashed as the band started with their first song, “Metamorphosis”. Even with SUGIZO (Gt, Violin)’s remarkable sound, INORAN (Gt)’s clean arpeggios,  J (Ba)’s thick bass tone, Shinya (Dr)’s powerful rhythm, RYUICHI (Vo)’s strong vocals cut through the mix for a balanced sound where they all each stood out while being in harmony.

RYUICHI could be seen wearing an all-black suit and sunglasses. SUGIZO, wearing a long black velvet jacket, often played at the front of the stage as close to the crowd as possible.

Only “Beginning part” was played for the song, so it quickly ended to lead into the second song, “PRECIOUS…”, which is one of the most frequently played songs from their first album released in 1991. RYUICHI drove the crowd as lights flashed during the intro. The entire crowd excitedly moved along to the straightforward beats of the song and sang along. Images flashed on the LED screen above the stage. During the instrumental section, RYUICHI went over to put his arms around SUGIZO’s shoulders a few times, who responded with a grin. The unity between the band and crowd was nothing short of impressive.

In the first MC, RYUICHI thanked all their fans, including the ones watching at home, even telling them to be careful not to break anything when rocking out at home.

After the short MC, RYUICHI drove the crowd a bit before announcing ” Déjàvu “! Shinya’s drums flashed neon blue and green lights in the intro as fans nodded their heads to one of their most significant songs as it was the first song they’ve filmed a music video for. SUGIZO stayed on stage left while J, who’s in a white shirt and a navy blazer drove the crowd. Shinya go on a rage on the drums for the outro, RYUICHI yelled “JESUS”! and Shinya went right back to work smashing the drums to open the way for the heavier number. SUGIZO’s solid but playful joined in, backed by J’s equally playful yet heavy bass line. Crimson lights and smoke dyed the whole venue in a red craze. SUGIZO’s guitar solo was had a clean and bright tone, fitting the lyrics perfectly. J then lead the crowd, singing with his lower and huskier voice.

Red and purple lights then flashed for their next song, “IMAGE”, the title song of their major debut album released in 1992. It has an upbeat melody that was in contrast with the lower vocal melody of this song. For this song, RYUICHI has switched his jacket for a shirt with a hood which he had put on to give off a mysterious aura that’s fitting for this song.

The song was followed by the second MC, where fans had a chuckled when RYUICHI said, “I don’t just want to increase in age, but I want to increase in the quality. When we’re 70, will we still be here? Will we be mellow or will we become more hardcore?”

Following the lighthearted MC, the band started the upbeat number “The End of the Dream” where SUGIZO, INORAN and J all drove the crowd by walking around the stage to either side as well as to the back. At one point, SUGIZO and INORAN both joined RYUICHI center front, with INORAN playfully tapping RYUICHI on the head at the end of the song.

Red and blue lights then flashed for the next song, “HURT”, an heavy medium-paced song where RYUICHI sings in an almost bewitching voice, backed by a solid rhythm and SUGIZO’s wailing guitar. RYUICHI waved his arm left and right, and fans followed, while rocking their heads to the strangely addictive rhythm. The song ended with a slightly eerie delay as the LED display lowered to surround the stage for the start of “NO PAIN”. Images of faces and flames flashed across the screen as SUGIZO’s guitars and RYUICHI’s vocals set up an emotional number that symbolizes their wish for peace. Following this, SUGIZO took his violin and RYUICHI also got onto an acoustic guitar for the band’s acoustic number, “I’ll Stay With You”. The violin melody was nothing short of being captivating as the crowd watched blue and yellow lights flashing across the LED screen.

The heat was turned up in the venue once again as Shinya started his drum solo. He took the opportunity to turn around to see the fans behind him before continuing his playful yet skillful solo. Fans chanted his name on cue as he beat away on his neon-lit drum kit. Then enters J’s bass solo with his charismatic and usual fat, beefy bass tone, which without a doubt, matched perfectly with his stage presence. He came out yelling, “Come on! Give me more!” multiple times to drive the crowd.  He also joked about not knowing where exactly he should look, as the stage was opened 360°. He also appeared to have changed his outfit, now wearing a sleeveless leather jacket with a polka dot shirt. In the middle of the drums x bass jamming session, J shouted, “Budokan, you guys are the best! Are you guys ready? Are you? Let’s go!” before getting the whole crowd to shout in unity.

After the solo, the other members reappeared on stage,  with a change of clothes, for “BLUE TRANSPARENCY”. The members showed their energetic side, running around the stage left, right, front and back. There were many moments where INORAN and SUGIZO played facing each other as fans cheered on.

*Second half will start from the main MC, the last 5 songs of the main set, and the encore.