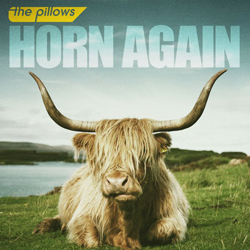 They can’t be stopped. There are three things in this life you can be certain of; taxes, death, and the pillows constantly making music. After 21 years together, alternative rockers the pillows still continue to make music with an output that rivals the most storied bands in the Eastern or Western world.Never in their 21 years as a band have the pillows gone on a lengthy hiatus. The band constantly tours and every year since 1990 has seen a new release by the band, be it a single or album. On January 26th, the band released their 17th studio album, Horn, Again, which opened at #6 on the Oricon Top 10 Album Daily Charts. You’d think after so many albums, songwriter and vocalist Sawao Yamanaka’s songwriting would begin to get a little stale. While in recent years there have been a few songs that seem repetitive, Horn, Again blows everything from the last three or so years out of the water.

Yamanaka has come up with some truly inspired tracks on this album, and a good number of them evoking that classic “pillows sound” from the golden years of the late 90’s. The quirky guitars are overlaid with cheerful melodies that can brighten your day no matter what kind of mood you’re in.

The album starts off with Limp Tomorrow, an excellent and bold choice for an opener with an extended intro. It’s reminiscent of the opening track on 2006’s My Foot album; both are very powerful songs and set a tone for the rest of the album that the band isn’t messing around. Give Me Up! follows next, and is quite frankly the perfect, short pop song. Yamanaka seems to have this down to a science. In only about two and a half minutes, this song packs it all in. You have some dueling, chugging guitars going on during the verses, a catchy, hook-laden chorus you can’t help but sing along too, and even a shred-tastic solo from lead guitarist Yoshiaki Manabe.

It very well could’ve been the album’s single, but that honor was reserved for the song Movement, and with good reason. The verses are in a word, godly. The tones of the guitars hearken back to an earlier time in the band’s career, with Yamanaka’s voice sweetly crooning and Manabe adding some nice guitar licks in the background. The chorus just emanates a sort of warmness that will wrap you up completely as you hum the melody quietly to yourself. Emerald City also does a good job of evoking that classic vibe, sounding like it could have easily fit on something like Happy Bivouac.

However, as much as the band is able to feed off of nostalgic vibes, they also venture into new territory on some songs, namely Nobody Knows What Blooms. This song is definitely a highlight of the album. Right away, drummer Shinichiro Sato’s drumbeat will catch you off guard, but not in a distasteful way at all. The surging bass grabs your attention next, mixing with the smooth interplay between Manabe’s and Yamanaka’s guitars. Saxophones and horns are added throughout the song, but never does it feel forced. The pillows tried something kind of similar on their previous album, OOPARTS, but here the added instrumentation works and flows with the song. The chorus sounds absolutely beautiful with Yamanaka belting out, “We start to see, nobody knows what blooms”, which seems to be indicative of the pillows themselves. You never know what to expect when listening to their wide discography.

There really isn’t all that much to complain about on this album. There are a couple of English (or Engrish, if you will) songs, which both feature their fair share of horribly translated lyrics and pronunciation. Even through that, the song Sad Fad Love paints a pretty clear and relatable story of a guy who longs for a girl that’s already taken, but in typical fashion for the pillows, the music remains upbeat despite the despondent lyrics.

It becomes apparent by the end of the album that this release is certainly the band’s best in recent memory. Every song has an amazing solo by Manabe, bassist Jun Suzuki’s parts seem to get more and more interesting with each passing song, and the album is perfectly mixed. I cannot stress that enough, and it’s something I can rarely say. The pillows have a knack for mixing all the elements of a song together in a way that one instrument isn’t drowning out another, or the vocals aren’t bleeding through where they shouldn’t. The best part about it is that the bass is always prominent; it’s not hidden deep in the mix, as you’ll hear on other popular artist’s records. So if you haven’t checked out the pillows since FLCL was on the air, now would be an excellent time to dive back in. Horn, Again proves the pillows are still masters at weaving together stellar melodies with quirky songwriting.