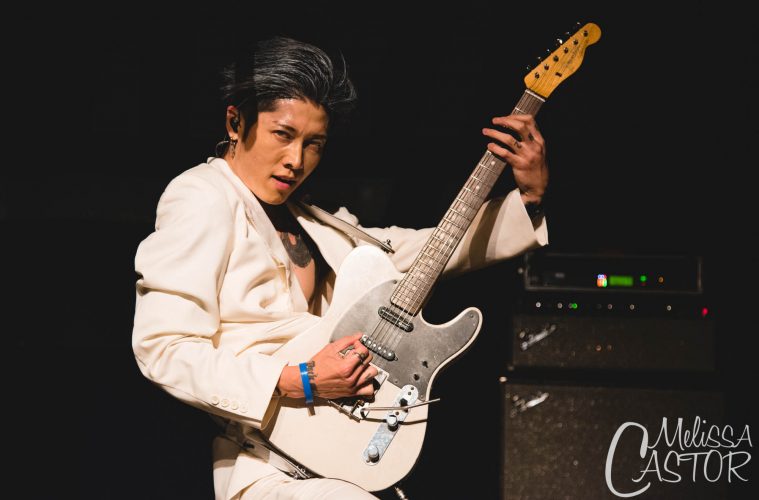 It may have been a Monday, but the crowd showed up for Miyavi’s #NoSleepTillTokyo Tour in New York City like it was a Friday night and gave just as much energy! Just last year Miyavi played Irving Plaza in NYC, but fans were eager to see the samurai guitarist in a new venue in Times Square called Sony Hall.

And as always, Miyavi did not disappoint. As the lights dimmed and the background music started, fans screamed in anticipation. Drummer Bobo and DJ Jonny both walked out behind their respective instruments as Miyavi slowly walked on stage, guitar slung around his shoulders, dressed in a classy white suit with no shirt underneath, showing off his many tattoos.

The set started off with ‘Stars’, the title track on Miyavi’s latest album, “No Sleep Till Tokyo.” This album & tour, Miyavi mentioned how he’s going back to basics with just himself on guitar/vocals, drummer Bobo, and DJ Jonny. Miyavi had a headphone microphone on so he was able to play guitar and move around the stage with ease while continuing to sing.

The album title track ‘No Sleep Till Tokyo’ had the crowd shouting the lyrics back to Miyavi as he sang, the lyrics very catchy and easy to sing along to. The song mixes English and Japanese, but that didn’t seem to bother anyone in the least as they waved their arms in time to the beat.

“I cannot protect people with the guitar or music,” Miyavi said, “but music can change people and people will change the world.” He then began playing ‘Tears on Fire’ – another song off his latest album.

New York City was taken to the ‘Other Side’, following ‘Tears On Fire’ on both the album and the nights setlist. Miyavi passionately played his guitar, putting his all into this song, falling to his knees at the front of the stage as he continued to play before reaching his arms out to the audience as he sang the lyrics, “So I close my eyes // Going off the edge // To the other side.”

The audience shouted Japanese phrases such as “daisuke” (I like you) and “aishiteru” (I love you) and Miyavi smiled, asking, “You guys understand Japanese?” before giving a brief MC in Japanese, thanking everyone for coming out.

“Thank you so much for coming tonight, are you having fun!?” The crowd roared their excitement. “We are so happy to be back in New York City.”

The theme of this tour, he said, was visiting all different cities, including ones they hadn’t visited before such as Tucson, AZ. Miyavi said Bobo didn’t know how to pronounce the city “Tucson” and the crowd laughed and smiled. “Tucson, San Antonio …and other cities.” Miyavi spoke of when playing New York City, he has always played at Irving Plaza (2010, 2011, 2017, 2018) but this year we were at a new venue – Sony Hall!  He spoke of his love of living in America with his wife and two kids, how America has taught him so much and is still teaching him new things.

“Even though we’re far apart, we can be united through music”, Miyavi said, “This is the track I wrote right after the earthquake happened in Japan (in 2011), it was such a tragedy, but we had lots of support from you guys – thank you so much. I wrote this track for everyone who is fighting and working so hard – far away from your family, friends, and people you treasure in your life. This is the way we love. This is the way we protect.”

‘Guard You’ was a pleasant surprise and a soft moment amidst all the movement and energy. This song, from his 2013 self titled album, had the audience swaying back and forth as they watched Miyavi work his magic.

This is an old Japanese song, Miyavi announced, “If you know the lyrics please sing along,” before going into ‘What A Wonderful World.’ Grabbing his microphone off the mic stand, he sang the Japanese lyrics as the audience sang back to him. Waving his arms back and forth, the audience following suit. This is a classic Miyavi song and always loved by the crowd.

‘Under The Same Sky’ is another new song that is a theme for Co-Miyavi – fans of Miyavi – we are all under the same sky, no matter how far apart and Miyavi’s music brings people together.

After this song was over, someone in the crowd shouted to Miyavi, “You’re the sauce!” which had the crowd laughing, but Miyavi confused by the meaning; “S-A-U-C-E?” – looking to Jonny to explain.

“Do you still want to rock?” Aside from the multitude of songs played from the latest album, Miyavi played a fair amount of songs not from that album as well including Strong from 2012, and Fire Bird from his previous album in 2016, both crowd pleasers.

The night was over too quickly as Miyavi waved adieu and exited the stage – to abrupt shouts of “MI-YA-VI!” asking him to come back!

He didn’t make the crowd wait long as he emerged back, changed from his white suit into a tour t-shirt. “Thank you for calling my name!”

The band was then introduced; first drummer Bobo, to much cheering from the crowd. Followed by DJ Jonny, to more applause. Miyavi spoke of how, with DJ Jonny, they’ve been able to experiment with new stuff. “As a guitarist, that’s one of my missions, to bring back the excitement of rock and guitar music.” Miyavi wants to play classic rock music but also make it new for this generation. Miyavi thanked Jonny for his creativity.

Before playing ‘Long Nights,’ Miyavi spoke of the work he had done as an ambassador with refugee camps in Lebanon, how it was eye opening and how the refugee crisis is only increasing. “I know this is not a simple issue, to accept those people you don’t know. But I think there is a way we can find a solution … As long as there is hope, you can step forward. As long as you know tomorrow will come, we can get through the long nights.”

And what’s a Miyavi show without him asking the crowd, “What’s My Name?” The final song of the night kept the energy going until the very end! Miyavi fed off the audiences energy the entire night and everyone gave it their all for this last song. Towards the end of the song, Miyavi jumped up on the ledge at the side of the stage – a standard for Miyavi to do during this song. Standing high, stance wide as he rocked out on the guitar, head shaking and hair flying all over, he was in his element.

Before departing, the band took a group photo with the audience and then bowed out after a show well done! Bobo and Jonny walked off stage, but Miyavi moved forward once again to high five any outstretched hands he could reach. He even leaned forward onto the barrier to reach those further back, slapping hands as he went and thanked everyone, ‘No Sleep Till Tokyo’ playing over the speakers with Miyavi mouthing the words and the crowd shouting back the lyrics. He thanked the crowded wordlessly once more before departing as well.

Miyavi’s performances never disappoint, and while the North American #NoSleepTillTokyo tour is now over, he will tour Europe in the fall! Check it out if he’s coming to a city hear you! We all hope he’ll tour across North America again next year. If you’ve never had the chance to see him, I would highly recommend a Miyavi show!

Until next time – No Sleep Till Brooklyn – or, in this case – Tokyo.

Setlist:
Stars
Flashback
In Crowd
Rain Dance
MC
No Sleep Till Tokyo
Samurai 45
Tears On Fire
Other Side
MC
Guard You
Wonderful World
Under The Same Sky
Ha!
Strong
Fire Bird
Raise Me Up
Day 1
Encore:
Fragile
Long Nights
The Others
What’s My Name