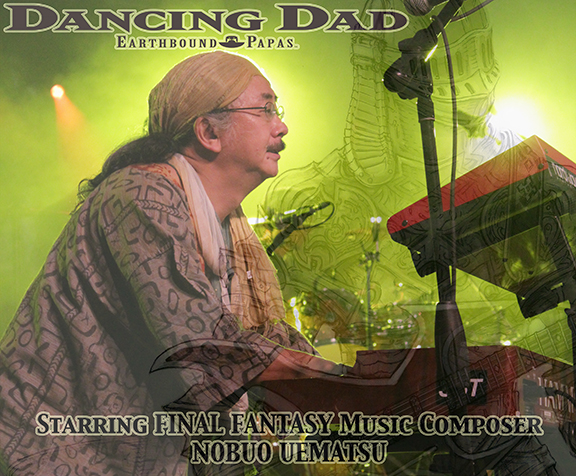 In his career path as a game composer, his achievement has gone beyond just in the games.  The theme song from Final Fantasy VIII, “Eyes On Me” written and produced by Uematsu for Hong Kong pop star Faye Wong, sold over 400,000 copies worldwide, and its record breaking sales eventually lead the song to win the “Song of the Year (Western Music)” award at the 14th Annual Japan Gold Disc Awards in 1999.  To this date, “Eyes on Me” still remains the only song from a video game to win the award, and it also remains as the best selling song from a video game in the world.

In 2006, he collaborated with a Japanese pop singer-songwriter, Angela Aki, and wrote, “Kiss me Goodbye”, the theme song of Final Fantasy XII.  The song became a smash hit and charted number six on the Oricon charts.  He also collaborated with the legendary rock singer Ian Gillan (Deep Purple) on Blue Dragon and a two time Grammy winning artist, Sheena Easton, on Lost Odyssey.

Uematsu has been named as an “innovator” in Time Magazine’s “Time 100: The Next Wave – Music” and chosen for Newsweek magazine “100 Japanese whom world respect”.

Most recently, Uematsu released an album, Octave Theory, with his newly formed rock band, “EARTHBOUND PAPAS”.  The band is actively performing in Japan and U.S. bringing an incredible musical experience with his music to fans all over the world.

In October 10, 2010 the group made their live debut on the main stage at the “Jiyugaoka Megami Festival”.

The following year in March 16, 2011, they released their first album “Octave Theory”.

The group was the headliner at the “First Annual Fantasy Rock Festival” held in September 2011 and in October of the same year performed at the “4STAR ORCHESTRA” the Game Music Festival held once every 4 years.

Not limiting themselves solely to the domestic market, the group has also performed at international conventions such as “Oni-Con (held in Texas in October)” and appeared as the main act at the Washington D.C. “MAGFes 2012” performing a hot live in front of a several thousand member audience.

In 2012, with the band’s plan including providing music for games, appearing for the 2nd year running at the “Second Annual Fantasy Rock Festival” and “Oni-Con 2012”, and also a confirmed appearance at a convention in Hawaii, the group is gathering strong interest both domestically and internationally.

Instructed in Guitar by Masanori Kitagaki at the Musashino Music Academy, he began his musical career by passing the SD Division Audition for the then Sony Music (Ltd.) while enrolled in college.

He has participated in the production of game music for titles such as “Hanjuku Hero 3D” and “Anata wo Yurusanai (I won’t forgive you)”.

He participated in Nobuo Uematsu’s bands “THE BLACK MAGES” and “EARTHBOUND PAPAS” as Guitarist/Arranger, co-starred with orchestras and made international public performances.

Born September 1 and hailing from Kyoto City, he is the Bassist for EARTHBOUND PAPAS.

He is also a Composer/Arranger able to fuse the sounds of Electronic and Ethnic Instruments and freely connect East and the West, Old and New Eras.

Involved in the creation of sound effects for games such as “Final Fantasy VI, VII, VIII” and “Parasite Eve”, he has used the knowledge gained to create his own personal musical style.

He has composed a multitude of  original soundtracks for games such as the “Shadow Hearts” series, “Glory of Heracles: Proof of Spirit”, “Ar Tonelico 3” and “Half Minute Hero”.

He experienced Piano in childhood and wind instrumental music, chorus and rock bands in later years.  He taught himself composing at 16.  Today, he freelances working on composing and arranging Orchestral, wind, chamber, and image music.

In his last creation “Unchain Blade REXX”, he was in charge of composing and arranging the BGM.

He is the keyboardist/side guitarist for the EARTHBOUND PAPAS.

Vocalist, Lyricist, Composer, performed with Tomori Kudo as “ACE”.  Debuted with Universal Music in 2009 and released “Good Mistakes” in 2011.

In addition to undertaking lyrics, composition and singing the title songs for such game titles as “Xenoblade”, “Code of Princess”, “Emil Chronicle Online” and “Baku Bomberman 2”,  she has participated in such broad areas as composing image songs and ballads and providing support for the Eiichiro Oda supervised “ONE PIECE exhibit: Companion Theater”.

She has also performed all vocals and arrangements for “10 Short Stories of Nobuo Uematsu”.

She enrolled in ESP Musical Academy vocation school and majored in Vocal studies.

While in school, she won an award at a Vocalist Contest held once a year.  After graduating she performed with various bands and is currently the vocalist for EARTHBOUND PAPAS.

In 1996 he made his major debut with Rock Band SHY BLUE.

He is also currently active as a guest vocal with Progressive Hard Rock Band ALHAMBLA.

While living in New York between the ages of 10 and 14, he received formal voice training and learned  genuine voice technique.

He began his musical career at 15.  In 1999 he organized a large Soul/Funk band named SpitFunk and released 3 albums.

Recently he has been active in various musical productions as a vocalist, lyricist, and music producer.

He has provided several lyrics for the development simulation game “THE IDOLM@STER” series and Korean Pop Star KIM KYUNG HO.

Also as joint producer for a Heavy Metal band representative of Japan, SABER TIGER, he is in charge of their current vocal production and all lyrics.

As the drummer of  “Mr.SIRIUS”, the progressive rock band representing Japan, has been an active member from the start.  After entering XTALSOFT in 1983, working as a game producer and put in charge of sound, shows his diverse talent.

Transferring into Square Soft in 1990, working as the director of “Sega 3”, “Mystic Quest”, “Super Mario RPG, composition/arrangement for “Sega 3” and for “FINAL FANTASY X” as a part of “Otherworld” as the drummer.

October of 2012, joining Nobuo Uematsu’s band “EARTHBOUNDPAPAS” as the drummer up to the present date.