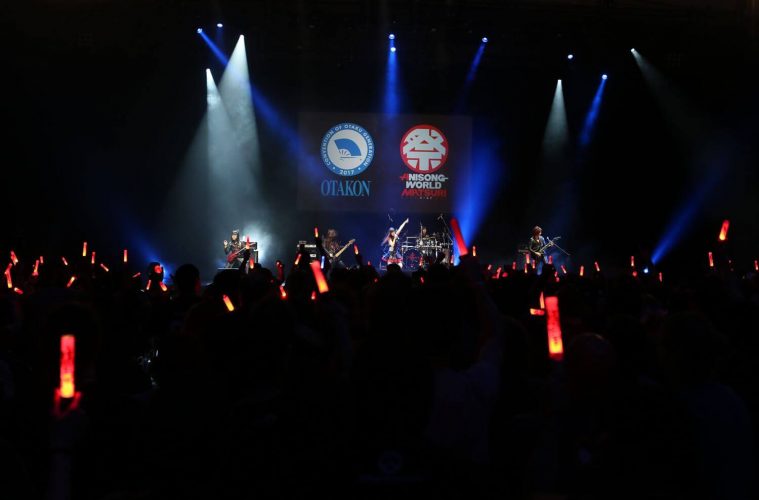 A Look Back at Otakon and Anisong World Matsuri

Otakon is probably one of the largest anime conventions on the east coast of the United States.  For years they have brought big-name musical acts state-side giving fans, many of which the only chance to see these artists perform.  This year Otakon move from their home at the Baltimore Convention Center to the much larger Washington DC convention center, located in the heart of the nation’s capital.  And with the big move, a grand musical event during the convention weekend was also in tow.

This year Otakon teamed up with Anisong World Matsuri, a concert series produced by some of Japan’s top entertainment companies with the objective to spread Japanese music at the highest quality.  Two concerts were held throughout the convention weekend, each with their own spectacular line-up providing a good variety of different musical styles to match the variety of fans in attendance.  Unlike normal convention concerts, Anisong World Matsuri is its own entity and required the purchase of an additional ticket in conjunction with a convention badge to gain entry.  A pricey sum, especially if you were planning on attending both concerts, in which case you would need one ticket for each day.  Although the hefty price tag may be a deterrent, the concert and opportunity to interact with the artists on a more intimate level (ie. Q&A and autograph sessions) is totally worth it for Japanese music fans.

Throughout the convention day, musical guests would take part in special Question and Answer sessions as well as autograph sessions where fans can get memorabilia signed while chatting with the artists.  During the Q&A sessions, artists answer questions asked by the fans.  This allows fans and the artists to closely interact with each other, something that cannot be done in a regular concert setting.  All facets of the artist’s personalities shine through in these moments allowing for exciting, sentimental, and hilarious moments.  One memorable moment was during FLOW’s Q&A when a fan asked the band what their favorite joke was.  The monitor of the session reminded them to keep it PG-13 to which guitarist TAKE totally disregarded by repeating slightly dirty words garnering hysterical laughs from everyone.  During T.M.Revolution’s Q&A, he spoke about past and future projects giving everyone some incite to what may be coming down the pipeline for the veteran singer.

As the sun went down on the first day, the evening concert was to begin.  The line-up for this year included many popular acts, all of them tying back to anime; Otakon is an anime convention after all.  For the first day JAM Project, a group made up of accomplished vocalists that specialize in making anime songs started off the night.  The group did a great job getting the crowd excitedly jumping, singing, and waving lightsticks as they performed a bunch of popular songs.  Up next was T.M.Revolution.

T.M.Revolution exploded onto the stage and delivered a high energy performance that not only included popular anime tracks, but also some of his popular singles from earlier on in his career.  As a special closing to the night, JAM Project and T.M.Revolution did a probably once in a lifetime collaborative performance of JAM Project’s “SKULL.”

On the second day the concert was held in the afternoon.  First up was Yousei Teikoku and their regal vocalist, Empress Yui.  After she strutted onto the stage ethereal notes mixed with heavy metal blared from the speakers creating an almost cult like experience as the audience chanted out at her every command.  Ever-popular band FLOW took the stage next.  With the plethora of anime songs under their belt, the audience seemed excited for every song that they played.  The band had the audience to the wave to keep everyone’s energy up and there were several special performances.  The first was for “Cha-La-Head-Ch-La” where JAM Project vocalist Hironobu Kagayama, who originally sang the song, joined FLOW, who sang a remake of the song, and sang together on stage.  Another moment was when Yousei Teikoku joined FLOW on stage to perform “COLORS,” the last song of the night.

The musical guests for Otakon 2017 were spectacular and had great appeal to every J-music fan across the board.  Conventions always allow fan to interact with artists in a unique way which is why so many J-music fans travel and attend conventions they normally wouldn’t.  And although there was a slight drop in attendance from previous years, the total number still registered above 24,000 attendees and will surely grow as Otakon claims a better foothold at their new location.  Otakon 18 has been announced for August 10-12 2018 so everyone can look forward to what new and exciting musical guests they have in store for next year’s convention.