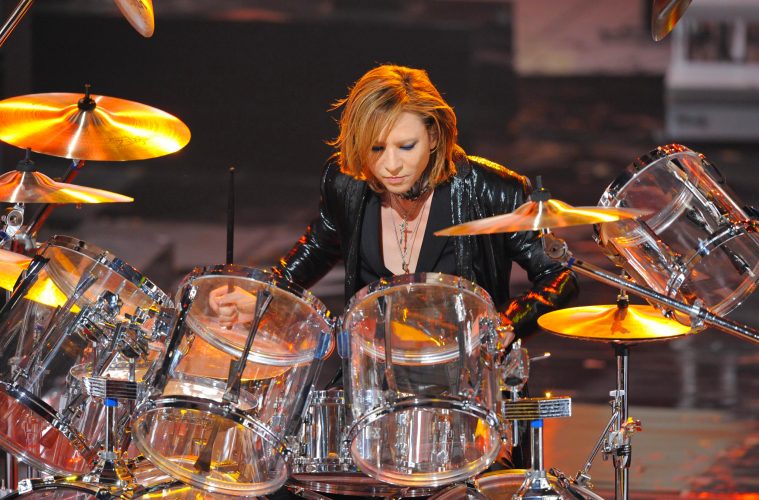 Yoshiki, leader of X Japan, made his return to the drums during a live television broadcast on New Year’s Eve, shocking the audience of the popular Japanese television program Kouhaku Uta Gassen with a rocking drum performance just over six months after his neck surgery last May.

X Japan’s appearance at the 68th annual Kouhaku, the holiday music showcase which gathers all of Japan’s top performers, began with an elegant rendition of “Endless Rain” – with Yoshiki on piano and Toshl on vocals – before the performance suddenly transformed into X Japan’s legendary rock song “Kurenai”.

As Yoshiki descended the stairs from the piano, his drum set appeared on the stage before him and the entire auditorium ignited with cheers. During the broadcast, social media was flooded with comments as all of Japan and music fans around the world shared the excitement. Performers and staff alike began applauding backstage, and many media outlets quickly reported the news.

With only half a year having passed since his surgery, Yoshiki was still not completely used to his artificial intervertebral disc. However, after his doctor told him that “performing on drums shouldn’t be a problem if it’s just one song,” he decided to make his drumming return on New Year’s Eve. While it couldn’t be said that his drumming was back to perfection yet, Yoshiki was determined to do his best in his current condition, practicing all night the day before in preparation for the special occasion on the renowned Kohaku Uta Gassen stage.

2017 had been a dramatic year for X Japan and Yoshiki, with his solo performances at New York’s Carnegie Hall followed immediately by X Japan’s Wembley Arena concert in London. X Japan’s tumultuous history was documented in the award-winning film We Are X, which opened in countries across the globe.

Yoshiki said, “I’m very proud to have been able to perform on drums on the stage of Kouhaku Uta Gassen. We will continue to push ahead toward new things next year as well, and I hope all of you will look forward to what X Japan has in store.”