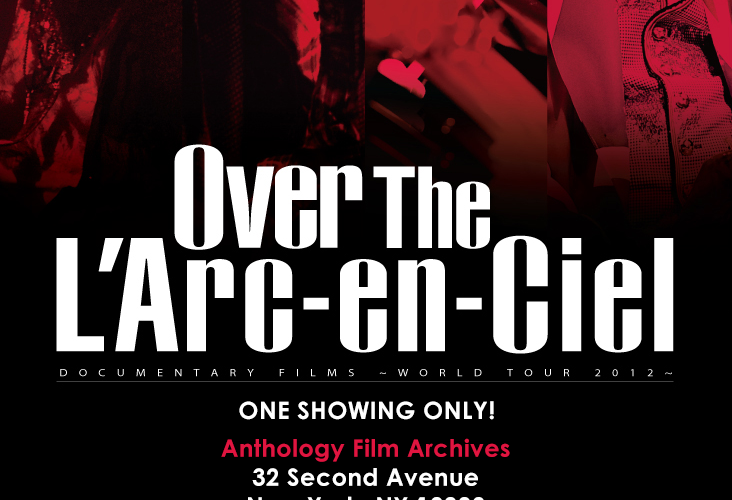 Over The L’Arc~en~Ciel Documentary screening in NYC 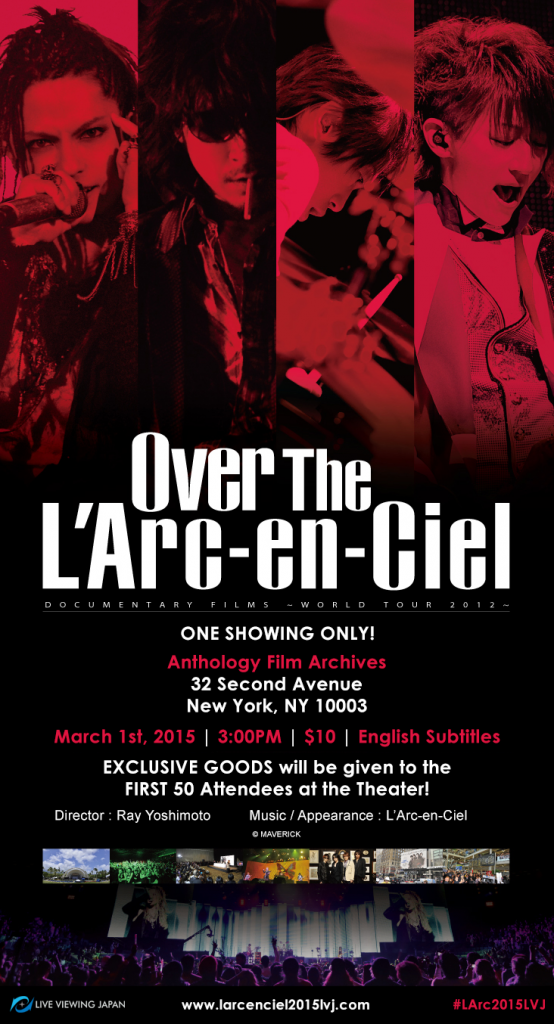 Ticket Price: $10.00
More Ticket information will be available at: www.larcenciel2015lvj.com

This film documents a legendary rock band who never fear to take challenges on the international stage, when they have already reigned over the domestic music scene. L’Arc-en-Ciel, after celebrating their 20th anniversary, embarked on a massive world tour that no other Japanese rock band had ever done before. From March 3rd to May 31st, 2012, L’Arc-en-Ciel’s 14-city world tour hit Hong Kong, Bangkok, Shanghai, Taipei, New York, London, Paris, Singapore, Jakarta, Seoul, Yokohama, Osaka, Tokyo, and Honolulu with a total attendance of 450,000 people. The band became the first solo Japanese act ever to perform at Madison Square Garden.

Japanese American director Ray Yoshimoto captured the global “phenomenon of L’Arc-en-Ciel” with a fresh, unbiased viewpoint, which would captivate both hardcore fans and newcomers alike. The film shows rare backstage scene and candid footage of the band, showing the members’ true and gentle emotions in a mixture of smile, confusion, excitement, as well as tension. Revealed in this film are not only raw personal charms of each member, but also the essence of true professionalism deep inside these respectable musicians. Make sure to witness the birth of a masterpiece in the history of world music, “Over The L’Arc-en-Ciel”.

Comprised of hyde (Vocal), ken (Guitar), tetsuya (Bass), and yukihiro (Drums), L’Arc-en-Ciel achieved blockbuster commercial success with many number one singles and albums on the Oricon charts after their major debut in 1994. The band features a wide range of sounds from hard-rock tunes to romantic ballads, including notable theme songs for popular animes and video games such as Fullmetal Alchemist and Devil May Cry 4. To date, L’Arc-en-Ciel sold over 15 million albums, 16 million singles, and millions of merchandise, including DVDs.

Finding success at home, L’Arc-en-Ciel continued to expand their profile through launching activities overseas. On July 31st, 2004, L’Arc-en-Ciel made their North American debut at the largest anime convention in the east coast, Otakon, as the first Japanese band to perform at the 1st Mariner Arena, which attracted an audience of 12,000 people. Sequentially hitting Asia and Europe from 2005 to 2008, the band gained increasing international fame and solidified their loyal fan base everywhere they went.

The band embarked on a stunning world tour, which covered 10 countries throughout Asia, Europe, and North America, one year after they celebrated their 20th anniversary in 2011. Their New York show took place at Madison Square Garden on March 25th, 2012, making L’Arc-en-Ciel the first Japanese artist ever to be the lead act at the legendary venue. Acclaimed for having “made a great contribution to cultural activities, and built a bridge of friendship between Hawaii and Japan” by the mayor of Honolulu, Peter Carlisle, the band has conquered the Japanese rock scene at a furious pace with their captivating music and dramatic live performances, while setting their sights worldwide to keep up with the frenzied response in Asia, Europe, and the United States.

About Live Viewing Japan:
Live Viewing Japan is a famous Japanese-based media distribution company dedicated to introducing Japanese artists of various genres around the world. More information on the company and its projects is available at: www.liveviewing.jp