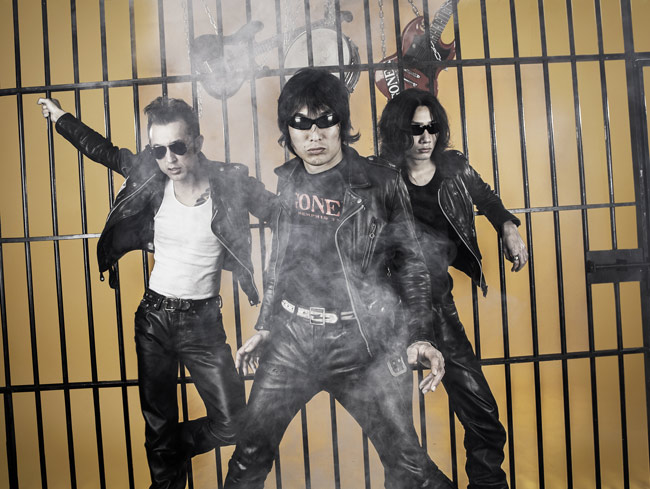 On October 6th, we sat down with Guitar Wolf’s Seiji in Denver, Colorado for an interview. With a band with more than 20 years under its belt, enigmatic stage presence, the Guitar Wolf himself greeted us with the same energy he puts out on stage.

So could we start with an introduction telling us a little bit about you and your band.

We’ve seen punk and rock as some of your earlier influences, do you have anyone in particular that you drew influence from in the beginning?

So you just wanted a really cool band.

I think you did very well!

Seiji: Link Wray, from the 50’s, came out with a famous song Rumble, and Jack the Ripper. So because I sometimes gave up the guitar from junior high school…I always had many chances to play guitar from junior high school, but I always gave up guitar. Because I couldn’t do ‘F’ sounds. But one day, I bought, just cool records, and that record was Link Wray. I layed down the record on my turntable, and the first song was ‘Rumble’. [mimics guitar sound] “Wow!” It was really easy, maybe kindergarten, elementary school boys could play this song. So, [I thought] “This is guitar!” Link Wray saved me, so I didn’t give up guitar.

So that kind of changed how you played.

Looking over your discography, there are very interesting names for your albums and songs. They’re really provocative. What were the inspirations behind those kind of titles?

So it kind of just comes to you.

You have been touring the U.S. for a while, where else have you been able to tour?

Seiji: We had our first American tour in 1993. I came here for just one show, it was north of Seattle. So we played there just once. But, some people called me, “Hey, please come. Hey man, come to my hometown. Please play.” So, of course I went. Then, we had six shows in six cities. So when I played in Memphis, after the show I gave our cassette tape to one guy, his name is Erik. Anyways, I gave him my cassette tape, and after that I went back to Japan, back to Tokyo. Then three months later, a record was sent to me. So the cassette tape became a record. That first record became our first album.

Have you had your other albums in the U.S. or are they all imported?

Besides touring with other bands, have you been able to do collaborations with other artists?

Seiji: We have our movie, Wild Zero.

I have heard of it.

Seiji: Please watch it, you will understand who saves this earth. But now, sometimes director Togumi says, “Yeah, let’s have a Wild Zero 2.” but he can not look for a promoter or producer. But if he can find a promoter…maybe he will shoot Wild Zero 2.

In the last decade or so, there are more and more bands that are touring outside of Japan and looking for overseas prospects, how do you feel about other bands making that jump?

Seiji: I think it is very good. 20 years ago, Japanese bands seldom played here. Now, many Japanese bands can come here. Now everything has become small by computers, so we should have the music scene together all over the world. This is very good. American bands, as well as European, Australian, and New Zealand bands come to Japan too. So now maybe Rock N’ Roll is more cool. I hope. [laugh]

Going back to the world being smaller because of things like the internet; I saw you guys are on facebook and twitter, are you able to really interact a lot with the fans through those outlets?

Seiji: I don’t really do facebook, but…well…what do you think? [laugh]

I think some bands embrace it, some don’t; they just kind of have them to have them. I think it just differs from band to band.

Seiji: Ah..hm…well..I don’t really use facebook, it’s a little difficult to use, but I think it’s not so bad, it may be good. Maybe.

You have merchandise that is in Japan, but you also have a jacket that was made here in the U.S.; do you still sell that jacket, or have you added to that merchandise?

Seiji: Yes, I have storage in Memphis, Tennessee. Memphis is our home town because of our first record [that was made] in Memphis. Before that, I was sending our demo tape to all over the world, but nobody recognized me, except Memphis. Memphis recognized US. We have many friends there too.

So, you guys have been around for a while now. Looking at where you are right now, is there something you would tell your younger self 20 years ago?

Do you have any particular favorite memory on tour?

Seiji: When we played Argentina, it was in a very old building and architecture. Maybe a bit old school, an old church. We seldom go to Argentina, because Argentina’s money is very low, so they can not pay for tickets. So, Argentina people everywhere were hungry for Rock N’ Roll. So when we played Argentina, I was waiting backstage. Backstage was at the side of the stage. So while we were waiting for the show, smoke came into our room. So we thought ‘maybe some staff used the smoke machine. That’s great!’ But no, no. The ceiling was [makes an exploding noise and motions downward to suggest the ceiling falling down] full of smoke. Nobody was hurt, but I thought, maybe the show would be stopped. But it only made everyone more excited.

Seiji: [laughs]..it is a good memory.

With Wolf being a part of your name, what part of this embodies you as a band?

Are there any words you would like to add?

Seiji: 20 years ago, I said this during an interview. My grandmother is wolf, so I am quarter wolf, she is living in Mt. Fuji, so I have to  see her sometimes on holidays.

Interview by: Ali W. and Jess