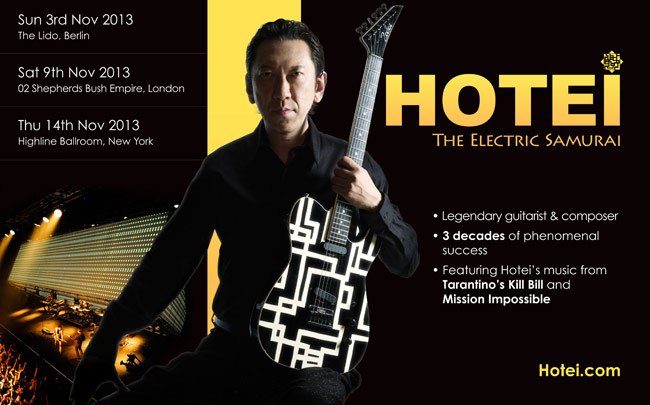 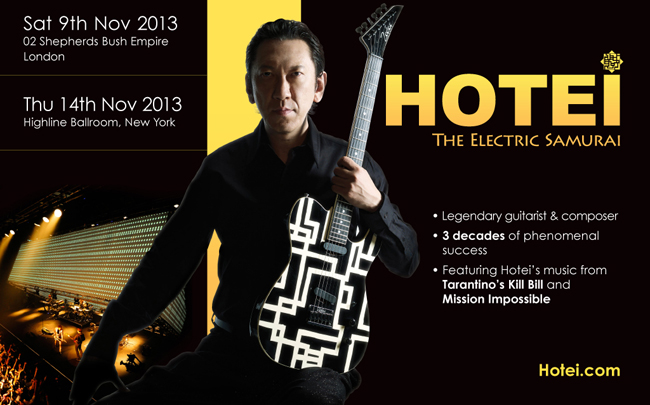 Tickets are on sale now for both shows at

Update: The November 3 show for Berlin has been canceled. The other two shows are still confirmed to go on as scheduled. Please take note!

For this tour, Hotei will bring together a band of amazing musicians from around the globe. 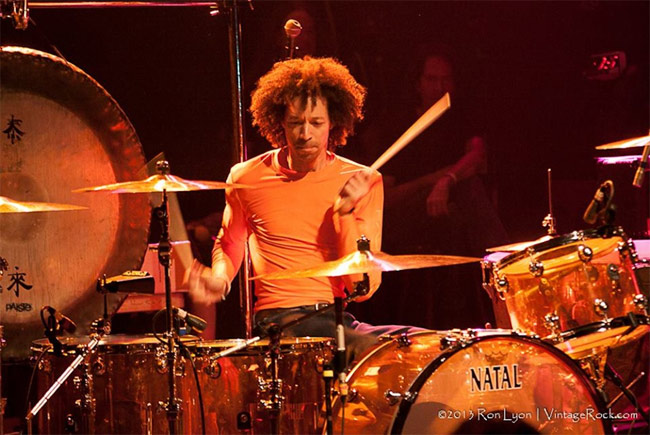 One of the world’s hottest and most in-demand drummers, Zachary will be joining Hotei for the full November tour. Zachary has been recording and performing with David Bowie since the 90s, and was recently featured on the new David Bowie album The Next Day, also appearing in Bowie’s music video for the title song. Born and raised in New York City, Zachary began playing both drums and piano at age 11, and took advantage of Manhattan’s many opportunities to play and perform with different groups in various styles of music including dance, rock, jazz, funk and avant garde. Clubs like the now famous CBGB’s, Danceteria, The Peppermint Lounge and The Ritz were his training ground for a career in music. After attending The Berklee College of Music he returned to New York and began almost immediately to tour Europe with musicians he knew from his days on the New York music scene. Throughout his career Zachary has enjoyed collaboration through recording and performance with a wide range of artists including George Clinton, Bruce Springstreen, Gwen Stefani, Billy Joel, The Manic Street Preachers, Kelly Clarkson, The Songdogs, The B-52s, North African musicians such as Khaled, Faudel, and Rachid Taha, Suzanne Vega, Tomoyasu Hotei, Yonekura, Susanna Hoffs, and many others. 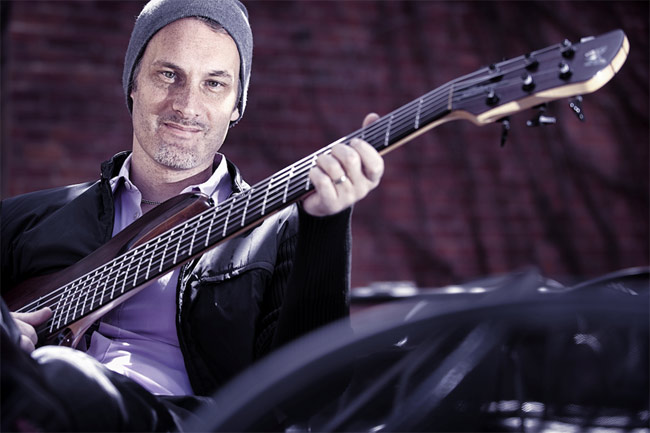 A world-class bassist, Tony is now based in New York, and has just released his latest solo album Elevation. Born in Newcastle, England, Tony was raised in a family of musicians. Taking up the bass at age 18,  Tony received a scholarship to the prestigious Berklee College of Music in Boston, MA. While at Berklee, he had his first taste of success as a member of the pop band Bliss, touring extensively and appearing on MTV. Tony was given the esteemed Outstanding Performer Award while at school. Upon graduation, he taught clinics and master classes at Berklee, and also spent 7 years working with one of the world’s most gifted pianists, Hiromi, as a member of her Trio Project. Bringing together his love of music and commitment to artistic growth and education, Tony has launched one of his most important career projcts, the online Tony Grey Bass Academy, aiming to foster the next line of standout bassists. Tony has worked with some of the greatest musicians around the globe, including the likes of Herbie Hancock, Wayne Shorter, Hiromi, John McLaughlin, Branford Marsalis, Zakir Hussain, Mike Stern, Gary Husband, Simon Philips, Indian electronica player/drummer Karsh Kale, Tomoyasu Hotei, Wayne Krantz, Steve Lukather, Reb Beach, David Fiuczynski, Mino Cinelu, David Throckmorton, and others. 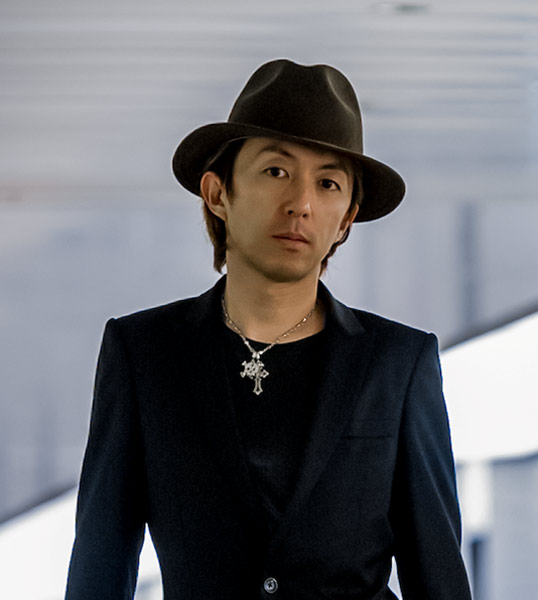 Toshiyuki Kishi is a highly acclaimed artist in the Japanese music scene, known and respected for his work as a keyboardist, programmer, arranger, and producer.  Based in Tokyo, he currently plays as a member of several bands: abingdon boys school, JUNK FUNK PUNK, TWO TRIBES, and PGP. As a child, Kishi began playing trumpet, trombone, and guitar, and in high school started playing with both hard rock and techno bands. Moving into the world of recording and overdubbing techno, he continued to develop his instrumental skills, and attended the prestigious Yamaha Academy of Music. Kishi’s musical career took off in the early 90s with both recording and live performances with renowned artists such as Ryuichi Sakamoto, YMO, Tomoyasu Hotei, and Original Love. As a producer and arranger, his work also expanded through collaboration with TM Revolution, The Alfee, Gospellers, Nokko, and SMAP. Kishi also worked under the name “tko” as a remixer for Yukihiro Takahashi, Tomoyasu Hotei, and Aikawa Nanase, and he was involved in the film soundtracks for Junji Sakamoto’s films Shin Jingi Naki Tatakai and KT. He worked as the music director for Hiroyuki Nakano’s film Red Shadow, and collaborated with Tomoyasu Hotei on the track “Battle Without Honor or Humanity,” which was later used as the theme song for Tarantino’s film Kill Bill. As a solo artist, Kishi’s works include the film music cover collection “Cine Techno” with album cover “My Fuck’In Valentine,” the analog synthesizer cd-rom “Render Organ,” the J League soccer official theme song “The Glory,” and the opening theme of TV Tokyo’s “Dawn of Gaia” and “Beat.” 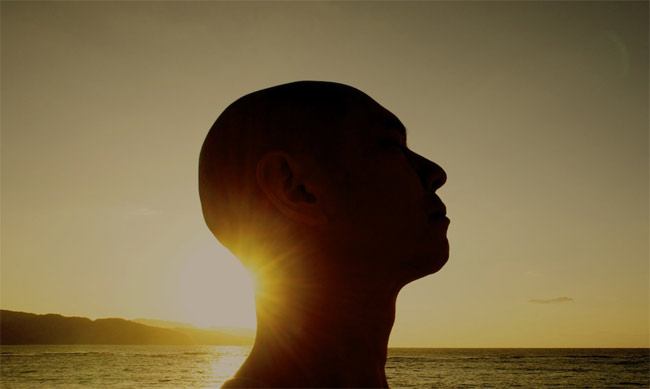 Born in LA to musician parents, Steve was raised in a context of Japan’s most sophisticated traditional music, and is a highly regarded artist in extensive circles. His father, Kimio Eto, is a famous koto player, and one of Japan’s most respected traditional musicians. Steve’s brother Leonard Eto is also a renowned taiko drummer. Steve’s family relocated to their native Japan in the mid 60s, and Steve first began playing with bands such as Pop Gun, PINK, and PUGS in the 80s, and launched his career as a performer, initially with Kyoko Koizumi’s debut tour, and supporting various artists such as Hotei Tomoyasu, COMPLEX, Tsuyoshi Domoto, and others. With the band DEMI SEMI QUAVER, Steve then established himself as a dynamic solo performer. Particularly inspired by the Amami Islands of southern Japan and their traditional essence, Steve has also participated in a variety of events as an ambassador of Amami. He has toured both within Japan and internationally throughout the past three decades, and continues to collaborate with numerous wellknown artists. He is particularly acclaimed for his expressive and dynamic performance style of percussion, which incorporates a variety of instruments, materials, and movements. Steve will join the November 9th show in London.