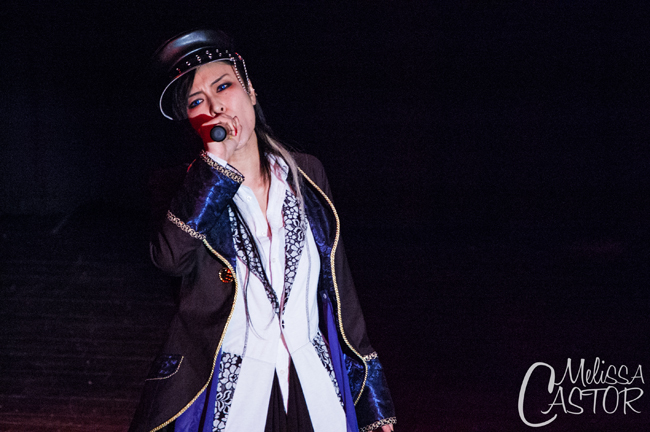 Akira was full of charisma as she took the stage at Castle Point Anime Convention in Hoboken, New Jersey on April 24, 2016. Akira made her solo debut as a singer in the summer of 2014, and additionally is the singer for the visual kei band DISACODE. You may also know Akira as a model for KERA fashion magazine.

Akira has performed in various countries and even in other cities in America, but this was her first time performing in New Jersey. The fans welcomed her with applause as she walked onto the stage.

“Hello everyone! I am Akira! I come from Japan! I am not good at English, but I will speak only English for this concert! Therefore, please take care of me.”

Akira’s outfit was both visual and androgynous. She wore a long coat, pants, a long shirt and a hat. During her Q&A earlier in the day, she was asked why she often chose to model in “boy” clothing. She said she does not like wearing skirts and prefers pants; it is the style Akira feels most comfortable in.

During her second song, “Fallen Angel,” Akira was dancing and moving to both sides of the stage, with the attendees clapping along to the beat. Everyone was engaged in watching her perform. It seemed the crowd was warming up to Akira and she was warming up to them. She was also asked at her Q&A if she ever got nervous when performing. Akria’s answer was no, she did not – that fearless attitude shows in her performance. She takes charge of the stage.

“Ok, make some noise!” she cheered and had the crowd chanted along with her. Akira took her hat off and tossed it into the audience. Those near the tossed hat went crazy trying to catch it, causing Akira to smile at the scene.

“The next song is the ending theme of Black Butler!” The song is “Aoki Tsuki Michite,” which is a song everyone in the crowd knew. It’s a beautiful ballad song, a quiet moment compared to the previous songs which were fast paced songs. The crowd was constantly interactive, waving their arms in the air, swaying back and forth with the melody.

“The next song is a cover! Please stand up! If you know this song, please sing together~” Everyone stood up and danced along to this happy, upbeat song. Akira was dancing on stage, encouraging the audience to dance too.

As the set progressed, she mentioned how it was getting hot on stage. She took her jacket off and attempted to throw it off to the side of the stage, but it got caught on her pants and ended up under her shoe. She then kicked the jacket to the side, showing the jacket who was boss.

Akira’s setlist was a nice mix of upbeat, happy, dancing type songs and slower, beautiful ballads. This mix showed the range of her voice. During a rock sounding song, everyone stood up without Akira’s prompting. She was even headbanging for a short while on stage!

Towards the end, Akira would get closer and closer to the edge of the stage, and those in the front rows would try and move closer to her. She would squat down at the edge and be eye level with the standing crowd. Everyone wanted to be as close to Akira as possible, and she knew how to tease the fans. At one point she even just sat down for a few seconds, singing and sitting and teasing the fans.

As another act of fanservice, she would tilt her head to the side and slide her top off her shoulder, showing her bare skin. It was a small thing, but very reminiscent of visual kei type fanservice.

“Are you having fun? Me too!! The next song is the last song!” was met with groans. “I’m very happy. Thank you! Last song, therefore, more, more, more, more!!!!!” Akira went out with a bang, a fast upbeat song that had everyone jumping. The chorus of the song even had, “Jump jump jump jump!” as part of the lyrics, with Akira herself jumping at these moments.

“Thank you so much!” she said as she left the stage. Shouts of “encore” started almost immediately! However, the venue lights went on, which typically signifies the show is over. Akira returned and said, “Thank you but…I have no more songs.” Her translator came out with her and further said Akira does not have any more songs prepared but she wanted to come out and say thank you one last time.

Following the performance was a photo and autograph session with Akira. 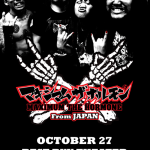