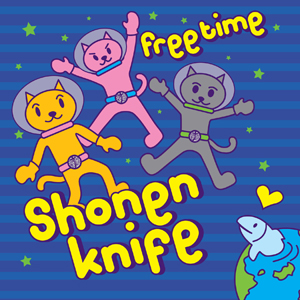 Sugar, spice and everything nice. Supposedly, that’s what girls are made of, and while after graduating from junior high we learn that isn’t exactly the case, there seems to be three girls in particular this phrase can still refer to.

Shonen Knife has been producing sweet symphonies for thirty years, and the trend continues with their latest album, “Free Time.”

Guitarist and vocalist Naoko Yamano has a knack for writing the catchiest of pop songs. Let it be known, however, that this isn’t the modern pop you’ll hear on Top 40 stations across the country; this is the way pop rock should be. Strong melodies permeate through each song, 1960’s influenced pop meshes perfectly with Ramones-styled punk rock, and while the instrumentation isn’t overly technical, the mainly simplistic chords and drum fills being played all have little flourishes giving Shonen Knife’s music it’s own unique flavor. Songs like “Rock n’ Roll Cake” and “Do You Happen to Know?” are so infectious, they’ll be stuck in your head after only one listen.

The lyrics are also absolutely ridiculous — but then, that is some of the charm to the band’s music. “Capybara,” for instance, is a song about the giant rodent with harmonies very prevalent throughout. “Rock n’ Roll Cake” is even more absurd as Yamano sings about making a cake out of rock n’ roll with fun, simple lyrics such as “Yummy yummy, roll the cake”, and then goes on to explain how she wishes she could hibernate inside said cake.

Not many bands could get

away with things like this, but for Shonen Knife, it’s become their trademark, and they do a really good job at being over the top. As the album continues, things do tend to get a bit repetitive and songs such as “Economic Crisis” begin to drag a little. But with the album being such a fun record to sing along to, it’s easy to overlook these points.

A few harder-edged songs pop up every now and then. “Monster Jelly Fish” rips open right from the start, and it also further confirms the that band loves everything to do with jelly, as many songs provide references to jelly beans, as well as plain jelly (as seen in one of their earlier songs aptly entitled “Jelly Jelly”). “Free Time” is yet another interesting chapter in Shonen Knife’s long career. Their sound has gone through many different changes over time, but the one thing that reminds constant are there sweet melodies and vocals, and it’s just as present in their music today as it was in the beginning of their career.