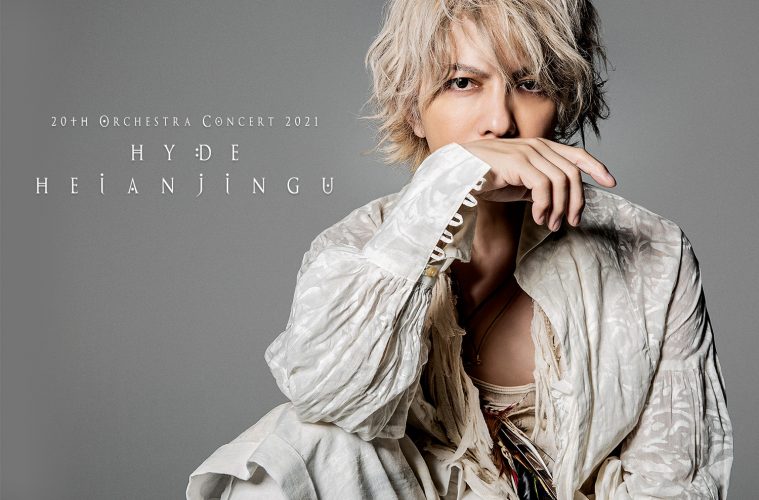 “20th Orchestra Concert 2021 HYDE HEIANJINGU” will be performed live at Heian Shrine in Kyoto, one of Japan’s top cultural landmarks. The two days of performances will also be broadcasted live in movie theaters across Japan and streamed live worldwide.

In addition to his multiple contributions to television, film, anime, and videogames, HYDE has set records as a recording artist and live performer in Japan and toured internationally on many occasions. HYDE’s latest song “ON MY OWN” was released in April 2021 as the ending theme of the popular TV anime MARS RED.

The magnificent and emotional orchestral production at Heian Shrine was chosen by HYDE to celebrate his 20th anniversary since his solo project started in 2001. Archive viewing of the concert will be available to fans so they can enjoy the event in their own time zones. International ticket information will be announced soon.

About HYDE:
HYDE, one of Japan’s most prolific rock artists, is the lead vocalist of L’Arc~en~Ciel, VAMPS, and recently most active with his solo project. Throughout his career, HYDE has performed sold-out shows at the famous Tokyo Dome 16 times, has over 60 top 10 singles on the Japanese Oricon Music Charts, sold over 40 million albums, and performed a sold-out show on the deck of the U.S.S. Missouri in Pearl Harbor, Hawaii, just to name a few of his many accolades.

HYDE’s latest album ANTI was digitally released globally on May 3, 2019, timed to kick off a Spring US tour headlined by In This Moment, culminating with a sold-out solo show in Los Angeles, quickly followed by his Fall 2019 tour with Starset, Palisades, and A Brilliant Lie.

HYDE digitally released his latest song “ON MY OWN” which is the ending theme of the popular TV anime MARS RED on April 9, 2021, and just announced that the celebration of the 20th anniversary of his solo career will continue with a Japan-wide summer tour “20th Orchestra Tour HYDE ROENTGEN 2021” kicking off in Tokyo on June 25, 2021.

About Live Viewing Japan:
Live Viewing Japan is a Japanese-based media distribution company focused on bringing a variety of entertainment properties to a global theatre-going audience. More information on the company and its projects is available at: https://liveviewing.co.jp/en/