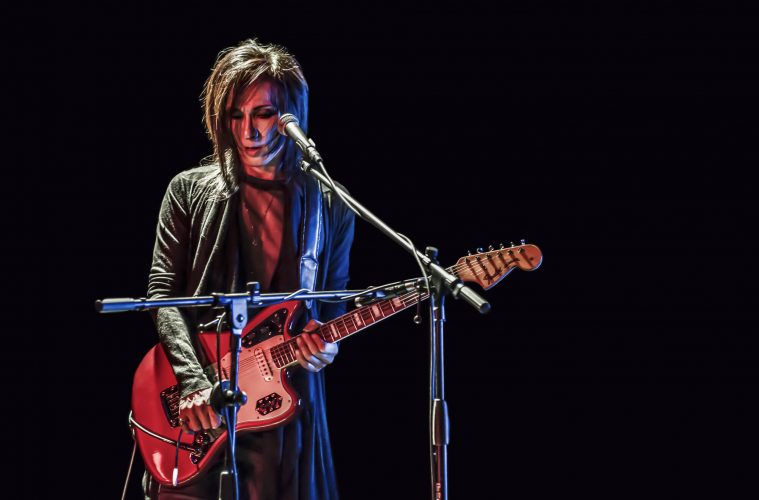 On August 27, 2017, MORRIE performed his first Solitude solo show outside of Japan in New York City to the delight of fans who have waited a decade or more to see the legend perform with their own eyes. Fans crowded into the intimate 99-seat Kraine Theater in the East Village; the stage held only a microphone stand for MORRIE, a Fender guitar amp, some foot pedals, a small table with two water glasses, and a lamp and a setlist/notes for MORRIE.

Shortly after 8pm, MORRIE emerged from behind a revolving panel at the back of the stage to the clapping of fans welcoming him to the stage. Slinging an electric guitar over his shoulder, the night began. His presence on stage commanded the full attention of everyone in the room. It was asked that nobody take photos or video and fans respected that, keeping their eyes on MORRIE instead, mesmerized by his soft yet powerful songs and guitar playing.

“Thank you for coming tonight, this is my first solo show outside of Japan! I hope you will enjoy until the end,” MORRIE said, before adding, “You can sleep.” To which the audience chuckled. “Actually, many people say that my voice is good for sleeping. So, don’t hesitate!” MORRIE’s voice and music is indeed very calming and would be good music to listen to while falling asleep!

MORRIE switched between two electric guitars between songs before eventually taking off the dark sweater draped over his shoulders, leaving him in only a tank top. “If you’re too hot or cold, tell me. I’m so hot.” Again, the audience laughed at this remark but when he asked, “Are you all comfortable? How about in the back?” everyone replied that they were good. He then switched to an acoustic guitar to play ‘Disquieting Muse’.

“That was DEAD END ‘Shin-En’ – ‘God Monkey’ from our first album [after reuniting in 2009], Metamorphosis. I don’t know if you have it or if you can buy it-” The crowd clapped and cheered, indicated they did indeed have the album, Morrie clearly impressed.

Next up was another DEAD END song, ‘Serafine’. As MORRIE began strumming the chords, he said to the audience, “You can sing.” The audience obliged and began to sing along as the house lights lit up the crowd to the surprise of all. MORRIE stopped playing suddenly. “Ok, you don’t have to,” he said, “It makes me nervous.” Regardless, fans were still thrilled to hear this song and clapped loud and hard at its conclusion.

MORRIE talked about how 1989 was a year that left a great impression upon him; it was an ending year. DEAD END recorded their last album, ‘Zero’ in London in 1989. It was the year the Berlin Wall was taken down and the Soviet Union collapsed. DEAD END broke up the same year. Serafine was recorded during that time and that is why it brings up those memories.

It was just a few more songs before MORRIE announced it was time for the last song of the evening. As MORRIE exited the way he arrived, through the revolving door panel at the rear of the stage, the audience clapped. And clapped. And continued clapping and cheering until MORRIE returned to the stage!

MORRIE once again thanked everyone for coming out to see him perform. He then proceeded to say, “Hopefully next year we can play as a band.” The audience gasped before MORRIE followed it up by saying, “You wish.” And everyone laughed. “I wish too.” (So I wouldn’t get your hopes up too much, it sounds like its more of a dream then a reality right now – but maybe one day!) “I love you though!” A male audience member shouted. MORRIE replied, “I love you all too.”

Two more songs, and then the night had come to an end.

Live report by: Melissa Castor
Photograph by: Tre
Special thanks to: MORRIE