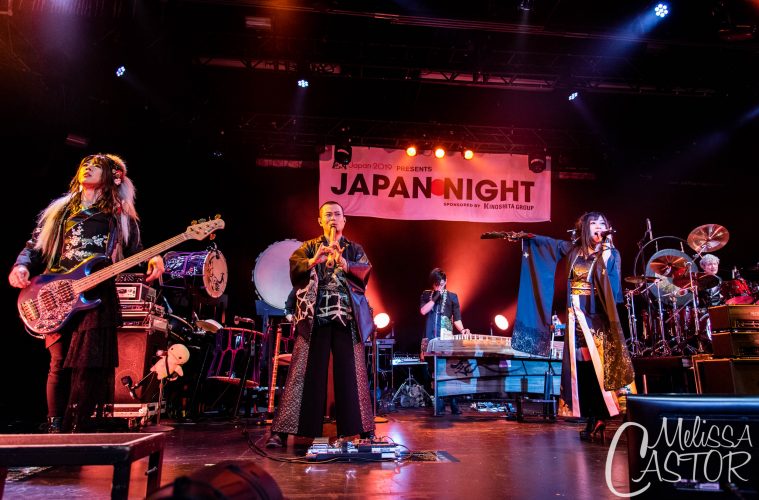 Japan Night was a one-night only special event in New York City on Sunday, May 12th, 2019 that was held in conjunction with the annual Japan Day at Central Park. Japan Day celebrated its 13th annual event this year, but the 2 concerts held in the evening were brand new! This review will feature the first of the concerts held at Playstation Theater, featuring HYDE and Wagakki Band.

It was a rainy, cool mid-May day in New York City but that has never stopped dedicated fans from lining up hours early to gain the best spot in the venue to see these artists from Japan up close and personal. Fans huddled to keep warm despite the rain, and once inside, it quickly became hot from the energy of everyone in the room!

First up was Sisyu, a Japanese calligraphic artist who demonstrated her skills on a large paper screen on the center of the stage. Two members of Wagakki Band – Kurona on traditional wadaiko drums, and Daisuke Kaminaga on shakuhachi (bamboo flute) – came out to help her performance by providing music while she transformed a blank canvas into a living piece of art right before everyones eyes. It was truly magic to see as she worked both in front of and behind the screen to create a mythical bird creature.

Next up was the 8-member Wagakki Band! Wagakki Band is the “Sensational Rock Entertainment Ensemble” that fuses Shigin (poetry recitation, one of japanese classic performing arcs0, Wagakki (traditional Japanese musical instruments) and Rock. Their performance is unlike any you’ve ever seen.

Wagakki Band’s fans came prepared with lightsticks which they waved to the music through the performance. The show started out gently, quietly, creeping along slowly but it quickly became fast and loud, merging the traditional with rock sound they are known for.

With 8 members in a band, you may think it is difficult for anyone to stand out but each member has solos and shows their talents on their traditional or rock instruments.

The show felt equal part rock concerts and traditional performance when singer Yuko Suzuhana came out in a fox demon mask and a traditional fan, performing for the audience. She “commanded” her band members and they played guitar vs. drum back and forth until she removed the mask and picked up her sword, swinging it around with precision and accuracy. Yuko used the fan throughout the performance, using it flawlessly that it appeared as an extension of herself.

“You guys having fun? Everyone has so much energy!” Yuko laughed, “I love New York!” She proceeded to tell how the band went out for dinner and the steaks they had were so large – 3x bigger than in Japan!

Flutist Daisuke said, “I’d love to live in the Hamptons!” – an area east of Manhattan located on Long Island. He talked about the huge houses out in the Hamptons, which any native New Yorker in the audience understood and agreed with.

Yoko asked if the audience liked her kimono and proceeded to explain that when you get married, a woman’s kimono becomes shorter – so if the kimono is long, you know you still have a chance!

It’s not a Wagakki Band show without a battle of the drums. Kurona on the wadaiko drums and Wasabi on the standard rock drums battled it out, each going back and forth drumming out beats with the next one copying the last. “Are you ready? Clap your hands!” Kurona made the audience clap along with him and chant, “Wagakki Band! USA!” Back and forth the two drummers went – suddenly the lights went dim and their drumsticks lit up! Their drumsticks acted as lightsticks, as the crowd continued clapping and waving their own lightsticks in the air for this fun moment.

Each member of Wagakki Band had their moments to shine throughout the night and during the last song, they each had another solo moment as Yuko introduced each member. The performance was over far too quickly for everyones liking, and Yuko shouted ‘Arigato!’ as the band exited the sage to echoing chants of “Wagakki!”

Finally, the last but certainly not least act of the night, was HYDE. HYDE has performed in New York City before with both of his bands, L’Arc~en~Ciel and most recently VAMPS, but this is the first time he has performed as “HYDE.”

As HYDE’s band walked out on stage, their faces were all completely covered by masks. HYDE himself had a Phantom of the Opera-esque style mask covering half his face. As the intro chords played to “Fake Divine”, the stage set up was covered in glow in the dark paint with HYDE’s graffiti like style logo standing out amidst the dark. The mood was set.

HYDE was in constant motion throughout the night, be it headbanging, which he did often, or dancing around the stage, he was never still for very long and the crowd felt the energy. When HYDE asked the crowd to sing or chant back, they gladly obliged.

“Inside Of Me” is a song by VAMPS which had the crowd cheering for more. The red lights flashed as HYDE growled into the microphone, “NYC, HYDE is here. I wanna see you all go crazy as fuck! Are you ready?” He then pulled out a megaphone, holding the microphone at the end of it to amply his voice even more.

HYDE’S mask finally came off during “Out” as he asked everyone to jump and of course, they did.

Throughout the night, the lighting and atmosphere on stage highlighted each song. HYDE had a theme and it was going strong. His long, flowing jacket bellowed around him as he moved. With a lot of fog and alternating green, red, and blue lights, it almost looked like the stage itself was moving to the beat. From the back of the venue, it was a wild effect to see.

The mood slowed down a beat with “Zipzang” featuring a keyboard solo and slower tune. HYDE showcased his beautiful vocal range as the yellow spotlight shone on him on center stage.

Another crowd favorite, “Who’s Gonna Save Us” had a great response, bringing the energy in the room back up. HYDE went very passionately into this song, falling to his knees on the stage to sing the “Ahh~ ahh~” parts, the audience singing along with him.

“Have you listened to the new album?” the bassist asked, “Do you want to hear more?” The crowd erupted.

“I wanna hear your voices,” Hyde said, “Scream scream louder!” as he held up his microphone stand, with his trademark flag attached, over his shoulder.

“Can you sing? Louder!” he asked again, before splitting the crowd into two halves. “Right side only. Can you sing and jump?” and he watched as the crowd did as he asked. “Left side, one more time?” and the left side of the venue did as HYDE requested until he was satisfied. “Perfect, New York City.”

But the interactive part of the show wasn’t over just yet! HYDE asked everyone to sit down. “Everyone, please, sing and jump.” Many looked around confused at their neighbors, until everyone in the venue squatted down with the space they had. Everyone was smiling as HYDE signaled to jump up and continue singing.

As HYDE announced it would be the last song of the night, the fans were saddened, but cheered up as HYDE jumped down to the barrier and sang to the crowd. The crowd surged forward, everyone trying to get closer. As he jumped up on stage, he once again thanked the crowd.

Not more than a few seconds had passed before everyone was off stage that chants of “One more song!” began, and it didn’t take long for the band and HYDE to reappear on stage.

“Turn on the lights,” HYDE asked everyone, indicating they should light up their cell phone flashlights. As the venue was illuminated only by flashlights, HYDE began to sing “Ordinary World,” a cover song by the band Duran Duran. It’s a beautiful cover song that is also the last song on HYDE’s latest album, “Anti.”

And thus the evening ended all too soon but with everyones hearts a little fuller than before.