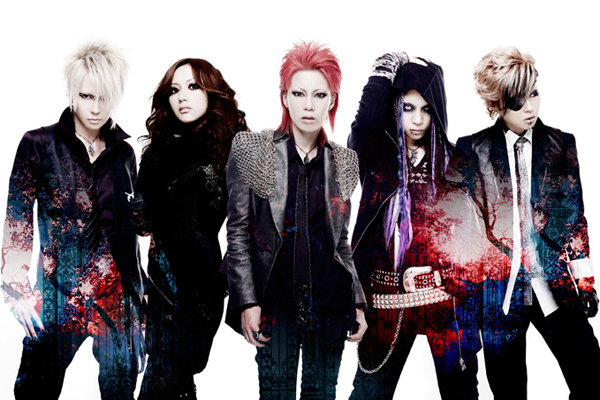 At Sakura Con this year, JrockRevolution.com had a chance to sit down with exist†trace. Among the many subjects we touched on were the past, the present, their future in going major and the international music scene. Enjoy!

The band introduced themselves as:

Last night was your first concert in the United States. How did you feel about the performance?

Jyou: The crowd was so energetic for us. That gave us a lot of power and we want to do it again.

You brought a Japanese flag and an American flag with ‘kizuna’ written on it. Can you give us the story behind this?

Jyou: Kizuna means ‘heart to heart’. There was a big earthquake in Japan and we received a tremendous amount of support from America. ‘Kizuna’ is about the connection between people, that travels even over the ocean, between Japan and America. We decided to write it on the flag to show our thanks.

Did you have any expectations or hesitations in performing in the U.S.?

Jyou: We were really looking forward to it – it’s something we’ve always wanted to do. We’re glad we were able to accomplish this. We had maybe 90% anticipation and 10% worry. Most of all, we really looked forward to it.

Is this the first time any of you have been to the U.S.?

Miko: I actually lived in Texas for a while. The other four have never been here before, except for Naoto, who’s been here on a trip once.

Were you able to sort of coach the others on what to expect?

exist†trace formed in 2003. Eight years is an impressive length for any band. Since then, has there been anything that has really changed in how you feel about music or how you create music in the subsequent years?

You’ll be going major on your return to Japan. What are you looking forward to the most with this change?

Jyou: We have no real plans to change just because we’re going major, no plans of being different than what we are now. If anything, we want to become more and be more [true to] ourselves.

You had a new release this winter, “Twin Gate”. What were some of the elements you wanted to bring out on it?

Jyou: We really wanted to allow for evolution while maintaining the ‘old’ exist†trace.

Now that you’ve performed in the U.S., do you have plans to return or perhaps do a tour?

[all the members perk up and look very happy, lots of smiles]

Jyou: Not yet. [she looks around the table, there’s a short exchange, laughter] But within ourselves, we do have such a plan! [general nodding from members as she speaks]

You’ve performed in Europe before – have you noticed a difference between fans in the two areas?

Jyou: Everyone is so powerful outside Japan.

Mally [speaks up]: They are. But I think… perhaps the Americans are even more powerful.

[Jyou laughs, and agrees with this.]

Omi, you’ve had blonde hair for some time, and for this performance, you changed to silver hair. Can you give some insight as to the change?

Omi: Up til now, I’ve done gold hair, black hair and red hair. This time, I thought it would be good to try silver. It interested me.

Having been together for eight years and going through the growing pains of creating and even clashing, what are some of the strongest things that keep you together as a group?

Jyou: We each say what we need to say to each other, [starting] from a long time ago. There were times that we fought in the past. Through the years, we’ve known each person has different personalities. Like, when this person is sad, you shouldn’t mess with them, maybe not talk to them; when that person is sad, you should talk to them… We certainly don’t fight as much as we used to, because we know each other’s rhythms and how we respond to various stimuli.

When you’re creating songs, does one person create lyrics and music more than the others, or do you trade off on both?

[They all look at each other. There’s some conversation, pointing at various members, etc., before they seem to settle on the answer.]

Miko: The person who composes the song usually writes the lyrics. There are times when, say, Omi has written something that Jyou will add lyrics to, for example.

Jyou: Mainly, most songs are written by Omi and Miko. [They nod.]
{module 366}
Since you’ve been in the U.S., what’s the best and worst food you’ve had so far?

[Everyone laughs.] Omi and Naoto at the same time: Root beer!

Jyou: Root beer candy. [This was apparently at the Rock Bottom Brewery the previous day, and everyone agreed they were terrible. Now for the best!]

Omi: Salmon was really delicious. [Someone else mentions the fries, and there are nods from a couple members.] So were the fries.

Miko: I ate spaghetti at Purple yesterday and it was really excellent.

[We were told the band was going to the Seattle Mariners baseball game right after their last two interviews, one of which was ours. The opposing team was the Oakland Athletics, and both teams had famous players from Japan.]

About the Mariners game tonight – are you interested in any particular player, or are you fans of baseball in general?

Miko [immediately]: Ichiro! [Ichiro Suzuki, who plays for the Mariners]

Miko and Jyou: Ichiro, definitely. [They are very enthusiastic, and everyone laughs, including them]

Jyou: And also Matsui. [Hideki Matsui, who plays for the Oakland Athletics]. [Miko nods in agreement, also a fan.] They’re both super famous in Japan. To see them close and together, but on opposing teams – I don’t know who to support!

[In case anyone was curious, someone had to lose the game that night and it turned out to be the Mariners.]

What do you have coming up in the near future that you can share, musically and with your activities?

Miko: On June 15th, we have our first step into the major realm with “TRUE,” which will have five tracks. Three days after that, we have our first one-man live with our major debut, so we want to show an exist†trace that is one step bigger than before.

Would you like to give a message to your fans in the U.S.?

Mally: America is a very big country and one stop can’t cover it, so we’d love to come and see everyone across the nation.

Naoto: Our set was eleven songs and it seemed like it was over so fast! We want to come back [for a one-man live] and really hear Seattle’s voice.

Omi: Through the music, I feel like we were able to have the same feelings as the people who came to see us. Even during the signing sessions and Q&A, we saw so many smiling faces and it made me so very happy.

Jyou: Americans are always so happy and so cheerful. I love it so much that I would love to live here. So I promise to be back! We promise we’ll be back soon.

Miko: It was so much fun coming here, I definitely want to come back and have an even stronger heart to heart direct connection with everyone — ‘kizuna,’ like what was written on the flag. I look forward to everyone having a bigger voice for us!

Our thanks to JapanFiles.com and exist†trace for the wonderful interview!