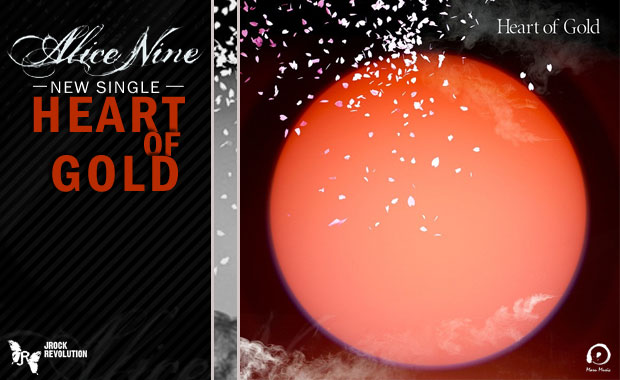 Alice’s Nine’s newest single, “Heart of Gold,” can be summed up as perfectly catchy and fun. None of the songs are particularly dramatic or memorable, unlike previous releases by the band which were harder. Despite that, any Alice Nine fans will be proud of the release. The production and mixing on the single are flawless, and the member’s talents are evident, although perhaps not exploited to their fullest.

The title track “Heart of Gold” is reminiscent of an anime or film theme soon — catchy and a little poppy, it’s the kind of song that has an almost teenage feel to it. The energy in the vocals and instrumentals paired with the pop-rock quality lend it that sense of adolescence — which isn’t a really bad thing. It’s definitely very enjoyable, but perhaps less mature than their previous releases.

“Ray” is better representation of Shou’s impressive vocal range. As far as major VK vocalists go, Shou has arguably one of the most emotionally drenched voices. But it’s the guitar riffs that really steal show and make this song interesting, they aren’t particularly dramatic but change frequently and seamlessly. The main problem with “Ray” is the high pitched ringing tone which pops into the chorus and throughout the song. It has an alarm clock quality which abruptly breaks into an otherwise okay song.

The the third song, “Haikara Naru Rinbu Kyoku,” can only be found on the regular addition of  the single. It brings in a little variation in style. There’s a pop//rock-jazz quality to it that’s bass centric and instrumentally heavier than the other tracks, meaning there are long pauses where Shou’s voice doesn’t carry the song. It’s repetitive enough that the lyrics are easy to remember and sing a long with.

Ultimately, “Heart of Gold”  can be described as fun and perfectly adequate. Alice Nine fans will enjoy the single, and the fun, catchy quality of it are the perfect end to summer. Still, with a band like Alice Nine — who are known for their talented musician and the ability to fuse a fuse rock and pop seamlessly — the single feels a little underwhelming in comparison to what the members are capable of.