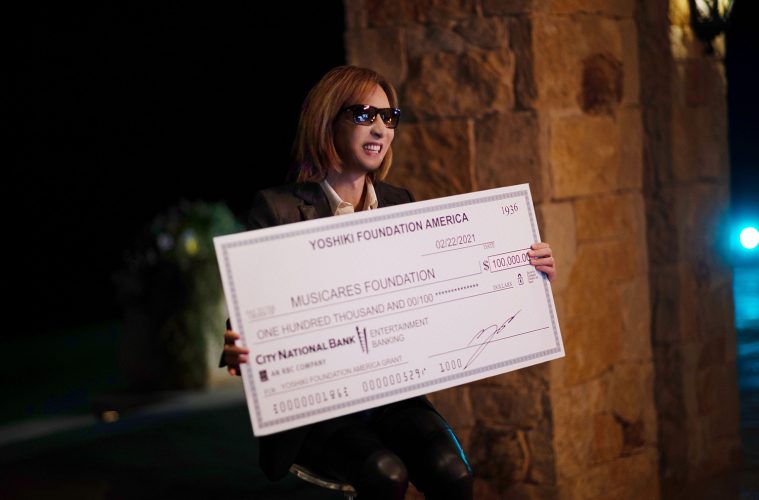 In March 2021, YOSHIKI donated $100,000 in support of mental health to MusiCares®, a partner of the Recording Academy® and the leading music charity, to help music creators and industry professionals affected by depression, anxiety, suicidal thoughts, or other mental health concerns.

The global pandemic has seen a spike in depression and suicide, in addition to loss of jobs, touring, and work in all areas of the global music industry. Mental health and well-being are issues particularly close to YOSHIKI’s heart – as documented in the 2017 award winning documentary film We Are X – which details the artist dealing with the suicide in his family and bandmates.

Yoshiki said, “If I didn’t have music and my fans’ support, I could have easily been the one to take my own life like the people who were close to me, including my father and my band member. I’d like to not only contribute from my experience but try to support those in need. It’s such an honor to be working closely with MusiCares on these issues.”

Yoshiki Foundation America’s annual grant of $100,000 to MusiCares will be used to help those in the music industry in need of assistance in the following ways:

● Assist music professionals in receiving individual psychotherapy, psychiatric care, inpatient and outpatient services, and group therapy
● Expanded mental health educational content will be available through workshops and panels offered throughout the year
● Sponsor an annual moderated panel about Suicide Prevention and Education
o Panel will include YOSHIKI, invited guests, therapists, educators, artists, and experts on suicide prevention and education, and will be live streamed on musicares.org and yoshikifoundationamerica.org

“We are so thankful to YOSHIKI and Yoshiki Foundation America for their continued support of MusiCares. This annual grant will help us continue to provide important mental health services to the music people we serve,” said Laura Segura, Executive Director of MusiCares. “Artists, bands, stage and touring crews and so many others in the music industry have been greatly impacted by the pandemic. It is our responsibility to support them with the necessary services to help them make it through these difficult times.”

YOSHIKI – composer, producer, classically trained pianist, rock drummer, and leader of rock group X JAPAN – has lived in Los Angeles for over 20 years and owns a recording studio in Hollywood. As a rare artist who has roots in the U.S. and Japan, his position as a world artist makes him aware of the challenges facing not only these countries, but the global music industry as well.

In recognition of years of his active philanthropy and influence, YOSHIKI was selected as one of Forbes Asia’s 30 Heroes of Philanthropy in 2019. This month, he was also awarded a Medal of Honor by the Government of Japan. His philanthropy includes this 2021 MusiCares® donation, which follows up the $100,000 he donated in March 2020, as well as $100,000 in October 2017.

YOSHIKI and Disney’s collaborative music documentary is now airing on Disney+ in the U.S. HERE. He is currently working on a number of music and film projects due for release throughout 2021.