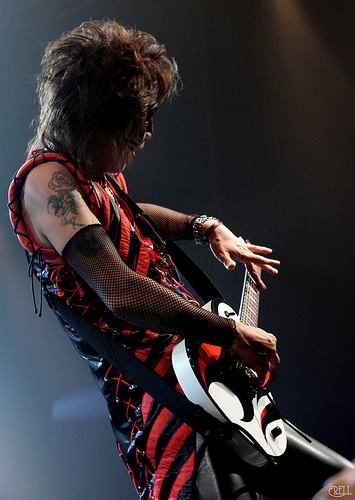 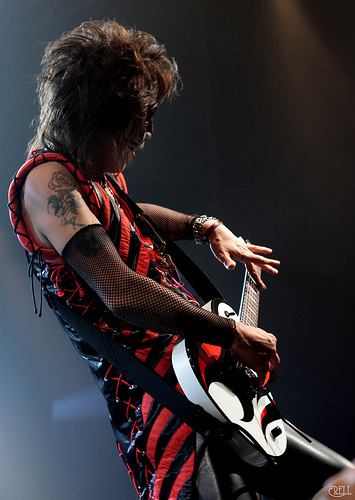 This Saturday, June 6th at the Viper Room in Los Angeles, among other guests, LAS VEGAS ALL STARS will perform with a special guest from Japan – Takashi O’hashi. Better known as Jail O’hashi, previously part of Seikima-II, Cats in Boots and SLUMLORDS. Since moving to the U.S. in 2012 to pursue his solo work, his next project BIG BRIDGES, released their album “Will to Ascend” on March 10th, 2015.

You can find Jail O’hashi here:

Buy tickets to the show at the Viper Room here: http://www.ticketweb.com/t3/sale/SaleEventDetail?dispatch=loadSelectionData&eventId=5695195&pl=alaviper2

May 5th, 1965 – Takashi O’hashi was born in Toyohashi City, Aichi Prefecture, Japan. He began playing the guitar when he was fourteen.

1985 – He became the guitarist for the CBS SONY recording new artist SEIKIMA-II and in September debuted as Jail O’hashi. He played guitar on the 1st, 2nd, and 3rd albums. On the 3rd album he was the main composer and very quickly the band broke the record charts with their releases.

1987 – He left the band and in June of that year took a trip to the United States. In October he and Bassist Yasuhiro ‘Butch’ Hatae migrated to Los Angeles, there they met Singer Joel Ellis and Drummer Randy Meers. And the very first Japan/U.S. combination rock band CATS IN BOOTS was formed.

May 1988 – CATS IN BOOTS released their EP “Demonstration – East Meets West” in Japan. For 3 months they performed Sold Out shows in Japan. In September the band acquired a recording contract with the American major label EMI-USA.

1989 – CATS IN BOOTS released their debut album, “Kicked & Klawed,” which was produced by Mark Opitz, who engineered and produced AC/DC, INXS and more. For 6 months the band toured Japan and America, but the perpetual differences in music, customs, and backgrounds between the members triggered the eventual breakup of the group. Then he migrated to New York.

1991 – He welcomed British Singer Kevin Saunders, Bassist Hal Cragin and Drummer Milton Sutton in making his first solo project album, “Neither Reality Nor Fiction” which was released by Toshiba EMI.

1995 – He came back to Japan and participated in SEIKIMA-II Debut 10th Anniversary live event and later contributed the songs “Akuma No Blues” and “Ass Hole.”

1996 – He formed the band THE OUTSIDERS. He expanded and increased his amount of live performances.

2003 – He visited Joel Ellis in Cleveland, Ohio and they started making music again. In August CATS IN BOOTS held a limited reunion live shows in Japan.

2005 – He released 2 solo albums, “8 Track Recordings 1995-1997 Remixed” from the source of demo recording tracks at his home. And the other album, “Rock ‘n’ Roll” directly expressed his Blues influences. From November-December He participated in SEIKIMA-II Debut 20th Anniversary limited reunion live events.

2006 – Solo album, “Child Of Nature” was released. The album came freely from his imagination and he traced these ideas into producing the first instrumental work of his career.

2007 – He limited his guitar playing to acoustic guitars only and released the acoustic album, “Acodelia”.

2008 – He released “One Man Live!” (CD+DVD) which was recorded from multiple acoustic live performances. He decided on starting a collaboration projects such as JET IN BOOTS and THE THREE RIVER BLUES BAND.

2009 – He fully participated in SEIKIMA-II world-wide release of the English lyrics self-cover album “Akuma Nativity (Songs Of The Sword)” released by avex trax.

2010- He as E.M. Jail O’hashi was on SEIKIMA II 25th year anniversary world tour where they kicked off their first gig in Dallas, TX in June.

In 2012 he relocated to the United States to work on his next U.S. project since CATS IN BOOTS. Currently he has just established his official U.S. operations and has released his latest U.S. project BIG BRIDGES “Will to Ascend” on March 10th, 2015. He will also be preparing for SEIKIMA II 30th year anniversary this late 2015.