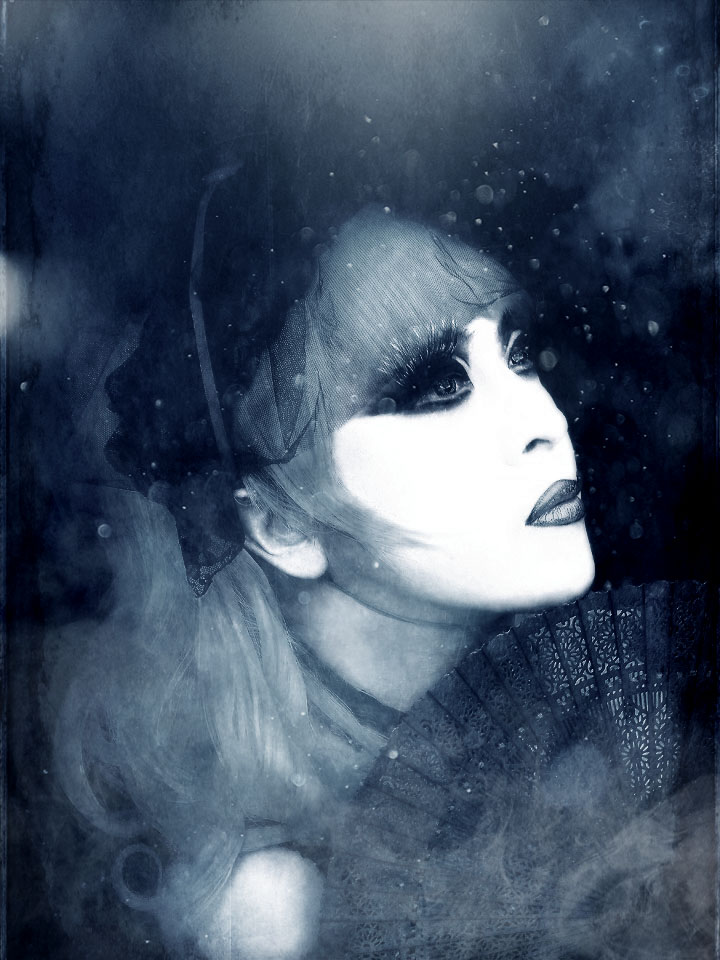 While in Japan, JRockRevolution.com had the opportunity to interview DaDa as well as Dynamite Tommy about the KOMACHI2266531DarkLolita brand. Special thanks to Jin for translations!

KOMACHI2266531DarkLolita is a fashion brand that currently specializes in stockings with Gothic Lolita influences. Earlier this year, they made their debut at Anime Expo in Los Angeles with a fashion show that we covered. Most recently, they’ve collaborated with AKI from ARLEQUIN and minpha from PENTAGON on two new designs. Please see links at the end of the article.

A little about DaDa: Perhaps known more for his involvement with the band Velvet Eden, DaDa has never been constrained by a singular role. His artwork is featured in merchandise for bands such as DIR EN GREY. He has a hobby of model cars. His passion for many visually creative things and for gothic lolita style makes this endeavor only natural. There is also a definite love for cats as well.

The name for KOMACHI2266531DarkLolita was, according to DaDa, something that sounded very cute and very Japanese, which is why it was chosen. Although the stockings are still a new release, DaDa said that he has followed the feedback on the designs of the stockings and that can influence how future designs come about for the stockings.

In addition to the stockings, KOMACHI2266531DarkLolita has face handkerchiefs, a seemingly unusual departure from the stockings. “Because the brand is lolita and rock, it’s something in between, something both sides can wear. If I make something only for lolita, then maybe rockers won’t wear it.” Since he mainly works on Gothic type designs, it’s something he’s interested in incorporating slowly.

For someone naturally visually creative, we asked where he might go for inspiration anywhere in the world. “The Russian countryside,” DaDa answered. He’d been there once and there was a lake that was very clear, so one could see to the bottom. “There was a church in the bottom of the lake. It was morning and the top had been poking from the surface. It was crooked, but visible.” He’d asked his guide to stop so he could look at it, but his guide at the time refused. It was perhaps a town or something that had been submerged and the church, being the tallest building, managed to be visible. “I think I would be able to make more new designs by going there again,” he added. This would definitely be a sight to see and I hope he’s able to return to that countryside again someday.

Pop up shops, while being common in Japan, aren’t so common in someplace like the United States, but we asked if he might consider opening a pop up shop. A possibility, he advised, with the right conditions. Perhaps it’s something we can still hope for here in the States.

From here, we went a little more into gothic lolita. How it’s often associated with the macabre and death and one thing that he would want to do before dying. After a little deliberation, DaDa answered rather simply. “To squish my face into the tummy of a cat.” There was nothing grandiose about his response and that’s very much the nature of this artist at heart.

Given his recent collaborations with Aki of ARLEQUIN and minpha of PENTAGON, we asked who DaDa might want to collaborate, alive or dead. “hide,” he replied. Imparting that hide had been the one to name him. He had been at an event where he was to dress to be in a band, but he dressed as this monster/Ultraman. But hide had said it was okay and later he received a letter from hide that said, ‘your name is DaDa’. Prior to that, he had been using his real name, not a stage name.

With music and fashion often being very connected, and with DaDa being focused in both areas, we asked how he viewed fashion as an extension of music. It was very much like that church he spoke of, he said. “I want to bring together elements of the one realm into the other and vice versa.”

DaDa shared a story of his youth at this point telling us that in his hometown, there were a lot of abandoned buildings that were left over after the war. He had been told not to go near them as it was in bad manners and disrespectful to the dead. But when DIR EN GREY went on tour, they found that Germany had a lot of similar places. He felt that although there were some differences, there were also similarities. Inspired, he wanted to bring that kind of feeling into the clothes that he designed so people might have a hint of that atmosphere of abandoned buildings to such places in Europe.

When it comes to other outlets of creativity, DaDa said that his hands are pretty full with fashion right now and his concentration is on that. Even for articles, such as teapots or things other than wearable fashions. He hasn’t really thought about it. “But if I do have a chance, it will be something strange.”

In the next two years, DaDa sees KOMACHI2266531DarkLolita expanding beyond the stockings. “I have something in mind that’s unique,” he promised. “I want it to be something so different that one’s first reaction is ‘what the hell’, but then it eventually becomes accepted.” As a visionary artist, there is no doubt whatever DaDa designs will not be something simple.

When it comes to more widely known items with Gothic Lolita, DaDa mentioned that he doesn’t like corsets. He wants something easy to wear and easy to move in. Were someone to invite him to eat, he wouldn’t be able to do that in one. “The best part of wearing a corset is taking it off,” he laughed. “I want to be able to design clothes that look like you’re wearing a corset, but it’s not a corset.” Feeling a design such as this will still have a slimming factor to it. Having a slendering effect is one of the reasons he has designed in the way he has for his line.

In fact, plus sizes are, in general, becoming more popular in Japan. There are magazines with plus sizes as well, he offered. He does have friends in design and has asked some of them why haven’t they designed in plus sizes and the general response was that it wasn’t possible or ‘lame’. In that way, he felt this was a good opportunity for him to enter that market. “I have many friends overseas,” he said. “One time, a friend bought something online and maybe didn’t check the size. When it arrived, it didn’t fit and it was very upsetting for her. She threw away the item and cried.” It was another motivating factor for him to provide an avenue of fashion for more people.

Editor’s (Ali’s) Note: Our most sincere thanks to DaDa for taking the time for our interview. He has definitely been one of my favorite subjects and I look forward to seeing what his creative nature offers us in the future. Special thanks to Jin for translation on our side.