Home Made Kazoku and T.M. Revolution at Otakon 2013

Anime ambassador, occasional voice actor, Sightseeing Ambassador of the Shiga prefecture—performer Takanori Nishikawa has a lot on his metaphorical plate. Best known for his solo project T.M.Revolution, he’s sold millions of albums worldwide and is responsible for some of the most memorable themes in anime, including “Heart of the Sword” from Rurouni Kenshin.

He returned to OTAKON on August 10, 2013—ten years after his North American debut performance in Baltimore.

Fans of T.M.R. swooned at his Q&A, some breaking down in tears at the chance to ask the artist questions. There were multiple accounts from fans who had waited 10 years for his return, as well as questions surrounding his career. One particularly brave lady even questioned his tendency to wear “hot pants” during his performances.

There are two necessary attributes for any performer able to gracefully and humbly answer questions concerning short shorts: charm and experience. T.M.R. displayed both qualities on and off the stage.

The other half of Saturday’s performance was Home Made Kazoku, group with their own distinctive hip-hop style and fiercely loyal fans.

Consisting of three members (two of whom speak fluent English due to having spent part of their childhoods in the U.S.), were able to expand their fan “family” with catchy beats and genuine warmth. Fans (including several actual families with small children) came from as far as Japan to see their performance.

The trio of Micro, Kuro and DJ U-ICHI opened the Saturday concert with high energy. Far from the normal standard of “opening acts,” HMK had the crowd dancing almost immediately. While many attendees were probably only aware of the handful of anime themes HMK has produced, the crowd was immediately engaged in the hip-hop/pop/rap fusion, showing that the group has a lot more to offer than just a handful of anime songs.

The boys of Home Made Kazoku have mastered the art of sharing the audience’s attention. Vocals, both singing and rapping, from vocalists Micro and Kuro flowed together seamlessly. The cohesion of the trio is probably one of the many ingredients to their success, but they also enjoyed a small rivalry—dividing the audience for participation and pitting the two halves against each other in a well-coordinated noise-making contest.

HMK welcomed in new fans with their own rendition of “We are Family.” By the time they left the stage, the consensus from the audience seemed to be that that they were, in fact, one big, musical family.

When T.M.R. entered the stage, the noise level from the audience was somewhere between “crashing 747” and “imploding planetary core”—that it is say, it was very, very loud, and when he lifted up his shirt for fans towards the end of the concert, it was even louder.

While T.M.R. fans screamed and danced and cried, the man himself did what he came to do: He put on a performance, and it was one for the books.

If stripped of the elaborate costumes and dramatic hand gestures, T.M.Revolution would still have a presence unlike any other. His voice is big. It’s drenched in emotion (excuse the cliché). His lung capacity is incredible, and paired with his precise vocals, it makes for a pretty intense listening experience.

To end the show, OTAKON solved an equation no one had thought to ask: If 1 + 1 = 2, then what does HMK + T.M.R. equal? The answer is awesome, in the literal sense of the word: inspiring awe. In this case, awe sounded a lot like approximately 10,000 screaming fans.

For those who missed the concert, or those who just missed the chance to buy an album, Home Made Kazoku and T.M.Revolution’s music can both be found on iTunes for purchase.

Photography by: Ali W. (except one as noted by David Weaver) 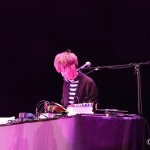 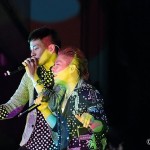 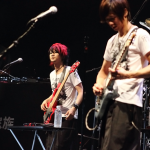 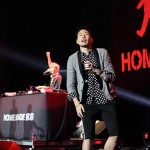 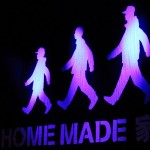 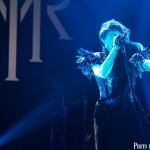 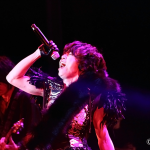 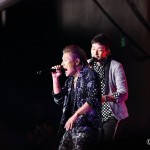