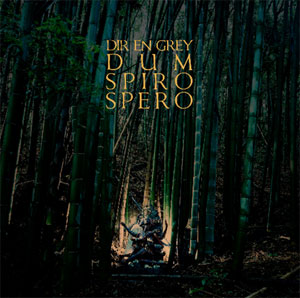 To advance the Tuesday, August 2 release of DUM SPIRO SPERO, internationally acclaimed band DIR EN GREY have announced that they will give fans an exclusive preview of the new music.

The album–out on The End Records–will stream in its entirety on the band’s Myspace page (www.myspace.com/direngrey) accessible from the homepage Saturday, July 30-Monday, August 1.

The unique, artful Japanese rock band has earned a reputation for pushing boundaries, breaking rules and continuing to shock and amaze their fans around the world. DUM SPIRO SPERO is no different.

Joe Bosso of MusicRadar.com wrote: “On their eighth studio album, Dum Spiro Spero, the Japanese heavy metal quintet Dir En Grey whip up a fierce, punishing sonic storm that few other bands have ever realized. The hooks may be elusive, but as a pure sensory experience–dark, dense, relentless waves of downtuned guitars crash from every possible direction while head-cracking beats pummel the listener (to say nothing of singer Kyo’s tormented howls)–it’s a 14-song epic that defies easy categorization.” (7/26/11)

Elsewhere, Revolver’s Mikael Wood noted “the slithering jab-and-pummel of cuts like ‘Juuyoko’ and ‘Shitataru Mourou’” and the “wisp of wonder from frontman Kyo’s high searching vocals, as in the strangely beautiful ‘The Blossoming Beelzebub.” (7/26/11). And Beverly Bryan at MTVIggy.com said that “…their latest is a gorgeously irrational labyrinth of deconstructed death metal so ruptured and dissected that it shares a border with the mad experimentalism of Boris. In that sense, it may have even broader appeal than their previous work. It will lure in new fans…Dir En Grey admirably continues to sing in Japanese but their music has long since transcended language barriers for fans around the world. Perhaps in this case, the medium is the most important part of the message.” (7/18/11)

In other recent news, DIR EN GREY–vocalist KYO, guitarists KAORU and DIE, bassist TOSHIYA and drummer SHINYA–exclusively debuted the music video for “DIFFERENT SENSE,” the new single off DUM SPIRO SPERO at ArtistDirect.com: http://www.artistdirect.com/entertainment-news/article/dir-en-grey-debuts-music-video-for-different-sense-on-artistdirect-com/9008304. The themes from the new video and album also happen to directly coincide with the recent turmoil in their native Japan. TOSHIYA explains, “We live in a world where we don’t know what is the truth and what we should believe in. We just wanted to put some hope into the music we created.” KAORU continues, “And, the title is what we can say to the world as the people of Japan.” The title translates to the Latin phrase, “While I breathe, I hope.”

DIR EN GREY will launch in Europe next month, continue on to South America before finishing off the year here in the States.