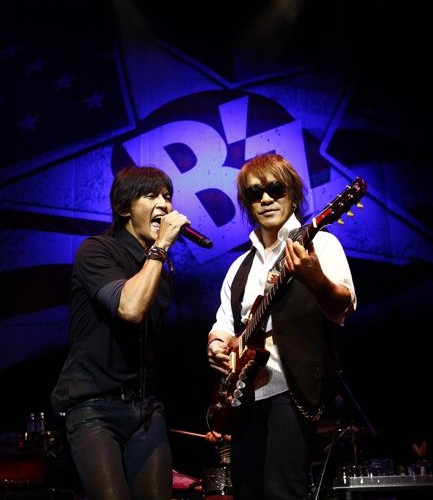 Anywhere in the world, it’s an accomplishment for any artist to have over 80 million albums sold with 17 studio albums and 49 singles – over 40 of those topping the best seller Oricon chart at #1. In their native Japan, it has marked B’z as the best selling band of all time. Taking chances and breaking records has become their forte. Though their U.S. performance was eight years ago, the wait seemed well worth it to a sold out audience at the San Francisco Fillmore on Friday, July 22nd.

The line started queuing sometime in the morning of July 22nd for the show, tickets to which had sold out almost immediately. Many fans made the journey from Japan to see this legendary band play a venue as intimate as the Fillmore, a legend in and of itself. Other fans we spoke to came from as far as Singapore, domestically from New York City, local areas and even from Los Angeles despite the fact that B’z will play there on July 24th. The weather became a challenge to contend with as temperatures turned colder, yet fans braved the chill to protect their place in line.

When people arrived indoors, most were quick to find a favored place near the stage. Within a short time, the venue was a third filled with a long line forming for merchandise. Just after nine p.m., the place was packed. The lights suddenly went out, blue stage lights illuminated the front and a roar from the crowd greeted B’z as they hit the stage. On the go from the first moment as they launched into “My Lonely Town”, a song originally sang in Japanese and converted to English lyrics.

In fact, many of the songs played were redone with English lyrics, an ambitious feat that Inaba managed without interrupting the natural ebb and flow of an energetic performance. Other songs treated to English lyrics were “Splash (California Splash)”, “Ichibu to Zembu” and “Brotherhood”. English or not, fans were singing, interacting and cheering.

“Share your energy!” Inaba Koshi said at one point, prompting a surge of enthusiasm from a hot and frenzied crowd. “I’ll share mine too!” Just as energized was Tak Matsumoto, whose effortless guitar playing was as awe inspiring live as recorded. While interacting with the crowd, Inaba spoke in both Japanese and English, allowing all members of the audience to share in his words. Tak masterfully inserted impromptu Blues pieces as a seamless transition from one song to the next.

Long time fans remembered hand motions from previous performances adding them throughout. Both Inaba and Tak worked the stage with ease, playing to the crowd at all angles. Inaba made use of many stage pieces, jumping off them throughout the night and swinging his mic stand. Near the end of the night, after taking a drink of water, he made a spray of it over those closest to the stage.

Once the encore was complete, fans were slow to leave the venue. Some congregated outside to discuss favorite songs and memories of B’z from performances in Japan. Still others, made weary from enthusiasm, wandered away to find transportation back to hotels and homes.

B’z plays today, July 24th at the Club Nokia in Los Angeles, CA. The show is sold out.