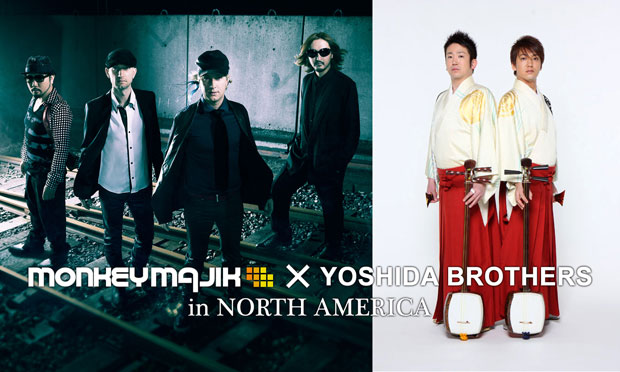 After two years since Yoshida Brothers last tour in the U.S, they will finally come back to North America this fall.

Double-headlining with a rock band Monkey Majik, from Otawa, this tour is one of the events they host to support rebuilding Japan from the disaster of following the earthquake and Tsunami.

=Please check the unique collaboration between Rock and Shamisen!=

[Yoshida Brothers]
The Yoshida Brothers were born and bred in Noboribetsu, Hokkaido. Each picked up the shamisen at the tender age of five, and began studying Tsugaru shamisen under Takashi Sasaki I in 1990. After sweeping prizes at national Tsugaru shamisen conventions, the brothers made their major debut in 1999. The debut album sold over 100,000 copies, which is an extraordinary figure for a traditional folk music release.

[Monkey Majik]
Monkey Majik is a Japanese-Canadian rock band based in Japan. Consisted of Canadian brothers, Maynard and Blaise as well as Japanese members tax and DICK, their music is a unique mixture of western and eastern influences. They made a mainstream success by releasing numbers of hit songs since 2006. When Japan was hit by Tohoku earthquake and tsunami in 2011, they went to Tohoku and helped clean-up and rescue.