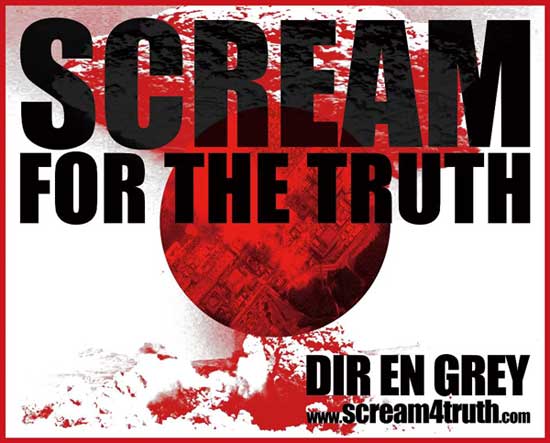 DIR EN GREY ASKS THE WORLD TO ‘SCREAM FOR THE TRUTH

Japanese rock band DIR EN GREY has been candid about their feelings on the current state of their native country, wanting to know about the high radiation levels have been detected after this year’s nuclear disaster that followed the massive earthquake and tsunami. Having issued an open letter to the world on August 1 that received international media attention, the unique and influential band are now taking their message a step further: they are asking the world to help them “Scream for the truth.” Yesterday morning–Monday, October 3–a new billboard was revealed in New York City’s Times Square displaying provocative nuclear images. DIR EN GREY have also launched a new site, Scream4Truth.com to aid in their mission of demanding accurate information from Japanese officials surrounding the disaster which took place March 11, 2011.

In a video message on the site, DIR EN GREY share their honest sentiments. Guitarist DIE says, “I feel we can’t just get caught up in the moment of what happened, but we have to find a way to come to terms with the situation and keep on living within that.” Vocalist KYO posed the question, “In a situation when you have no idea what is true or not, what is the best course of action to take? It seems like you can’t do anything” and drummer SHINYA adds, “When you’re being guided down the wrong path, you can’t just stay silent.” Guitarist KAORU continues, “It has always been this way, but I feel that everyone senses now more than ever Japan is a country filled with lies. It is entirely up to each person to determine what is true.” Bassist TOSHIYA proclaims, “In order to stop this situation from getting any worse than it is, I think now is the time for us to learn and spread the truth.”

On the music front, DIR EN GREY recently released DUM SPIRO SPERO, a 14-track unrelenting musical assault. Kyle Anderson of Entertainment Weekly noted: “Japan’s finest shape-shifting metal machine’s latest may be their most bipolar, but it’s also their most complete…moments of beautiful brutality…punishing slogs through the grind-and-growl swamp.” (8/5/11) Meanwhile Andy Hermann of Metromix described the new collection as, “…dark, progressive and pummeling” (8/2/11) and Joe Bosso of MusicRadar.com affirmed it a “…fierce, punishing sonic storm that few other bands have ever realized…dark, dense, relentless waves of downtuned guitars crash from every possible direction while head-cracking beats pummel the listener.” (7/26/11)

The internationally respected band has been consistently touring for the last decade and will be making their way back to North America this winter (dates below). Since DIR EN GREY was recording DUM SPIRO SPERO when the earthquake hit Japan, it has changed their outlook on the future. The band explains, “In our personal experience of the earthquake and its aftermath, one thing that really hit home is the reality that you can die at any time without knowing it. We don’t know what is waiting for us as we move forward, but as long as we are alive we want to take on this tour with a sense of determination.” Catch DIR EN GREY’s explosive set in these North and South American cities: