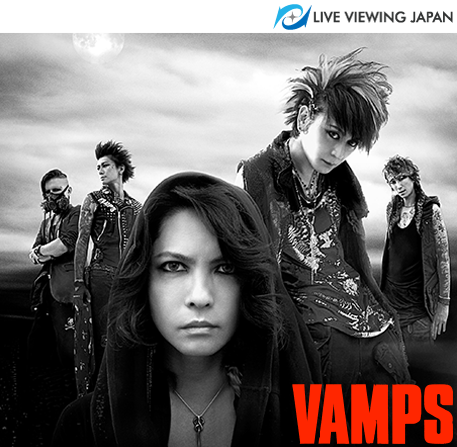 Since 2011, Live Viewing Japan has been broadcasting premium contents of Japanese culture to movie theaters in Asia, Europe, the United States as well as South America. In the hope that the world will enjoy more Japanese contents in real time, Live Viewing Japan has decided to expand their media distribution in the form of online live streaming, with VAMPS’ final concert of 2014-­2015 Live Tour chosen as the very first show to be presented in both ways.

As a collaboration project of HYDE (L’Arc~en~Ciel) and K.A.Z (OBLIVION DUST), VAMPS immediately conquered the Japanese rock scene at a furious pace with their captivating music and dramatic live performances. Soon after VAMPS started, not only did all of their music releases rank high on the Oricon Music Chart, the band also played great numbers of sold­-out shows and received extremely frenzied response from all across Japan. In mid 2008, VAMPS played 46 sold­out domestic shows at the Zepp live houses, with multiple shows at each venue.

Even finding success at home, VAMPS never stopped expanding their activities overseas. In 2009, the band performed their first U.S tour to ten cities with remarkable success, for which they were awarded the “Billboard Japan Ranking International 2009”. They embarked on their first world tour in the fall of 2010, which covered Taiwan, United States, Spain, France, China, and Chile. In 2013, after signing with Live Nation and Universal Music Group, VAMPS went on another world tour that started from Europe and finished in Los Angeles and New York with support by Sid Wilson of Slipknot. VAMPS will perform at two festivals in Florida in 2015, the Fort Rock Festival on April 25 and Welcome to Rockville the following day.

Some of the most popular singles and albums of VAMPS include: LOVE ADDICT, EVANESCENT, VAMPIRE’S LOVE, BLOODSUCKERS, and the all­-English album SEX BLOOD ROCK N’ ROLL.

About Live Viewing Japan:
Live Viewing Japan is a famous Japanese­-based media distribution company dedicated to introducing Japanese artists of various genres around the world. More information on the company and its projects is available at: www.liveviewing.jp