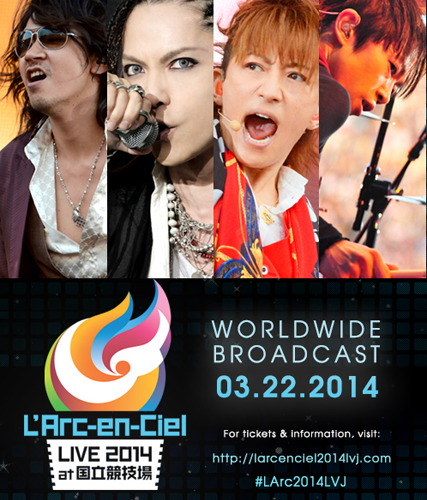 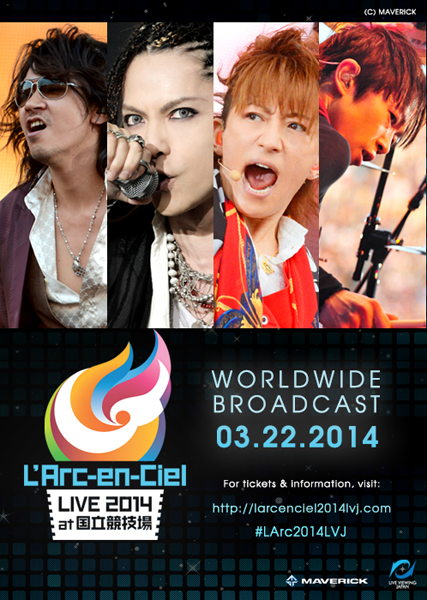 “Live Viewing Japan is very pleased to share the spectacular stage presence of world-famous Japanese rock juggernaut, L’Arc~en~Ciel, with 10 major cities all over the United States, in the form of a delayed satellite broadcast of their long awaited “L’Arc~en~Ciel LIVE 2014 at National Stadium”.

Chosen as the venue for the opening and closing ceremonies of the Tokyo 2020 Summer Olympics, the iconic National Stadium only played host to four most influential Japanese music bands’ performances as of 2012, with L’Arc~en~Ciel included. Being the band’s second time to play at this enormous venue as well as their very first show since the last world tour, the significant “L’Arc~en~Ciel LIVE 2014 at National Stadium” sparked worldwide attention as soon as it was announced. In response to fervent requests from the U.S. audience, the second day (March 22nd, 2014) of the two-day concert will be presented in 10 theaters across the United States as a special delayed satellite broadcast.” (Source: official website http://larcenciel2014lvj.com/)

Times for the chosen cities is as follows:

*Please be advised that the Framingham 16 is now the theater for the Massachusetts broadcast. Sorry for the inconvenience.