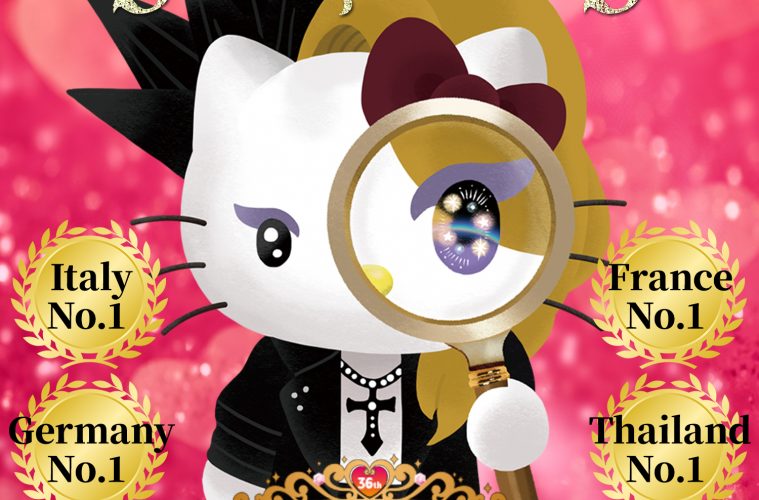 The results of the prestigious “2021 Sanrio Character Ranking Contest” were announced on Tuesday, June 8th, and yoshikitty has again captured the hearts of anime fans globally, claiming the number one spot in four countries: Italy, Germany, France, and Thailand. Inspired by the leader of the biggest rock band in Japanese history, X Japan, yoshikitty not only has loyal anime fans, but also the passionate fan base of international icon Yoshiki backing them to the top.

The contest brings together the most popular Sanrio characters, with yoshikitty having earned a top 10 ranking in the contest every year since 2015. This year, yoshikitty placed 11th overall in a stiff competition against the likes of beloved anime characters Pom Pom Purin and Cinnamoroll. During the official event, which was broadcast online this year due to the ongoing pandemic, Yoshiki made a special guest appearance to express his gratitude to the fans who supported yoshikitty.

Each year, Sanrio also partners with health-focused electronics company TANITA on special Sanrio character themed pedometers in honor of the contest (past collaborations include Hello Kitty and Cinnamoroll). For the second year running, the official yoshikitty pedometer received the highest number of advance sales, and in honor of this achievement, yoshikitty was also presented with the “TANITA Award”.

yoshikitty was introduced by the Sanrio brand in 2009 and takes edgy cues from real life muse and Japanese music icon Yoshiki – who was named “one of the most influential musicians and composers in Japanese history” (Consequence of Sound). In addition to selling over 30 million singles and albums combined with X Japan, Yoshiki has also collaborated with the likes of Bono, Gene Simmons of KISS, Jennifer Hudson, Nicole Sherzinger, Queen, St. Vincent, Stan Lee, and will.i.am. Yoshiki also composed the official theme song for Hello Kitty, dedicating the anthem to his close friend and the son of Sanrio founder Shintaro Kunihiko, Tsuji Kunihiko.

Yoshiki – composer, producer, classically trained pianist, rock drummer, and leader of rock group X JAPAN – has lived in Los Angeles for over 20 years and owns a recording studio in Hollywood. As a rare artist who has roots in the U.S. and Japan, his position as a world artist makes him aware of the challenges facing not only these countries, but the global music industry as well. In recognition of years of his active philanthropy and influence, Yoshiki was selected as one of Forbes Asia’s 30 Heroes of Philanthropy in 2019. In March, he was also awarded a Medal of Honor by the Government of Japan. His philanthropy includes his 2021 MusiCares donation, which follows up the $100,000 he donated in March 2020, as well as $100,000 in October 2017. Yoshiki also recently collaborated with Disney on his music documentary My Music Story, which is now airing on Disney+ in the U.S. He is currently working on a number of music and film projects due for release throughout 2021. More info can be found here: https://www.yoshiki.net/press.html.