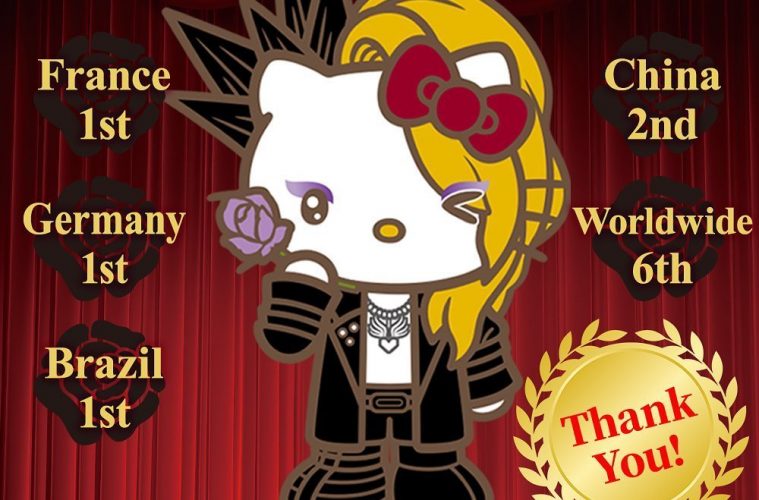 Yoshikitty defeats Hello Kitty to win No.1 in France, Germany, and Brazil, No.2 in China

The final results of the 2020 Sanrio Character Ranking were announced on June 8, and Yoshikitty defeated Hello Kitty to win no.1 in France, Germany, and Brazil, and no.2 in China.

The Sanrio Character Ranking competition grows more intense every year, and the 2020 event allowed fans from all over the world to vote on a selection of Sanrio’s 80 most popular characters. Yoshikitty’s massive international support brought the character to no.6 worldwide, placing in the Top 10 for the fifth straight year.

In addition to online voting, other voting methods included purchases at Sanrio shops, which overwhelmed demand for the already-popular Yoshikitty items. Stores sold out immediately, and orders were backed up for months.

Even with such a voting handicap, Yoshikitty still won a top position among other iconic characters such as Hello Kitty, Cinnamoroll, and Pompompurin.

Yoshikitty was born in 2009 as an unprecedented character who is modeled after a real person, rock star and composer YOSHIKI. With more than 500 items on sale, Yoshikitty is associated with many top brands.

This year, Yoshikitty also won first place among all 80 characters in the pre-sale of the “Sanrio Character Pedometer”. Because of the award, the decision was made to create the special edition “Yoshikitty Digital Health Meter” just for this character in addition to the “Yoshikitty Pedometer”, with sales starting June 9.

YOSHIKI commented, “Thanks to everyone who voted for Yoshikitty. I’m so happy to see the support from fans not just in Japan but also from around the world.”

YOSHIKI, who composed the official theme song for Hello Kitty, teased fans with the idea that “Maybe I’ll compose a theme song for Yoshikitty to say ‘thank you’ for all the support. Not only that, I would like to continue delivering wonderful music so that I can give back to everyone as much as possible.”