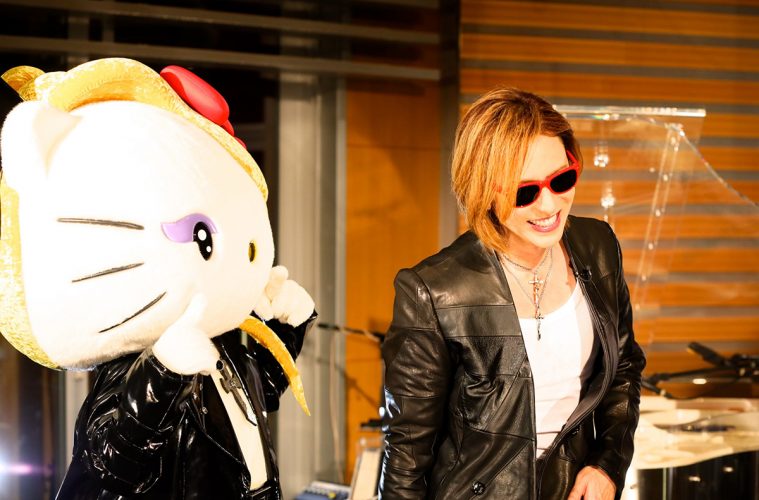 aliJuly 1, 2018
Jrock NewsNews0 Comments 0
Yoshikitty’s worldwide popularity has taken a great leap forward by placing third in the 2018 Sanrio Character Awards, announced July 1st at Sanrio Puroland in Tokyo.
This year’s results mark the highest ranking ever for Yoshikitty, who has now placed in the top 10 for three years in a row. The popular character, based on X Japan leader YOSHIKI and created by Hello Kitty designer Yuko Yamaguchi, also achieved first placed in the regional rankings in China, Italy, Germany, and France.

Fans from around the world voted to support Yoshikitty in the 2018 Sanrio Character Awards, which went on for one month, starting on Thursday, May 10th, with results announced on July 1st. In total, 465,907 votes were cast in favor of Yoshikitty, who is the only Sanrio character modeled after an existing person.

Yoshikitty has appeared in the Character Awards for four consecutive years starting in 2015, and has grown in popularity in that time through its battles with other characters in the rankings, including beating the ever-popular Hello Kitty in this year’s voting. Boosted by YOSHIKI’s and X JAPAN’s international popularity, Yoshikitty placed in the top 3 in seven out of eleven countries officially represented, in competition with the top 100 Sanrio characters.
First Place – China, Italy, Germany, France
Second Place – South Korea, Brazil
Third Place – Great Britain

“I’m currently hard at work wrapping up recording in L.A., so this was wonderful to hear,” said YOSHIKI. “I sincerely thank all of the fans who voted for Yoshikitty and everybody who has cheered me on. When I return to Japan the week after next, I’ll be sure to thank Yoshikitty directly!” he added, hinting at a possible appearance by the character at YOSHIKI’s sold-out dinner show concert series later this month.