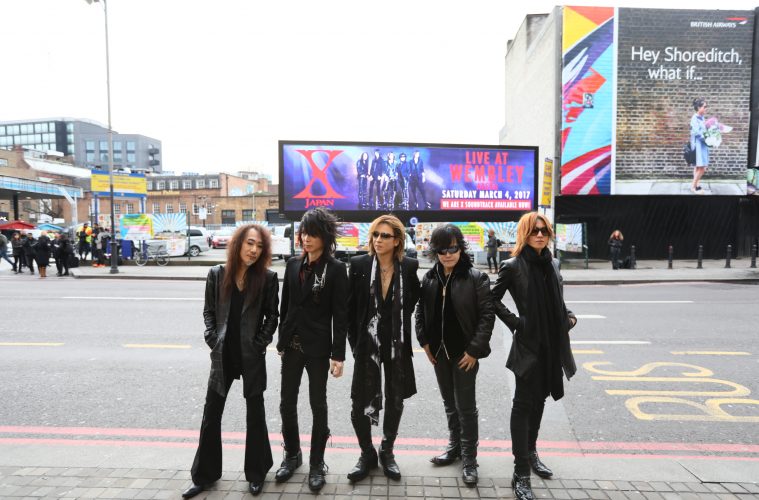 X JAPAN are back and are ready to take over the UK’s music and cinema scene with an insane week of events leading up to their highly anticipated #XDAY show at the SSE Wembley Arena. From the UK Premiere of “WE ARE X” to a HMV instore CD Signing for the newly released “WE ARE X” soundtrack, X JAPAN know how to get their fans hyped up!

To kick off an exciting weekend, X JAPAN decided to hold an instore signing with all members at HMV on Oxford Street, London’s busiest shopping street, with tickets limited to 400 people. Tickets for the signing didn’t take too long to sell out. On the day, there were already fans queuing a few hours prior to the event starting. From around 4pm, it was already crowded, and the line had been split off into three sections; one in store, one outside the store and one around the corner of the store. X JAPAN members arrived close to the 5.30pm start time and fans were slowly ushered into the private signing room.

The signing itself was fairly quick, almost like a fleeting dream. Walking into the room, you joined the snaking queue that lead up to the signing desk where all the members were sat dressed in black, wearing sunglasses and signing each album cover before passing it on. Fans were up close with the band, and were allowed to speak to them. But it was all over so quickly due to security moving each fan on. There was no time to linger about inside the signing room and put your bag back on or compose yourself either. It was strictly in, sign and out.

The aftermath of the signing was chaos on Oxford Street, fans who had their albums signed were already outside gathering for the departure of the band. Around an hour and a half had passed and the signing itself was over, so now fans were eagerly awaiting X JAPAN’s departure. But it being 7pm, in London, on it’s busiest street, it wasn’t so easy for the band to leave. A crowd of 500 people gathered around the HMV store exit, even blocking the main road and the opposite side of the street from the store to see the band leaving. Security had a great struggle trying to get fans and shoppers caught up in the madness back onto the pavement as each member departed in their cars. X JAPAN literally stopped traffic! Now all that there was left to do was to wait for #Xday the next day.

It was a cold but dry morning when the day of the concert arrived, despite the weather forecast saying it would rain. There were already a lot of fans by the time midday arrived, all of them hanging around the grounds of the SSE Wembley arena. Many started queuing for merchandise an hour and a half before the merch booth even opened. By the time the merch went on sale, the queue was snaking around the front of the arena grounds. Many fans gathered to sign flags, fanbooks of street teams and take photos with friends and cosplayers. The atmosphere was very united as fans waited outside for the concert.

Around 2.30pm, it was time for VIP ticket holders to go in for their Soundcheck Experience. Walking into the almost empty arena lobby, you could hear the sound of X filling the venue already. VIP fans hurried into the dimly lit arena where the band were already in the midst of their soundcheck, with staff busy working and the band running through songs as the lighting technicians arranged the lighting. The VIPs were allowed to watch around 30 minutes of the sound check before leaving to wait for their onstage photos. However, the soundcheck ran over schedule with the band still soundchecking when general ticket holders were allowed into the venue. VIP fans were cordoned off as they waited for the stage to be cleared for their photos. Soon enough the band left the stage to prepare for the show, allowing both general and VIP ticket holders into the main arena. VIP fans were lead to the empty stage where they got on in groups of 10 to have their photo taken in front of Yoshiki’s famous Tama drum kit, then ushered off to their seats for the show.

Once VIP photos were complete, a white screen dropped in front of the stage and soon #XDAY commenced with an exclusive cut of the “WE ARE X” film. This hour long cut made especially for #XDay had not been seen by the band prior to the show. The audience went silent as they watched the story of X JAPAN, all eyes completely mesmerised. As the film drew to a close, the white screen fell to the iconic opening of “Rusty Nail” and the silhouettes of the band as they began to play. It was a perfect cut from film to show.

The audience rose to their feet, hands in the air and cheers filled the packed venue. Wembley arena had come to life with the energy of X JAPAN! “Rusty Nail” soon transitioned into a new song; “HERO”, which had only ever been played to Japanese audiences. Even though it was a new song, the energy of the fans didn’t falter in the slightest. The lyrics to “HERO” were entirely in English so it wasn’t hard for the fans to soon join in with the chorus. Moving on from “HERO”, X then played one of their more well known songs; JADE. This was an audience favourite with everyone singing along and a spectacular laser show to accompany it.

The next song, required audience interaction; well their voices. Yoshiki and Toshl spoke to the audience, greeting London and welcoming Pata back, before telling them that they were 99% done with X Japan’s new album, to which Yoshiki laughed saying fans wouldn’t believe them. Yoshiki then told the crowd that they needed their help to complete the recording of “KISS THE SKY”. Taking to the piano, Yoshiki played the melody which the crowd had to sing to and Toshl explained the lyrics which they had to sing, which consisted of “Whoa…whoa…whoa…”. With one practice the crowd had already got the grasp of the song and recording began. Wembley united to sing along with Yoshiki and Toshl.

After the recording was complete, Pata, Sugizo and Heath came back onto the stage for another new song, composed by Sugizo called “BENEATH THE SKIN”. This had the crowd headbanging in the chorus, the sound of the song different to X’s latest singles like “JADE” or “BORN TO BE FREE”.  After “BENEATH THE SKIN”, the stage belonged to Pata and Heath as they did their solos and were later joined by Toshl for “DRAIN” with added hide vocals which touched the audience.

Sugizo took to the stage alone after “DRAIN” in a replica of David Bowie’s Union Jack jacket and his violin. What he played next, no one expected. “Life on Mars” filled the venue, a beautiful and touching rendition by Sugizo’s violin. There weren’t many dry eyes in the room after his tribute to the late David Bowie. From one heart felt moment to another, the rest of the band soon joined Sugizo again to play new ballad “LA VENUS” from “WE ARE X”.

With all these new songs, Yoshiki and Toshl surprised the crowd and themselves with an impromptu rendition of “Say Anything”. It all started because Yoshiki asked Toshl to “Say something. Say Anything.”. Before they knew it, the crowd and Toshl had sung up to the first chorus before Yoshiki stopped playing, laughing as he had just realised his own joke.

The final two songs of the set were another two fan favourites; new song “BORN TO BE FREE” and classic “Kurenai” which had streamer cannons explode red, blue and silver streamers into the air and onto the crowd. Wembley arena was filled to the brim with excitement, energy and streamers as the band played the last notes of “Kurenai” and left the stage. Leaving the audience wanting more. But it’s not an X JAPAN show without numerous encores, this was only the tip of the iceberg.

After a short break filled with the crowd shouting the band’s signature “WE ARE….X!” chant, the band soon returned to the stage for their first encore of the night, opening with a piano solo of “Moonlight Sonata” by Yoshiki on his Crystal Grand Piano that followed with an epic drum solo which left the audience in awe at the sheer amount of energy and power he had. In contrast to the harsh, upbeat drumming, the song that followed Yoshiki’s explosive drum solo was new ballad “WITHOUT YOU”. Another heart-warming moment fans sang along to the song which was written by Yoshiki and sang beautifully by Toshl. To end this encore, X JAPAN decided to liven things up with another two Iconic tracks; “I.V.” from the SAW IV soundtrack and their signature live song “X” which had the crowd doing the “X Jump” during the chorus and the entire band yelling “WE ARE…” to which the crowd yelled “X!”.

Toshl stated that “X” was their last song, so some fans began to leave the venue after it ended, but the venue still remained dimly lit and cameras were still rolling for the live broadcast. The show was far from over.

The break between the first encore and second was more lengthy compared to the first but the wait was completely worth it, with Yoshiki returning to the stage with another tribute to another great British band, Queen. The sweet piano cover of “Bohemian Rhapsody” had the international crowd singing along as one. But Yoshiki’s tribute to British artists didn’t end there, he spoke to the crowd, telling them how Queen and David Bowie had influenced himself and X JAPAN  to which the crowd cheered loudly to Bowie’s mention. He turned to his piano again and began to play “Space Oddity” leaving Wembley cheering and teary eyed.

The tears of sadness and happiness in the arena continued to fall as Yoshiki spoke about his best memories with X, Taiji and hide. Mentioning their fight with mosquitos in the park and hide’s night time driving habits. The next song “Endless Rain” was dedicated to the fans along with Taiji and hide. The crowd once again sang in unison as the band played to a backdrop of old X photos and clips.

To finish off an emotional night, the band ended their 3 hour long show with “ART OF LIFE” but not in its thirty minute entirety, but just the second and third movement as featured on the “WE ARE X” soundtrack. As the last song ended, the crowd were all on their feet, cheering and arms crossed in an “X”. London had officially been X’ed! The band said their goodbyes, throwing water bottles, roses, guitar plectrums and drum sticks to the crowd before completing the night with selfies and crowd shots.

Yoshiki promised a return to London, but when, we are not sure. Let’s hope it not too long! Maybe after the release of the long awaited album? 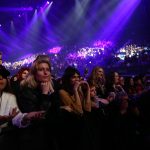 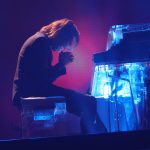 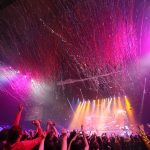 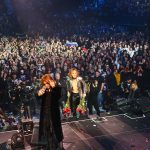 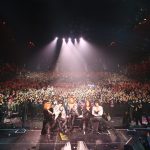 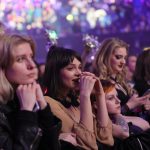 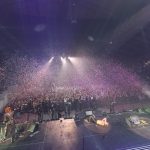 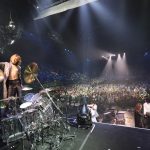 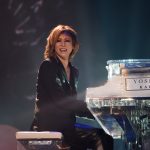 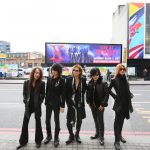 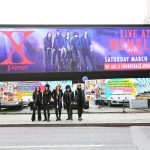 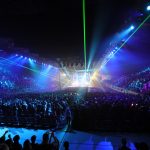 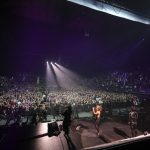 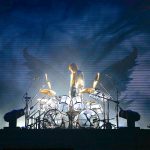