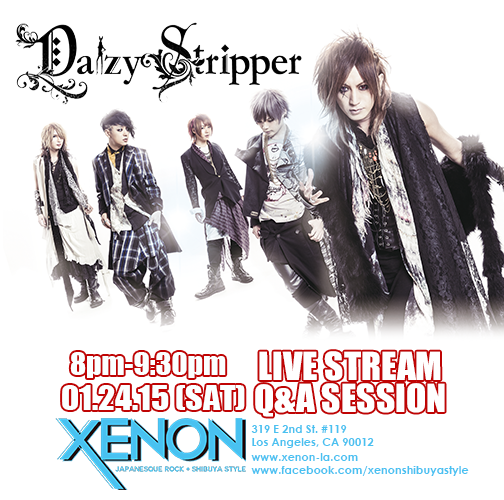 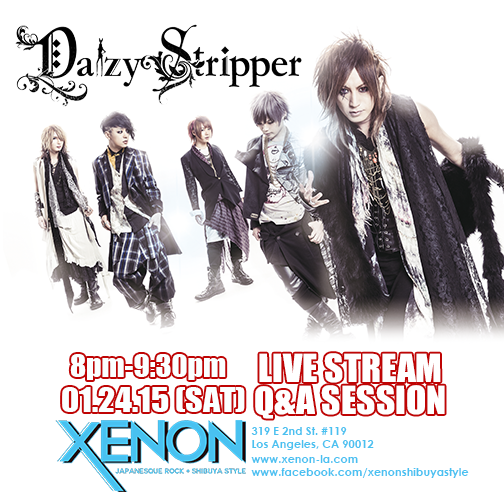 Fans are able to ask questions to the band directly through live streaming chat, as well as answer questions from the band. This is a great opportunity for fans in the States to engage and gather new upcoming information’s from the band.

No cover fee will be charged, absolutely free event. Hours for the event will be from 8:00pm-9:00pm.

ABOUT DaizyStripper: DaizyStripper was founded in 2007, and the band made their way to the top of the Japanese ORICON indie charts within two years. Their success story continued with many sold out releases, shows and even oversea activities in the U.S, Europe and Canada. With the founding members, Vocal: YU-GIRI, Guitar: NAO, Bass: REI, Drums&Piano: KAZAMI, DaizyStripper began their activities with in March 2007. Later, on June 18th Their first event called “Sakuran strip” under their own patronage took place on August 23rd, accompanied by the release of their first demo CD, which’s sales were limited to the number visitors of that day. On February 13th of 2009 their first Single+DVD「Dandalion」 was released, followed along with a second press of the CD, selling rapidly and reached the TOP of the ORICON indies charts. One year from their founding, as their name bursted throughout Japan, the band had performed at AJINOMOTO Stadium for X-Japan’s guitarist, hide’s memorial event [hide memorial summit]. In June of the same year, DaizyStripper gave their first one man show at Shibuya BOXX, also conducted as their 1st Anniversary event with more than 40 journalists and media outside visual kei showing interest. During the summer of that year DaizyStripper also made their first appearance overseas at OTAKON in Baltimore, USA. With their one-man tour, they could put another big success to their record, just like the following release of their 4th single [TRUTH] on October 15th – it ranked No.1 within the ORICON indies charts once again. Due to popular demand, a second press of [CROSS] and the song [TRUTH] were released for sale nationwide on December 10th.

Along with the success of their one-man show in Shibuya O-WEST in March 2009, from July, the band held a nationwide tour, which SOLD OUT completely for all eight locations. At their TOUR FINAL which was held at Ebisu Liquid Room. In 2011, the band had done their first show in Taiwan. The same year their 9th single, “Setsubou no Freesia” became the ending theme song for “YU-GI-OH”. In December 2013, leader and guitarist of the band MAYU announced a break from the band, and the rest of the four members will be continuing their activities without him.

DaizyStripper appeared for the first time in Canada at Animethon 19 and Anime North 2014. With Mayu returning to the band, DaizyStipper released their new single “ARREST” on January 21st, the band is now back with the original five members.