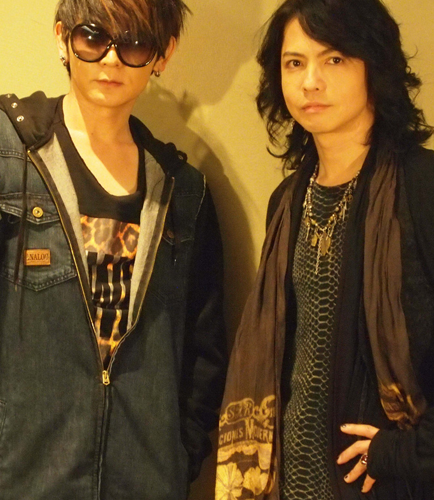 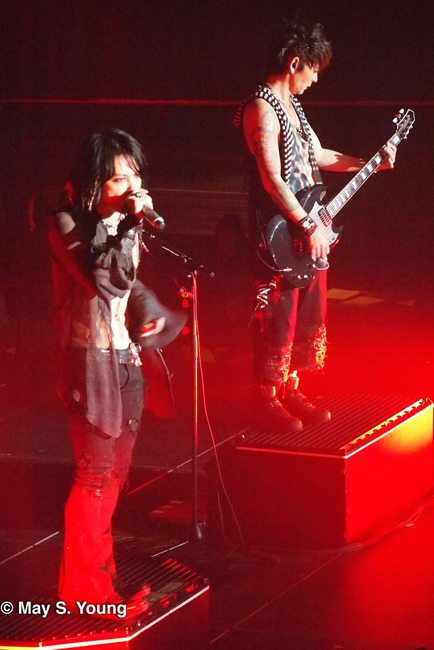 Wet and chilled to the bone from waiting 5+ hours in the cold, snowy weather of New York, not even the promise of entrance into the Roseland Ballroom could warm up the crowd outside. There was only one thing that could: VAMPS.  The atmosphere inside Roseland buzzed with excitement. Even with twenty minutes until the show started, everyone tried to press as close to the stage as possible. I heard a rapid, enthusiastic conversation in Japanese behind me, and I only understood one word: “Hyde.” Everyone couldn’t wait for the main act!

Opening band Killcode started the night, and in the world of opening acts they were most definitely a pleasant surprise. Lead singer Tom sang his heart out, and it seemed like he was giving all of his energy to the crowd. It worked; there wasn’t one person in the crowd who wasn’t at least bobbing their head during the performance. It was obvious from one song that Killcode loved being onstage; they looked as comfortable up there as though they had been born on it. By the time they left, all traces of chill were gone and the crowd was completely energized.

Next was the second opening, Sid Wilson from Slipknot. If Killcode was what re-energized the crowd, then Sid Wilson, with his turntables and pounding beats, is what seduced us. It was a change in genre, but it worked its magic: The tracks worked through the crowd, and made excitement rise and pound with the lights that danced around on stage. When he left, it was to screaming cheers.

And then, finally, it was the moment we all waited for: VAMPS. When the band hit the stage, there wasn’t an ounce of silence in the room. The screams and shouts of the fans reverberated through the ballroom, and everyone moved that much closer to the stage. The screams only grew louder as HYDE, with feathers in his hair and glowing eyes, appeared and stole the hearts of the crowd. “Vampire Depression” started it off, and as the crowd began to move (heads banging, hands thrown in the air), I heard a man behind me singing along, and instantly I knew the energy was at an all-time high.

I’ve never had the opportunity to go to a VAMPS concert, so I wasn’t sure what to expect. But whatever my expectations were, the band went far beyond them. HYDE’s vocals were spot on, and filled with the same raw passion and energy as his stage presence. Bassist Ju-ken all but bounced around the stage, smiling and waving at the crowd, having the time of his life, and guitarist K.A.Z. rounded the performance off with an almost no-nonsense style of playing—which was broken periodically by his own little tricks, such as throwing the guitar around his neck.

I didn’t have to know the history of the members to know VAMPS were veterans in the music industry; even someone who’d never seen them perform before would realize it. They moved smoothly from song to song, holding nothing back in their performance. Excitement reached a peak during “Hunting,” when HYDE had a little fun with the audience by saying he felt empty, only to demand his lamb. The audience went from sympathetic to crazy, as HYDE attempted to find the “craziest one.”  As HYDE, K.A.Z, and Ju-ken moved to the edges of the stage and peered over the crowd, searching, everyone let their “crazy” show.

The down-time between the main session and the encore did nothing to dampen the spirits of the fans, and shouts and chants of “Bang On Stomp Everybody!” continued until the band returned. Appropriately, “Revolution” opened the encore, and the chants and screams continued, with HYDE egging the crowd on. The set moved into “Sweet Dreams,” giving a breather without ever dropping the level of energy, ending with at least one fan in tears.  A surprise came in the form of a cake, as it was drummer Arimatsu’s birthday. For a few moments he took the spotlight, accepting the microphone from HYDE and saying how happy he was to be there. He thanked the audience for coming, blew out the candles, and was given the opportunity to have a moment for himself with a fierce drum solo.

The concert ended on “Sex Blood Rock N’ Roll,” and as K.A.Z and Ju-ken threw their picks to the crowd, HYDE ripped the deep red petals from roses and threw them into the crowd. Only when the band disappeared from the stage for good did anybody move, and it was a mad rush to the merch table to pick up a memento from the night.

This concert was the experience of a life time. Their professionalism and their love for music was evident from the very beginning, and it was amazing to finally see an artist I’ve been a fan of for so long perform live. VAMPS went beyond all expectations, and it was worth the cold I picked up the next day to see them. My respect for the band grew after the concert, and although they’re gone now, I definitely plan on seeing them again.

Photography by: May Young (see her gallery here: http://www.flickr.com/gungirlnewyork) 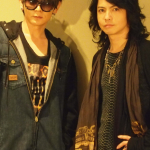 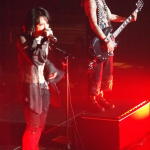 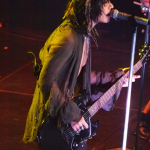 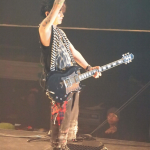 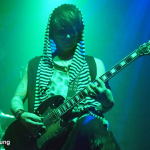 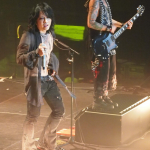 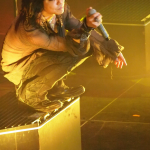 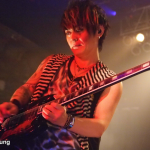 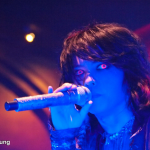 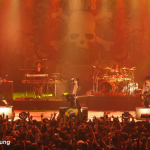