Tomoyasu Hotei at the Highline Ballroom

On November 14th, Tomoyasu Hotei took over New York City’s Highline Ballroom for a sold out performance. Hotei, whose roots include the band BOØWY (pronounced like ‘boy’), has been part of an influential movement in the Japanese music industry, which continues to this day. Over the years, he’s furthered his skill and shared his talent with various sources, collaborating with artists and performing around the world. Arguably, his most well known achievement in the Western world is the theme “Battle without Honor or Humanity” from the Quinton Tarantino motion picture Kill Bill.

The occasional theme song is just a taste of the talent and expertise of this guitar virtuoso. He’s sung in many tracks, as he did during his performance in New York City. Complementing his music were musicians:

Over the years, Hotei has produced albums that sell millions, cultivating an international fanbase and demonstrating time and time again why he’s one of the top guitarists in the world. That night in New York City, the floor and tables of the Highline Ballroom were packed wall to wall with fans that cheered and rocked to a collection of original hits, including his signature Kill Bill theme, Mission Impossible and a classic from BOØWY.

By the time the set was finished, fans were still energized enough to leave in small droves. Quite a few had traveled long distances for a chance to see the famed guitarist in such an intimate concert setting. For one night at least, New York City was brighter for many.

Special thanks to May Young for the following photos! 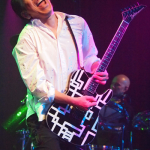 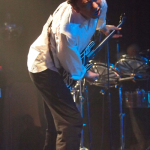 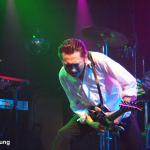