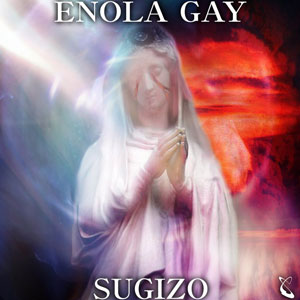 Is it possible to communicate the tragedy and destruction in the wake of nuclear war through a song? Can a guitar protest the potential of future bombings?

Sugizo says ‘yes’ to both questions.

His new single, “Enola Gay,” released on Aug. 15, is a perfect mixture of serenity and intensity — an incredible blend of new age sound and old school talent commemorating the end of the last war to divide the world. History buffs will immediately the notice the significance of the song’s title: The Enola Gay was the bomber to drop the nuclear bomb on Hiroshima—the first of the two bombs that changed the world.

Now Sugizo, too, is trying to change the world. “This song is the antithesis of nuclear weapon,” he said in a note on his Facebook, “… we cannot coexist together with nuclear weapons … now is the time to continue sharing this intention until the world abandons nuclear weapons altogether.”

That’s a tall order for just one song.

The opening of “Enola Gay” is intense and interesting, something that draws the attention of the listener immediately. Wrapped up deep inside this intensity is underlying feeling of longing and despair, something any other musician would find difficult to communicate through lyric-less instrumentals and vocals. Yet Sugizo manages to pull off this seemingly impossible feat with the effortlessness and skill that makes the man the living legend he is.

The song is rich in electronic elements, which are simultaneously peaceful and intriguing. The guitar riffs add a darker edge to the calming rhythms and vocals; the drums provide a hint of drama to an already climatic song. Still through his guitar, Sugizo manages much more than to just add a melody.

“My guitar continues crying out, evoking the image of a massacre,” said Sugizo. And the guitar really does sound reflect the sounds of despair, tearing through the peaceful electronic elements of the song passionately, protesting the sufferings of not only the past generation, but the potential turmoil of future generations in the post-nuclear war.

With each listen, something new and interesting can be discovered hidden deep in the song, inspiring new feelings or ideas.

Complexity and simplicity are juxtaposed in a way makes Enola Gay ideal listening for any task: jogging, studying, driving or reading. But don’t write off this single as merely “background music” or even “a tribute to peace” — the song’s depth and beauty lends to the favorite-song potential of this powerful, historical piece.