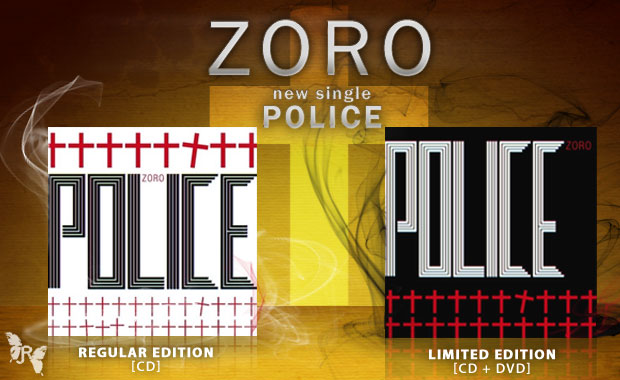 ZORO describes their new single POLICE as “electronic dance rock,” and that’s probably the best way to describe this single.  This is the first single since the guitarist, Taizo, and drummer, Yuuya, left back in December 2010, and while it’s still has a ZORO feel,  listeners  will easily notice the lack of guitarist and drummer.

Both instruments are still present in the songs, but they aren’t as important as before.  It seems that the “electronic dance” part is more important than the “rock” aspect of their sound this time around. In that vein, Ryuuji has continued to mask his vocals with synthesizers, which can have a neat effect, but after a while leave s the listener just wanting to hear Ryuuji’s singing voice itself.

In the title track, synths play a bigger part in the song than the guitar does. The guitar, while almost always present, seems to fade into the background. It ‘s the strongest song on the single and so it’s as to why it chosen as the title track.  It’s also the most thought out song on the single, with the various layering of instruments and vocals — and of course, it’s catchy. This song epitomizes “electric dance rock,” and if this song is the direction ZORO has decided to go in after the departure of their guitarist and drummer, then this is definitely a good start.

The second track seems to be an attempt at a more serious song on the single. However, they seem to have trouble bridging the gap between their cheerful, bouncy style and a more sentimental song. It sounds more like older ZORO, with the guitar not taking a backseat, but it still seems to be trying to keep elements of new ZORO and it doesn’t quite marry the two styles well.

However, 109 is right back to the same upbeat feel of POLICE.  Even more so in this song, the guitar seems to fade away to the synthesizers and the bass. The song is like a speeding train and you either jump on and enjoy the ride or get run over by it. It’s easily the most energetic song on the single. Nevertheless, it’s a bit mindless with how repetitive it is.

POLICE was a valiant effort from the two remaining members, Ryuuji and Tatsuhi while they are still recruiting for a new guitarist and drummer.  There are weaknesses evident without a permanent guitarist or drummer, but they obviously try to counteract this.  ZORO is moving more toward the “electronic dance” feel they’ve always possessed but it wasn’t made as  prevalent until this single. And they seem to de-emphasize the rock aspect of their style that they’ve always had, despite still claiming it as their own.  POLICE is a catchy single and it’s fun to listen to. Hopefully by the time of their next release they will have worked out the kinks.